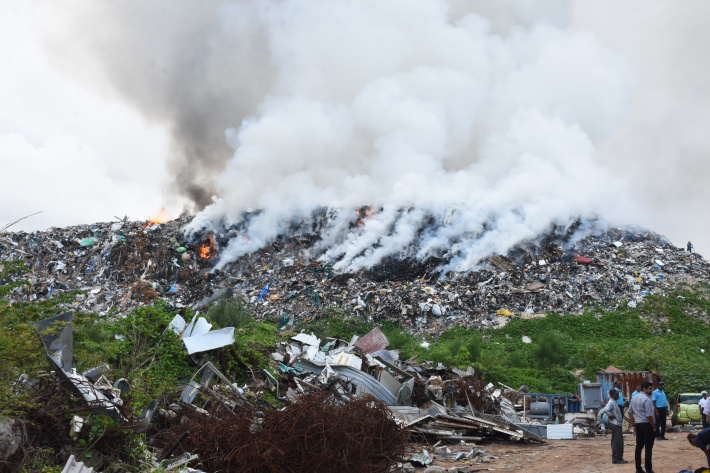 The Seychelles Fire and Rescue Services Agency and other agencies worked tirelessly to combat a fire at the landfill that broke out at around 1.35pm yesterday.

The fiery blaze started on landfill two, closest to the Vijay Construction property, and had by the evening hours spread throughout the landfill.

Senior divisional officer of the Seychelles Fire and Rescue Services Agency (SFRSA) Jones Madeleine noted that a fire truck was deployed as soon as the report was made and upon arriving and assessing the situation, officers on scene called for backup.

"By the time we arrived, the fire had already taken over and was burning an area measuring 120 metres by some 60 to 80 metres," Mr Madeleine noted.

The fire had spread a further 20 to 30 metres by the evening.

Asides from the SFRSA, other response authorities including the Disaster Risk Management Division (DRMD) were assisting with the efforts to combat the blaze.

Covering the burning landfill with coral fill was among the options, with the assistance of heavy duty pick-up trucks and excavators working to compact the coral fill.

Additionally, Vijay Construction's dredger was called in to assist the operations, especially on the outskirts of the site, to prevent the fire spreading to landfill 1.

Stronger winds during the evening hours not only meant that the blaze was spreading and burning faster than earlier, but also that fumes were blowing in all directions, reaching different regions around the main island, and even beyond.

"We are trying our utmost best, and we will go up until we are satisfied that the fire is under control," said Mr Madeleine.

By around 8pm, 30 SFRSA officers were actively working tirelessly on scene.

The DRDM established a command post on the Vijay Construction property to monitor and coordinate the operations.

The Seychelles police force and Landscape and Waste Management Agency (LWMA) were also on scene assisting in the operation.

A number of private contractors also responded to the call for assistance.

Meanwhile, the Industrial Estates Authority (IEA) through the Ministry of Investment, Entrepreneurship and Industry issued a press release at 11.12 last night to inform members of the public to avoid going into the Providence Industrial Zone area today (Wednesday September 28).

This decision has been taken in the interest of safeguarding people’s health and upholding public security.

IEA said it counts on everyone’s cooperation while all relevant authorities continue to work on containing the situation.

At around 8pm, Lands and Housing Minister Billy Rangasamy as well as Minister for Investment, Entrepreneurship and Industry Devika Vidot were on site to assess the situation and they were briefed on what happened.

The accompanying photos show some highlights of the fire and efforts to contain it. 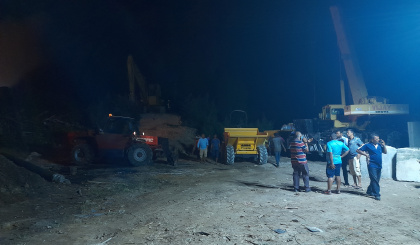 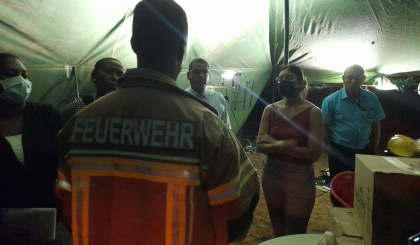 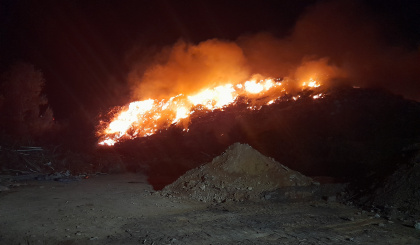