The Independent School secondary wildlife club students, Eco school leader and family members recently took part in a clean-up activity along the Salazie trail at Sans Souci. The activity was originally organised to commemorate the World Environment Day on June 5 but was postponed because of bad weather conditions. At last, the very excited group was able to finally make the event happen.

The clean-up was mostly concentrated on the first 300 metres where the majority of waste was found. The area is made up of an old motorable access way which appears to be used by trucks to fly tip their waste. Among the rubbish collected by the students were lots of large bits of plastic, baby/hand wipes, glass and plastic bottles, cans, containers and some scrap metal. Altogether, the students were able to collect 8 gunny bags of waste; unfortunately, they had to leave behind some plastic that was too hard to unearth which gave the impression that the rubbish had been there for quite some time.

Once the clean-up was done, the students were able to walk the rest of the trail. Along the hike, they were lucky to encounter two of our endemics: a wolf snake slithering on the ground and a tiger chameleon camouflaging on a branch. Despite not having enough time to reach the summit, the students were able to have a short break while enjoying a spectacular view of the Morne Blanc peak and the vast blue ocean and, of course, capturing the moment with pictures and selfies!

At the end of the day, once all the rubbish collected had been discarded, the students felt a sense of accomplishment and they were proud of their ‘small’ action to make a difference and contribute to protecting our ‘ONLY ONE EARTH’.

The students would like to take this opportunity to thank everyone who was generous enough to sponsor them for such a cause. The funds raised as part of the activity will be used by the students to undertake other activities that will improve the Seychelles environment. 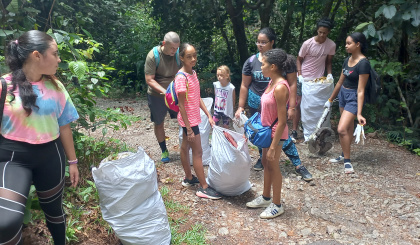