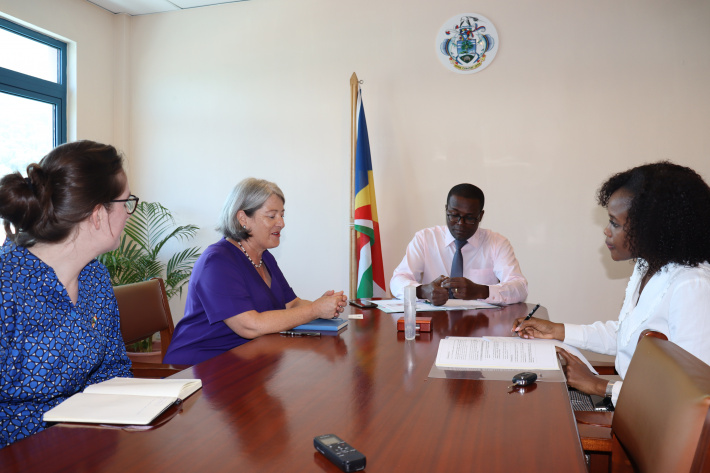 Minister Joubert during his meeting with Ambassador O’Neil

Ambassador of the Republic of Ireland to the Republic of Seychelles, Mary O’Neill paid a courtesy call on Agriculture, Climate Change and Environment Minister Flavien Joubert on Thursday.

Ambassador O’Neill met Minister Joubert at his secretariat, Unity House on Thursday afternoon. She was accompanied by Sinead Collins, the second secretary.

Minister Flavien Joubert and Ambassador O’Neil centered their discussions on the upcoming 27th Conference of the Parties (COP 27) to the United Nations Framework Convention on Climate Change (UNFCCC) to be held from November 6-11, 2022, in Sharm el-Sheikh, Egypt.

They also discussed the challenges of small islands developing states (Sids) when it comes to climate change and Ambassador O’Neil declared that Ireland is also experiencing drastic rise in sea levels as well as temperatures. They also addressed the need for financial and technical support to assist vulnerable countries.

Talking about his ministry, Minister Flavien Joubert noted that they are working on various projects to realise the main target highlighted in the National Determined Contribution (NDC), that is reducing economy wide absolute greenhouse gas (GHG) emissions by 293.8 ktCO2e in 2030 (26.4%).

Minister Joubert proudly mentioned the recent success of the Blue Carbon Roadmap and outlined the need to invite key partners on board to pave the way for the implementation of renewable energy that will additionally help achieve the NDC commitment.

To conclude, the minister expressed the need for both nations to identify areas for future cooperation especially through exchange programmes, all to ensure a sustainable and secure environment for both.