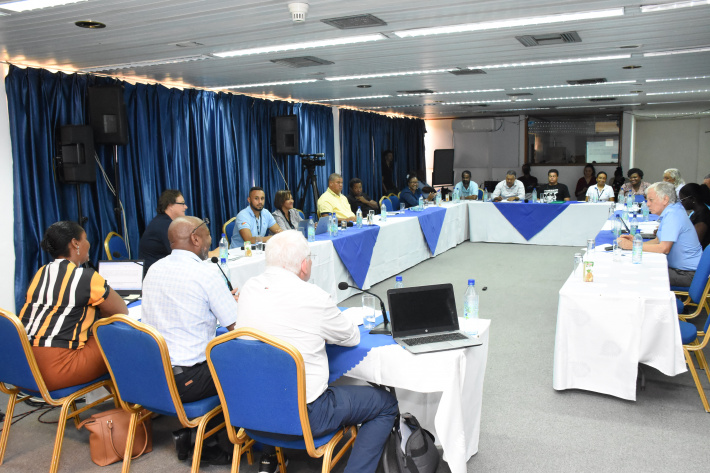 Highlighting the need for better organisation among fishers

The 17th meeting which was held at the ICCS yesterday saw various issues being raised, including the applicability of the measures to recreational fishers, and enforcement of regulations at sea, especially in relation to the activity of the super yachts using dories during their fishing trips.

Another major concern is a possible algal bloom which has occurred in recent weeks, especially around the Northern region of Mahé.

Concerned members of the public have been sending reports to the SFA of the sighting of dead fish washed up ashore in the North of Mahé, specifically around Perseverance and La Retraite area.

The Research section of the SFA suspected that a Harmful Algal Bloom event may be occurring as some fishers had reported water discoloration further offshore in the past weeks.

The event may be related to changes in wind and current direction, causing the blooms to move towards the Northern part of the island, a situation that may be further aggravated due to relatively hot weather condition and poor water circulation.

With regard to communication, the Seychelles Fishing Authority (SFA) has continued with its education and awareness plan, although regular visits at common landing sites, namely, Bel Ombre, Cascade, Anse Aux Pins, La Retraite, Victoria Port, and indicate that fishers are aware of the enforcement of measures.

The authority has embarked on partnerships with various organisations including the Seychelles Public Transport Corporation (SPTC), the British high commission and Seychelles Ports Authority (SPA), while discussions are ongoing with the Seychelles Institute of Art and Design (SIAD).

In addition to discussing the developments, the meet was also an opportunity to highlight the various lessons learnt from a peer-to-peer exchange by members of the ICCP to the Shetland Islands (UK), an island archipelago located in the heart of the North Sea.

The committee shared the successes of the exchange, highlighted that fishers and industry in Seychelles could benefit from better organisation, based on lessons learned from the visit relating to how their counterparts take advantage of opportunities for developing their sector, and respond to challenges that are common to fisheries, such as overcapacity, overfishing and conflicts with other maritime users.

Chairman of the Praslin Fishermen’s Association and vice-chair of the ICCP Darrell Green speaking to the press said that the meeting was a fruitful one, especially since the committee discussed at length the recommendation for better organisation within the sector in future.

“An organised fishery sector has a lot of power to work and represent its members. If fishers are each working individually and pulling their own way, we lack unity, we don’t have one voice. We all know that authorities such as the SFA and Ministry of Fisheries prefer to talk to a group of people. We want to avoid situations whereby a fisher who encounters a problem goes to the SFA or makes a call to the minister, such can be done through a representative. We are doing this to facilitate the lives of fishers, we want them to regroup and to do so seriously,” Mr Green said.

The exchange also took the committee to Sete in France, from October 3 to 12. Organised and facilitated by the SWIOFish3 project, the exchange was aimed at providing ICCP stakeholders with the opportunity to learn from the experiences of peers who have been impacted whether positively or negatively by change or performance in how fisheries are managed, and to appreciate the challenges and opportunities of co-management from contexts where such governance systems have operated for longer periods than Seychelles.

Much of the focus going forward will be to explore ways to empower and professionalise fisher associations, including opportunities for associations to provide services to their members and the wider community. As such, the establishment of a federation was considered a priority among the follow-up actions.

“Up until today, it is disorderly. I propose that our associations help each other so we can obtain legal status, have the proper documentation and proper registration with the understanding that an association is a legal entity.”

“Once all these associations have been formed, only then can government step in to help,” Mr Green added.

The association was the driving force behind the efforts to address the issues within the Baie St Anne area. Involving fishers in the legislation-drafting process is more likely to lead to adherence and compliance, he added.

Among other issues on the agenda were feedback from the Stock assessment sub-committee and its recommendations, and the ICCS proposed work for 2023.

All stakeholders were also invited to the consultation sessions for the new Fisheries Act, scheduled for November 23 and 24, at ICCS.