Members of the public interested in undertaking a commercial development on lands available under the ‘Kato Nwanr’ Project in Baie Ste Anne Praslin can now send their expression of interest to the Seychelles Investment Board (SIB).

The announcement was made on Tuesday this week by the Minister for Investment, Entrepreneurship and Industry, Devika Vidot, during a press conference at SIB’s headquarters in Independence House annex, in the presence of SIB’s chief executive, Anne Rosette, and her deputy, Lenny Gabriel.

This follows several site visits and public meetings presided by the head of state, President Wavel Ramkalawan, on the island, throughout the year.

Altogether five plots are available; four plots located in the south west part are reserved for commercial development activities, accommodating retail shops, offices, and outlets for services suitable for commercial area, such as training facilities for both locals and visitors. One plot in the North West area, is reserved for a multi-storey parking with ground floor perimeter retail.

Minister Vidot said anyone who is interested has from now until January, 9, 2023 to collect their documents from SIB to know more about the plots available for lease and what they would need to submit.

“In this first stage, they can register their expression of interest and once this procedure is completed, we can move to the next phase which is when we will officially launch the tender for lease,” explained Minister Vidot.

During that period, SIB will hold pre-submission meetings and site visits. Deadline to submit interest is January 31, 2023.

According to the minister, this will be followed by an evaluation where they will be shortlisted based on the requirement.

“Tender to lease the plots of land will be launched at the beginning of March, where those interested will now be able to submit their proposed project for the land,” said the minister.

It should be noted that there are more plots available under the Kato Nwanr project but SIB will be leasing only five for now, while they sort out the technical aspect for the remaining plots. According to Minister Vidot, the expression of interest for these ones are expected to be at the beginning of January, next year.

Although the expression of interest is open to all locals, the chief executive of SIB, Anne Rosette, is encouraging the Praslinois to come forward and take part in the development of their island.

“There are so many people showing interest and from what I have gathered so far there are a lot of Praslinois and I do hope we see them come forward,” she said.

Minister Vidot has reassured the companies that measures are being taken by her ministry to assist them to invest in such a project.

“One of the issues that was raised at the various public meetings we held was access to finance to invest in such a project and I can reassure the companies that we are already in discussion with several banks to see what can be done to facilitate access to loans,” she explained.

On Tuesday the Ministry for Investment, Entrepreneurship and Industry also announced that the public could submit their expression of interest for a plot of land for the Regatta Development plan in Beau Vallon for the construction of a multi-storey parking, with ground floor.

It follows the recent approval by the project’s development plan by the cabinet of ministers, after several consultation and public meetings.

The expression of interest will be similar to the Kato Nwanr project and within the same deadline.

Minister Vidot explained that while this component is being left to the private sector, the government is focusing on rehabilitating the place and installating the kiosks for the craft vendors.

“We want to keep the area as open as possible, an area where families can spend time together. We also know the place is a regatta site, so we have taken that into consideration as well. So, the government will focus on rehabilitating the place, installing the kiosks so that everything is done in a coordinated way,” she said.

The minister said they are presently communicating with the craft vendors to ensure there is limited disruption in their work while the installation of the kiosks gets underway as well the construction of the multi-storey parking area next year.

“We will need to identify a more conducive area while construction is underway and we are presently looking for an alternative spot,” she said.

The Ministry for Investment, Entrepreneurship and Industry plans to complete the installation of the kiosks by June next year and it said priority will be given to the craft vendors that have a monthly lease agreement with them at present. They will then consider those on the waiting list. 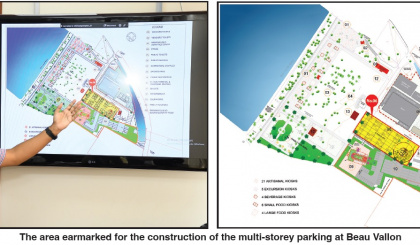