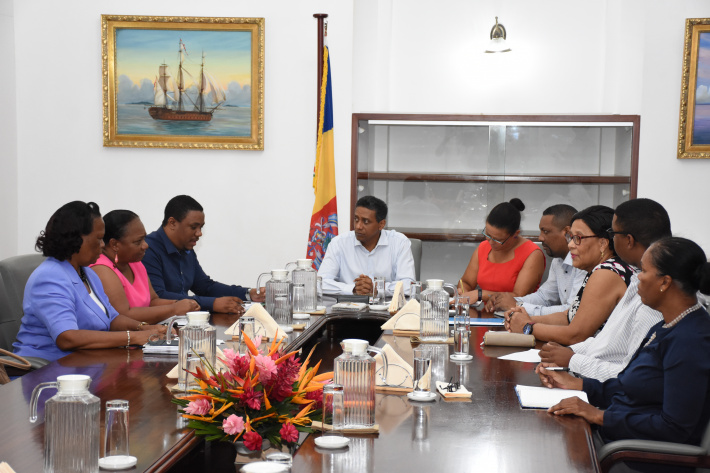 The meeting between President Faure and Ceps members

“In line with the memorandum of understanding that we signed with the government in January last year, this visit serves as one of the conditions under the MoU where we can discuss national issues with the President and the difficulties that Ceps is going through,” said Michel Pierre, chief executive of Ceps.

The proposition for the Rehabilitation Centre at Cap Ternay was discussed during the meeting and Mr Pierre added that Ceps has done assessments so as to also give their input.

He added that their discussion with the president also involved a number of key issues such as drug abuse.

“There are diverse opinions that we have put forth that do not necessarily align with the government’s such as the location of the rehabilitation centre,” he said.

He added that the government should collaborate more with non-governmental organisations such as Apdar in order to be able to tackle the drug problem in Seychelles.

Another topic they discussed with the president was the gender based violence shelter that Ceps is currently implementing and how government will be developing and constructing a permanent centre.

Mr Pierre noted that the government has assured them that a piece of land has been set aside for the shelter to be built on.

Various national issues affecting civil societies and how best they can work with the executive to benefit all Seychellois were also discussed.