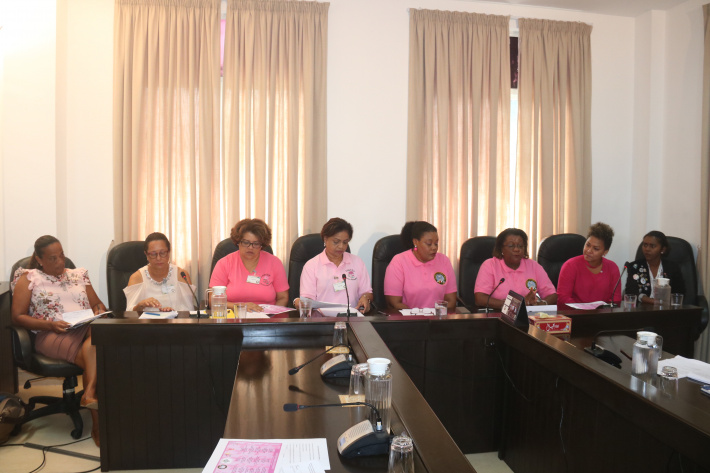 In commemoration of cancer awareness month in October 2019 the Women’s Parliamentary Caucus in partnership with the Ministry of Health, the National Sports Council, the Women and Sports Association, Ladies Circle and the Cancer Concern Association hosted a press conference yesterday morning with all media houses to give details of the upcoming activities to mark cancer month.

The conference was headed by Chantal Ghislain, chairperson of the Women’s Caucus and her vice-chairperson, Regina Esparon, Patricia Francourt and Gina Laporte who represented the Cancer Concern Association, Delta Ward Horner from the Seychelles Women in Sports Association, Dorothy Isidore from the National Sports Council, Joanna Pouponneau from the Ladies Circle and Sylvie Ah-Time from K-Radio 97.2.

“The activities being organised will give us the chance to explore the issues related to cancer and prevention as well as the effects it has in a community,” said Ms Ghislain.

She added that during this month we will also have the chance to see the resilience of people who have battled or are currently battling the disease and the public will get a chance to hear their testimonies.

“We have used all sorts of tactics to get people talk about cancer including partnering with radio, television, hospitals and all sorts of outlets to sensitise people on early detection,” said the MNA.

“CCA has many objectives that we cannot achieve working as individual, it takes a community. One of our main objectives is to educate the public on the nature of cancer and early detection, we educate people in handling their diagnosis as well as offering counselling and several other services,” said Ms Francourt.

She added that money raised throughout the month will go towards a cancer centre that will be able to offer awareness workshops, training for staff, on site counselling as well as accommodation for people living on other islands who come to Mahé for their chemotherapy.

The Cancer Concern Association will also be celebrating its 20th anniversary since its inception in 1999.

The Seychelles Women in Sports Association will also be taking part in the activities throughout the month. The spokesperson for the association, Mrs Horner, said that one of their main objectives is to get women and girls active in sports and physical activities in order to reduce illnesses such as cancer.

“One of the benefits which we have observed is that you can reduce the risk of cancer by exercising and taking part in physical activities, which also reduce stress and anxiety. Sports also play a big role when treating cancer as there are special exercises designed for people going through treatment,” said Mrs Horner.

In line with this, a sports day will be organised on October 12 at the Freedom Square that will also include a marathon around Victoria. Participants are encouraged to wear pink.

Ms Pouponneau also talked about the Ladies Circle which is an international organisation that empowers women.

“Cancer is something that touches everyone and what we can do is join together as a team to properly sensitise and create the proper platform were we can elevate and properly combat this disease,” said Ms Pouponneau.

Many activities are being organised during the awareness month, one of the very first activity will be the ‘Brave the shave’ which is being organised by Sylvie Ah-Time, K-Radio 97.2 and Cancer Concern Association.

“I have witnessed friends, families and colleagues battling the disease so I wanted to contribute towards a project that goes towards helping people suffering from cancer and raise money towards the cancer centre,” said Ms Ah-Time.

The activity will be held tomorrow in front of the Post Office in Victoria and people are encouraged to come down and shave their head in show of solidarity or get a pink extension braided through their hair for only R50 that will go towards Cancer Concern Association.