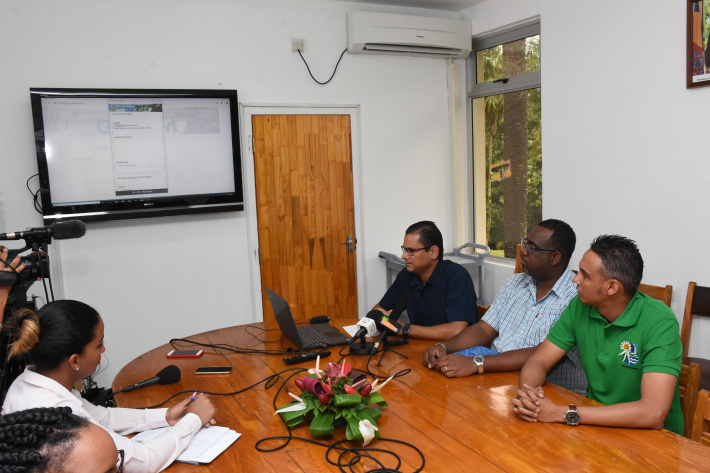 Introducing the ‘Ecoalert’ web app to the media yesterday

Members of the public now have the option to report any environment-related incidents through the web app ‘Ecoalert’ developed by the department of information, communication and technology.

The web app www.ecoalert.gov.sc has already been rolled out by the Ministry of Environment, Energy and Climate Change and is available to persons who want to report any incidents of poaching, illegal dumping, pollution, flooding and lighting of fire.

They can also report on discoveries of strange animals in the environment.

Principal secretary for environment Alain De Commarmond noted that these incidents are already being reported through the Green Line (2722111), Facebook and the ministry’s website, and that the web app is an additional reporting platform.

It is hoped to be used while people are on the move.

Ecoalert is a web app which means that it can be accessed through www.ecoalert.gov.sc on your web browser, whether on your computer, phone or tablet. It is not an app which is available on Google Play Store or the App Store.

Mr De Commarmond explained that they have yet to develop it as an actual app, adding that they may do so if the ministry sees a demand for it.

“It is not an app which we are familiar with, the ones which come with their own little icons on your mobile. If we were to develop an app like that, we would have had to enter into a contractual agreement with someone in the private sector. At this point, we are not going to these heights. We designed it this way together with the department of information, communication and technology (DICT) so that we can refine and amend it as we go along,” explained PS De Commarmond.

The department of environment is also seeking feedback from the public on their experience with the web app in order to assess its practicality and efficiency.

Mr De Commarmond added that the ministry presently interacts actively with the public and stated that environment incidents are reported quite frequently to the ministry.

Krish Gopal, principal analyst at DICT, gave a rundown of Ecoalert and how it functions.

He noted the simplicity of using the app which only needs the person reporting on an incident to upload a photo, video or document of not more than 25 MB and then describe the incident and its location.

The person may choose whether to also add their contact details or to remain anonymous, although Mr De Commarmond stressed that the person will only receive feedback on how the matter was dealt with if they give out their details.

He further added that those who need to report on urgent incidents, a forest fire for instance, should contact the Green Line rather than use Ecoalert since the web app currently does not have instant notification.

The officers of the education department at the ministry who oversee the Greenline, Facebook page and now the Ecoalert, can presently only receive Ecoalerts though their emails.

Terry Mousbé, programme development officer in the education department, noted that officials cannot be everywhere at all times and platforms such as Ecoalert are thus used to fill in that role and has further advised the public to use the web app properly.