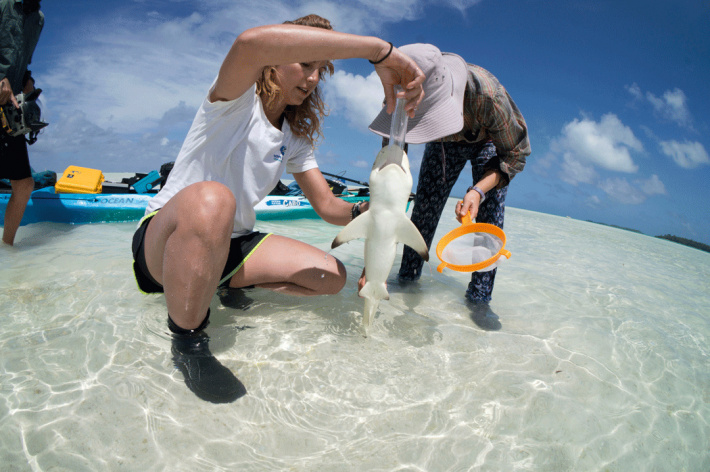 The remoteness and undisturbed ecosystem of St Joseph atoll in Seychelles, might be the secret to success for blacktip reef shark pups in their vulnerable first weeks of life.

That’s according to a new study led by Save our Seas Foundation (SOSF) project leader Ornella Weideli entitled ‘Same species, different prerequisites: investigating body condition and foraging success in young reef sharks between an atoll and an island system’, published on September 17, 2019 in Scientific Reports.

The study shows that blacktip reef sharks born at this atoll start foraging earlier, and did not lose body condition compared to their conspecifics from Moorea, French Polynesia.

These results underscore why marine protected areas (MPAs) might be a suitable tool to protect sharks, because MPAs not only safeguard

shark pups, but also the vital resources they depend on.

“Generally, to successfully protect a species, we need to ensure that the resources (prey species and habitat structures) on which a species depends are also protected,” explained Ms Weideli, the study’s lead author from Switzerland. Ms Weideli is completing her PhD at the Centre de Recherches Insulaires et Observatoire de l’Environnement

(CRIOBE) and EPHE, and worked with several co-authors, including Dr Jodie Rummer from the ARC Centre of Excellence for Coral Reef Studies at James Cook University and Dr Yannis Papastamatiou from Florida International University.

The scientists compared the body condition and foraging success of newborn blacktip reef sharks at two different locations: St Joseph atoll, Seychelles and Moorea, French Polynesia. They measured 546 shark pups, assessing how much they had been eating. The differences among the shark pups between the two locations were surprising.

“Coastal areas have long been considered refuges for young sharks, where prey species are abundant to help support those crucial first weeks and months of life. However, when we looked at the sharks’

stomach contents, we found that only 47% of pups in Moorea had food in their stomachs. While it could be that young blacktip reef sharks might not need to feed that often, we noted considerable declines in the body condition of Moorea’s pups in the weeks that followed their birth. At St Joseph atoll, this decline was not evident, which may be explained by the fact that 85% of the stomachs contained prey.”

Female sharks tended to be larger in Moorea than those in Seychelles, giving birth to bigger pups with greater energy stores. With such a headstart, the researchers expected that these young sharks would

do better than their smaller counterparts in Seychelles. However, the opposite was true: the shark pups of St Joseph atoll were more successful at finding food sooner on their own. In Moorea, shark

pups only started foraging later, and their body condition diminished over time.

The scientists believe that this difference might partly be explained by the environmental condition of the two study sites. St Joseph atoll is remote and uninhabited, a near-pristine atoll in Seychelles that offers sharks some refuge from targeted fishing pressure. Perhaps more importantly, this ecosystem has retained important resources on which

vulnerable shark pups depend: the diverse fishes and coral reef creatures that are suitable prey for growing blacktip youngsters, and the reefs and mangroves that keep nursery systems in balance.

Conversely, while Moorea is a global leader in protecting sharks, the island has experienced severe habitat degradation, with over 95% of its corals affected by recent coral bleaching events.

Ms Weideli, who was based at the Save our Seas Foundation D’Arros Research Centre (SOSF-DRC) for much of her research, has previously identified the importance of St Joseph atoll as a vital habitat for juvenile blacktip reef sharks and sicklefin lemon sharks. These latest findings add to the steady stream of scientific research conducted at the SOSF-DRC, a hub of conservation monitoring and data collection focused on this unique part of the Western Indian Ocean since its inception in 2012.

However, as concern grows over climate change, rising sea surface temperatures may affect newborn shark pups in both Seychelles and French Polynesia. While the current environmental condition of St

“I hope that this study highlights how vital nearshore areas such as St Joseph and Moorea are for young sharks. Our results point to the great

significance of St Joseph atoll for the Republic of Seychelles,” explained Ms Weideli.

“We are happy to see evidence that the healthy condition of the marine environment in Seychelles supports sharks and their survival in their most vulnerable phase of life,” said the founder of the Save our Seas Foundation, Abdulmohsen Abdulmalik Al-Sheik. “It emphasises once again to us at the SOSF just how important this region is for global shark conservation.”

About Save Our Seas Foundation

Founded in Geneva, Switzerland in 2003, the Save Our Seas Foundation (SOSF) is a philanthropic organisation aimed at protecting and caring for the world’s oceans. Its support for research, conservation and education projects worldwide focuses primarily on endangered species of sharks, rays and skates. Three permanent SOSF research and education centres reinforce its action in The Seychelles, South Africa and the USA.

Press release from the Save Our Seas Foundation (SOSF) 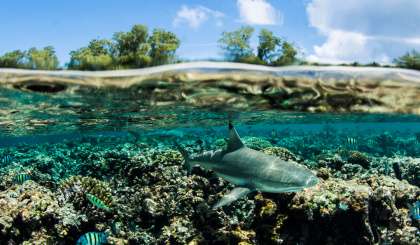 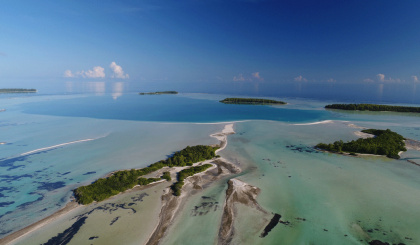