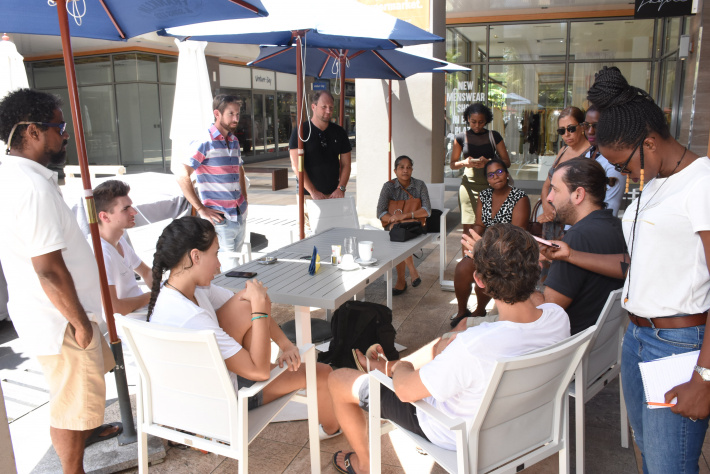 The meeting with the press (Photo: Louis Toussaint)

Partners who are supporting and funding a project to map out the marine biodiversity around Fregate Island using 3D technologies, officially announced the project to members of the local press on Friday at Eden Island.

The two-year project, which started in September, is the first to be funded by the Seychelles Blue Bond.

Wilna Accouche, the general manager of Green Islands Foundation (GIF) which is leading the project, said last year they welcomed Fregate Island Private as a partner in their project to assess the marine biodiversity around the island. The Blue Economy Research Institute (BERI) of the University of Seychelles was also brought in to assist. But Fregate Island already has its own partners passionate in ocean and protection of marine biodiversity namely Coralive, a Swiss-based environmental organisation operating worldwide and Blue Nomads based in the Philippines and specialising in cutting-edge technologies, bathymetry survey & ocean mapping to name a few which also came onboard.

She said the GIF is really excited and looking forward to this great collaboration the main purpose of which is to know what are in the waters around Fregate Island something which is totally unknown right now.

“For islands like Fregate their main interest is tourism development and for it to welcome and support such a project to also know what lies around it without any obligation is really commendable,” Ms Accouche remarked.

She said the project will include conducting a marine assessment of Fregate Island, setting up a long-term monitoring system around the island and lastly there will be an education component whereby data collected will be made available to UniSey environmental science students and for other research purposes.

Angelique Pouponneau, the chief executive of SeyCCAT the trust fund which is the initial funder of the project, said it has attracted and brought together a remarkable number of partners and donors.

“SeyCCAT is very happy and proud as it is one of the first projects being supported and funded by the Seychelles’ Blue Bond,” Ms Pouponneau noted.

“It is the first time that high level technologies will be used to undertake mapping of the sea floor of that area and we are really excited,” added Ms Pouponneau.

Ahmad Allahgholi, the founder and director of Coralive, explained that the mapping will comprise a bathymetry scan to have a basic understanding of how the ocean floor around the island looks like, ultra high resolution digital images of what has been scanned will be produced and these images would be analysed using sophisticated technological systems.

“It is really a very easy and fast way to use technology and data to protect nature,” Mr Allahgholi pointed out.

It is also expected that the outcome of such a project would advance better management of the waters around the island, enhance public awareness, and contribute to the 2020 vision contained in the Seychelles’ Sustainable Development Strategy.