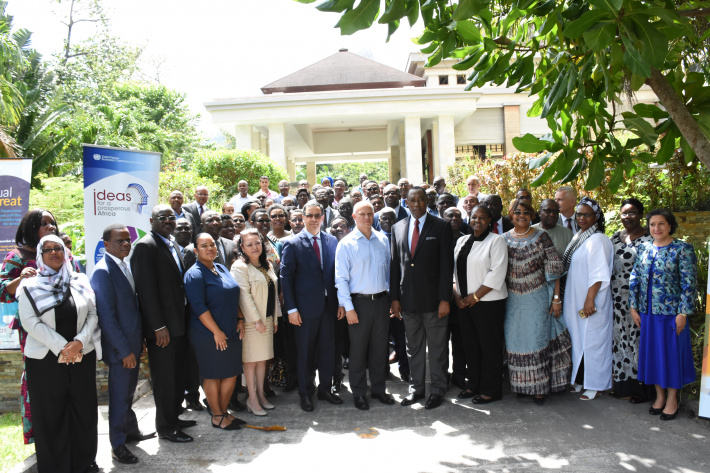 Delegates in a souvenir photograph after the official opening of the meeting (Photo: Joena Meme)

Ambassadors and representatives of the 54 African states congregated at the Savoy Seychelles Resort & Spa yesterday for the opening day of the Annual Retreat of the African Permanent Representatives and the United Nations (UN)) Economic Commission for Africa (ECA), as part of the Commission’s efforts towards strengthening the opening dialogue with member states on key development priorities that will lead to accelerated development results in Africa.

The two-day retreat, which comes to an end today, seeks to provide a platform for better information sharing and enhanced awareness of and support to ECA’s activities, foster better collaboration in promoting consensus on Africa’s policy responses with key stakeholders and facilitate greater dissemination of the Commission knowledge and policy products in member states.

This year’s retreat involves deliberations on major themes and global trends that are creating new opportunities and reshaping Africa’s engagement with the rest of the world, including Africa’s responses to climate change challenges, the next phase on the implementation of the African Continental Free Trade Area and accelerated actions to deliver the Sustainable Development Goals (SDGs) by 2030.

During the opening ceremony yesterday morning, Minister for Health Jean-Paul Adam delivered the keynote speech on behalf of the government of Seychelles, in which he spoke of the implications and effects of climate change on small island states, on account of their isolated locations and minimal land area.

Minister Adam went on to elaborate on the possibilities towards an African development path that has sustainability at the centre of its industrialisation, commending ECA for their efforts towards supporting investment in cleaner energy as well as other climate-friendly initiatives.

Following the opening session, an interactive dialogue session was held whereby participants were given the opportunity to discuss with the commission the activities, outcomes, successes and learnings of the commission over the past year.

Accelerating efforts on climate change challenges and the emerging global and continental priorities for the commission were also addressed during the afternoon.

According to director of the African Centre for statistics at the ECA Oliver Chinganya, the annual retreat serves to highlight the areas in which the ECA can better respond to the needs of individual countries and to help the commission reshape or refocus in terms of what to do during the upcoming year.

“One of the main things that we are going to be discussing here, first of all is what are the developmental issues on the continent? One of them is the issue of climate change which has hit parts of Africa and the people of Southern Africa, but also on the Eastern side. How can we come up with strategic policies and arrangements that will be able to create the sustainability and help to support the economies of our country,” Mr Chinganya said.

During today’s session, the African Permanent Representatives will discuss the way forward on actions that will serve to strengthen the engagement of the representatives themselves and the ECA secretariat. The programme also involves a visit to Anse à la Mouche whereby participants will visit the coastal management zone and have the opportunity to discuss risks associated with climate change and the practical measures that accelerate climate actions that promote resilience and adaptation to climate change challenges.

“The main outcome is an understanding of what kind of mechanism or strategy we need to put in place around climate resilience. What kind of sustainable policies should we be coming up with to help countries to develop policies that are not just being put on the shelves but they are included in their national development plans. The only way to prioritise it is to make sure it is in the national development plans so that is the thinking, that at the end of the day, we will have a clear diagram in terms of where we want to go into states with regards to climate change and the blue economy,” concluded Mr Chinganya.