ACP Business Summit: Presidential Dialogue on the implementation of investment plans and concrete projects to promote industrialisation in the ACP regions. |10 December 2019

President Danny Faure took part in a Presidential Dialogue at the ACP Business Summit being held in Nairobi, Kenya on December 8, 2019 on the implementation of investment plans and concrete projects to promote industrialisation in the African, Caribbean and Pacific (ACP) regions.

The forum, which was attended mainly by business representatives from across the ACP, was addressed by the ACP secretary general Dr Patrick Gomes and opened and presided by President Uhuru Kenyatta of Kenya.

Focusing his interventions on investment in the blue economy, President Faure highlighted Seychelles’ achievements in securing innovative financing in the blue economy sector including the USD 15 million Blue Bonds Proceeds and the USD 800,000 grant under the African Development Bank Fund for Africa Private Sector Assistance.

In response to panel questions on climate change response and preparation, President Faure noted that most ACP countries are unprepared for the devastating effects of climate change.

He emphasised the need for high carbon-emitting countries to assume greater responsibility in putting in place climate adaptation mechanisms and financial resources for access by the most vulnerable countries.

He further shared his hopes that by this time next year, the three regions of the ACP would have a blue economy comprehensive plan.

Among the other lead speakers on the panel included Mia Amor Mottley, Prime Minister of the Commonwealth of Barbados, who addressed the need for ACP countries to “know each other” as opposed to “knowing about each other” in order to promote South-South cooperation, trade and investment.

Other panellists reiterated the need to create a more enabling business environment for private sector development and investment with particular focus on digitalisation and infrastructure development.

Earlier in the day, President Faure was taken on a guided tour of the ACP Village set up in the margins of the ACP Business Summit. The ACP Village showcased the various products, programmes and services available in a number of ACP countries. 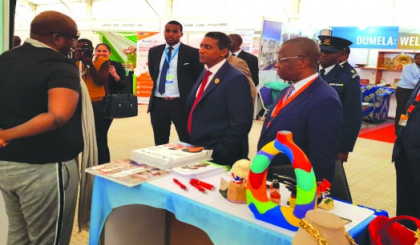