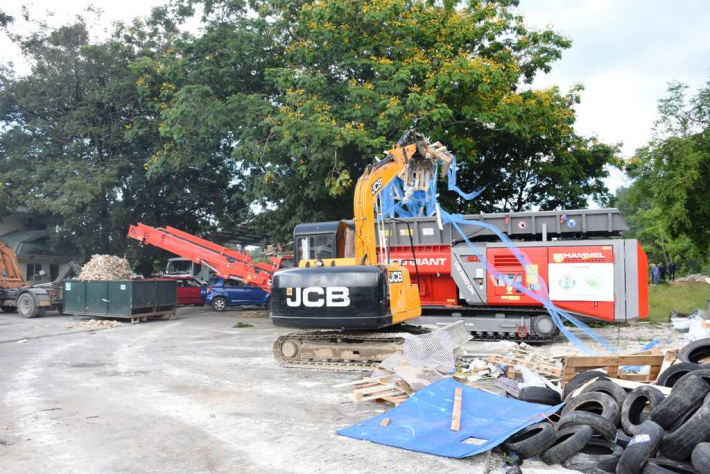 Seychelles gets first waste shredder The Red Giant ‘Zerkleinerer’ waste shredder, a first for Seychelles, was officially handed over to the Landscape and Waste Management Agency (LWMA) on Friday.

The Red Giant ‘Zerkleinerer’ waste shredder, a first for Seychelles, was officially handed over to the Landscape and Waste Management Agency (LWMA) on Friday.

It was manufactured and brought in from Germany by ‘HAMMEL’, a company which specialises in innovative waste and recycling technologies, for about R9 million.

The shredder was acquired partly from a R3 million grant from the Environment Trust Fund and the remaining R6 million from the government.

According to LWMA’s chief executive, Flavien Joubert, the machine had to be shipped in three parts and re-assembled in Seychelles by a team of technicians from the company.

Once assembled, the Red Giant is said to weigh around 43 tonnes.

As demonstrated in a small ceremony on Friday, the Red Giant can shred a number of bulky waste including cars, large tree trunks and timber, tyres, metals as well as appliances such as washing machines and refrigerators.

Mr Joubert stated that the shredder will help a lot in the reduction of waste volume on the landfill as well as the recovery of materials, such as scrap metal, for local use or for export.

“Just along its conveyor belt, the machine also has a magnetic separator which removes any metal scraps, which can be used by any person or business interested in processing metal scraps,” he explained.

“This means that we will be able to recover metal which could go for export and the rest we can just put it in the landfill, which is much easier. Once processed in the shredder the metals are easier to handle.”

But the ultimate objective behind the acquisition of the shredder remains the reduction in the amount of waste that goes on the landfill.

“It will help the country better manage waste and even stop certain waste from entering the landfill,” Mr Joubert added.

Environment Trust Fund (ETF) chairperson, Denis Matatiken, explained that the ETF board approved to part-finance this project because it strongly felt that a landfill zone which has a huge amount of waste and is not managed well is not good for the environment.

He noted that ETF would hope to one day finance a large waste compacter, which would complement the shredder.