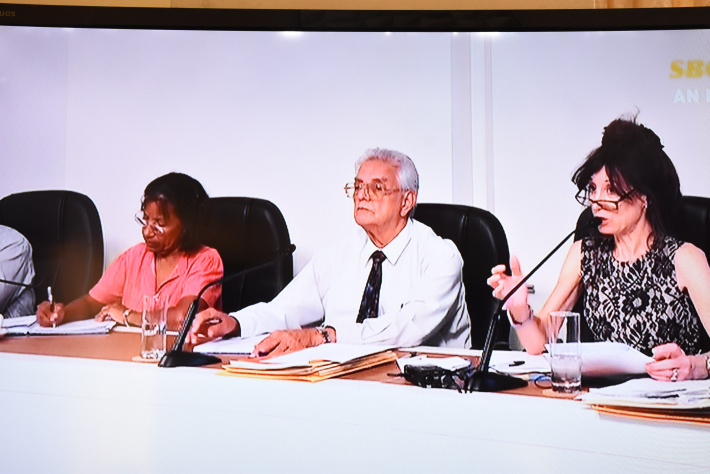 The chairperson of the Truth, Reconciliation and National Unity Commission (TRNUC), Gabrielle McIntyre, has reiterated the commission’s full adherence to international human rights norms and appropriate fair trial standards while calling on the public in general to respect its work and the persons appearing before the commission.

Mrs McIntyre made the announcement yesterday morning during the commission’s first hearing session for 2020 at its premises at Josephine Cafrine Building at Ile Perseverance.

“The commission, through its investigations and determinations of complaints of allegations of human rights violations related to the Coup D’état of 1977, is to determine the truth of those allegations, create an objective public record of those violations, help bridge divisions caused by any violations, provide closure for the victims and perpetrators of the violations, determine the appropriate reparations for victims, the appropriate rehabilitation for victims and perpetrators, and whether or not to grant amnesty to persons the commission determines responsible for human rights violations.

“Ultimately, through its work, the commission's objective is to unite the people of Seychelles around a common agenda that will help them move forward in confidence and with a sense of common purpose and ensure that such violations do not recur.

“In everything it does, the Commission is to adhere fully to international human rights norms and appropriate international fair trial standards and demonstrate respect for the right to dignity of suspects, perpetrators, victims and witnesses. The Commission is required to carry out its functions in an open, impartial and transparent manner and to be accountable for its actions.

“Finally, the Commission wishes to remind all persons coming before it of the prohibition of making allegations against a person who has not previously been given the opportunity to respond to that allegation. The making of an allegation without previously giving the person impugned the right to respond violates the due process rights of that person. Moreover, the Commission stresses again that witnesses should only give evidence to the Commission of that which they reasonably know to be true and should refrain from making unfounded allegations, particularly when they are irrelevant to the determination of the complaint made. The making of unfounded and irrelevant allegations hinders the work of the Commission and undermines its objective of reconciling the people of Seychelles.”