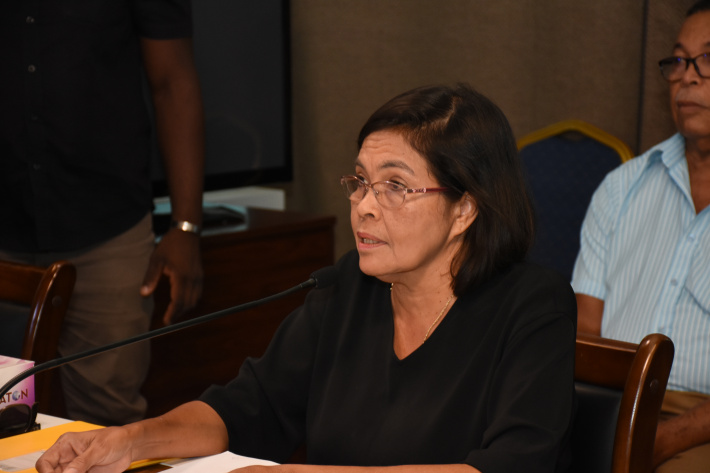 Four complainants give their testimonies

An emotional Sharon Morgan was the first to take the stand to talk about her life without her father, Gilbert Morgan, who disappeared on February 7, 1977.

According to the 46-year-old, she was only three and a half years old when her 30-year-old father at that time disappeared after he had gone to the Reef Hotel for a drink.

She said that losing her father had left an empty hole in her life and that of the rest of her family as life would have been different with him around.

Ms Morgan blamed former President France Albert Rene for giving the orders for the disappearance of her father for his own benefit.

“A father to me means protection, support, guidance, structure, he’d be there for me through good and bad times, hold me in his arms and tell me everything will be ok, protect me from this dark world, believe in me when no-one would, teach me how to drive, be proud of me when I tell him I bought my first car, be on my side no matter what, walk me down the aisle on my wedding day, but none of that happened,” she said, noting that former President Rene had stolen her childhood and had violated her right as a human being all through power greed.

Ms Morgan said that through the action of former President Rene, she had lost educational and social benefits but he was able to hand all that to his kids. She further said that until today she has lived with a lot of hatred, resentment and weary of her surrounding on thinking what happened to her father.

She said that she had lived the past 43 years hoping to see her father one day and would have liked to see former President Rene pay for what he had done to him.

Ms Morgan had disgraceful words to the person she said killed her father and was probably out there watching and listening to the session. She asked him if he had any remorse for what he did to come forward, accept what he did and seek forgiveness as she also wants to see the remains of her father, thus bringing closure to the event.

“If you come forward and accept what you did, what you were ordered to do by Albert, to take my father’s life away, in other words to kill him, with all the anger in me, I can find forgiveness. You can help me move forward and maybe you can have a clear conscience too. We can both finally let my father’s soul rest in peace,” she said.

Ms Morgan stressed on the responsibility of former President Rene and the state to pay for compensation for the many losses she endured in her life especially that of her father. She noted that while she was in Victoria on December 23, 2019, she learned from a witness source that their family home his father built at upper Pointe Laure was deliberately set on fire by two of former President Rene’s henchmen. She stated that the witness had told her that she can identify the two persons as she had questioned them upon seeing them with kerosene canisters that day in the area. She also asked for anybody with other information on the fire incident to come forward.

Ms Morgan solemnly said that she had learned to know that it was former President Rene who was responsible for the death of her father through the pain and suffering of her mother and from the many stories and other actions of human rights violations orchestrated by Mr Rene.

The chairman of the commission, Gabrielle McIntyre, said that the commission, through its investigation, knows the suspect involved in the disappearance of Mr Morgan and he will be receiving a suspect notification today (Thursday) to appear before the commission.

To conclude, Ms Morgan also complained to the commission about the sale under duress of a piece of land at Les Cannelles by her mother to former army chief, Leopold Payet, claiming to build an army camp which never happened but instead a block of apartment and house for his daughter were built on the property.

Ms Morgan, who is on a month holiday in Seychelles with her husband, resides in Canada.

Blaisila Hoffman was before the commission with her complaint in relation to the death of her brother Maxim Hoffman, an island manager with the Islands Development Company (IDC), who died on August 13, 1985.

Ms Hoffman had claimed to the commission that he was poisoned rather than what the chief executive Glenny Savy had told the family at that time in his office that he had committed suicide through drinking poison. Mr Hoffman was at that time working on Marie Louise Island.

Ms Hoffman said that Mr Savy had told them on visiting the island after the incident and he did not see any sign of disruptions but had noticed that Mr Hoffman had used the toilet. She further said that Mr Savy had said that her brother had already audited the account to be handed over but only two beer crates were missing.

She added that to her surprise, no police investigation was held into his brother’s death which was considered as a suicide, and was told by police inspector James Savy that the case was closed. She said she did not believe her brother had committed suicide further to a statement of pathologist Dr Brewer, who did the post mortem and found under a litre of poison inside the stomach and noted ‘This case needs investigation’.

Ms Hoffman stated that her brother had sometime before his death alerted the family that he was having some trouble with the management and noted that him preparing the audited account to be handed over is proof that he had wanted to leave the island as he had been advised by members of the family.

She noted that after the funeral there were a lot of rumors with some saying that he was an alcoholic, he had been beaten, he had been threatened with death etc. and even got the name of the person who allegedly poisoned her brother.

Ms Hoffman said that she did not want to accuse anybody based on rumours but would like to know how come it was declared a suicide by IDC before a police investigation was held, how did they know that he had drunk poison even before the post mortem was held and why did the police did not investigate the case and also how come somebody who wanted to commit suicide, drank that much poison.

She also said she is not sure if the police went on the island to make an investigation. She noted that the big mistake the family made was not verifying in detail the whole body but said that with regard to his face, there were no visible markings.

Ms Hoffman said that the family did not have the opportunity to know or speak to other people working on the island with her brother and she launched an appeal to anybody that was with him on the island during the period of August 5-August 13, 1985 or others who might know something, to come forward and tell what they know.

Ms Hoffman said that the family wants the case of his outspoken brother to re-open and be investigated.

In his complaint, Luc Changko, who was a very senior meteorological aviation forecaster, said that he was victimised by having his work contract terminated in mid-October in 1999 because of his affiliation with the opposition.

He further said that his constitutional rights as a Seychellois were violated by the state in terms of fundamental human rights and loss of dignity.

“I was punished for just being a candidate for the United Oposition Party in the 1998 election,” he said, noting that the victimisation by the state continued on the international level when he tried to affiliate himself with overseas environmental organisations upon emigrating to Mauritius.

He noted that upon being terminated, he was given only 7% interest gratuity instead of the original 15% and as the only bread winner with loans, life turned difficult for him and his family.

Mr Changko said that he doesn’t consider his case a serious crime, the party in power and the people affiliated with it and who have amassed great amount of wealth at the expense of other Seychellois people, should be held liable to pay compensation to people affected while also face justice. He noted though he doesn’t like the word ‘amnesty’, those who confess their crimes can be pardoned.

After giving an overview of his curriculum vitae in yesterday’s session, complainant Douglas Green, a past teacher, said he was unlawfully sacked from the Ministry of Education on October 21, 1986, in the public interest, for no reason at all.

Mr Green stated that the termination though had taken effect on October 16, 1986. He said he tried to see the then Minister for Education, James Michel, to appeal against his termination but he refused to see him. He noted that until today he still doesn’t have a clue as to what it means to be sacked “in the public interest”. He said that though he was working with the ministry, the termination letter came from the President’s office.

He further said that from then on, he had to live with all sorts of rumours and talk on his sacking with some people saying that he had stolen from the ministry.

He said that he tried to apply for jobs after that but was never successful and from then he had worked as a fisherman until today. He noted that he was even refused planning permission for liquor production and to add on, he doesn’t even know if he will be able to reconcile with the persons who ruined his life given the fact that even today, the ministry has not even responded to a request for his personal file he applied for in 2019.

For this hearing, the vice-chairperson of the commission, Michael Green, being the brother, had to withdraw himself from the hearing. 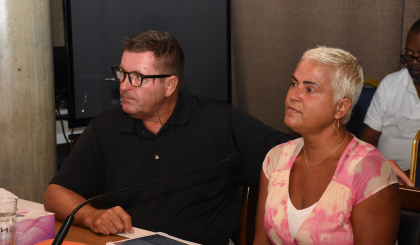 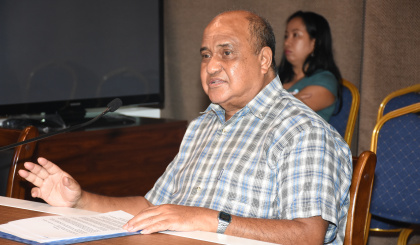 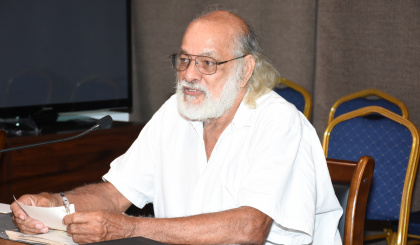