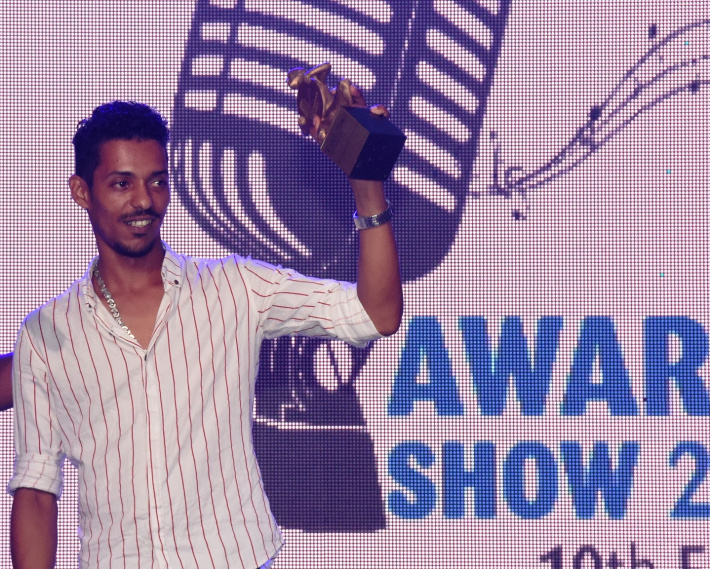 The man behind the camera: Salim Ally

Behind every artist is a tribe comprising equally talented and skilled individuals who each have an instrumental role to play in making the artist, and in some cases arguably, contribute towards the successes of the artist. Often times, these roles and persons are overlooked as not much thought goes into what is behind the scenes or who exactly is behind the scenes.

This week, Entertainment NATION brings you an exclusive interview with the first person to ever be awarded Best Music Video Producer, Salim Ally, who clinched the hotly-anticipated award at the 10th Cable Tunes Awards, held on January 11.

While his name is well-known among local social media users on which he uploads videos produced by himself and his team Orizinal Productions, many don’t know the face behind the camera.

A 28-year-old resident of Anse Royale, Salim Ally initially developed an interest in videography in 2014, where along with four friends and one laptop, they would sit under a kiosk and try to master the editing software and make short videos. From his recollection, at the time, he would watch video tutorials and a short video montage took at least one month to produce, but soon after, within the same year, he landed his first big job producing a documentary and photographs with the United Nations Development Programme (UNDP).

Following the project with UNDP, he managed to secure other opportunities with the Ministry of Environment, Energy and Climate Change (MEECC) who sought his services also for a documentary as well as the GEF Small Grants Programme. At the time, one of the short documentaries produced by Ally, entitled ‘Climate Change’ was entered into an international competition and Seychelles came out 20th out of over 200 countries.

Despite earning his first jobs for documentaries, Ally’s passion and target was always to produce music videos. To date, he has produced music videos for Sandra, Richie B, Bnks and Pusso among others.

“Music videos are something I do with heart although it is a tough challenge. It came just as a hobby as it is something I like. When filming, it is important to understand cinematography in order to depict what you want it to depict. It is tough but fun at the same time. You also need to have patience and sometimes you want to give up but your heart keeps pushing on.  It motivates me knowing that my work will be seen by many people the world over. In fact, I have shot videos for some international artists who have visited our beautiful islands and want to produce a video here”.

“A video is not like a photo. I prefer videos to photography as you can portray more to the audience. Some artists have hit songs but no music video to accompany it and while people know the song, they don’t know who the artist is, a video gives them that exposure,” he stated.

A music video can take up to three weeks for the end product to be completed, depending on the complexity of the piece. The filming process which precedes editing and the montage takes a minimum of one day for straightforward videos while others can take up to one week.

Reminiscing and laughing at the experience, Salim recalls one of his biggest challenges so far, producing eight videos in just under a month (usually he produces three a month), in time for Gunz’s show and album launch ‘Fer li Ankor’.

Portraying the natural beauty of the Seychelles islands is a central theme in Salim’s work, who hopes to have footage of every corner of the paradise islands. Such footage is highly-sought out by international companies and individuals who purchase through online platforms.

“Some big productions are made in Seychelles but our own people are not even aware of it. That means our country has some beautiful scenes so I like to highlight and expose this natural beauty. Seychelles is already one of the best and most scenic locations in the world, with its beautiful landscapes so we might as well make use of what surrounds us and showcase it. Ultimately, I would like to shoot every corner of Seychelles,” he added beaming with pride.

While he enjoys working on music videos, Salim is also keen on short movies and mini-series, the focal point for his team this year.

“Someone who has inspired me and pushed me to focus on creole movies is Albert Duncan. He really encouraged me to focus on producing mini-films and saw potential in me. This year actually, my team and I, Orizinal Productions comprising video producer Mikkie D and Travis Delorie, better known by his stage name T-Trey, are working on mini films and mini-series of a high-quality, although when they will be released exactly is a surprise. We want to do something out of the box,” said Ally.

“It is a known fact that many of us Seychellois enjoy watching telenovelas even to the point that they get completely absorbed in it. Everyone has a story and there are stories all over Seychelles so we can make use of these stories and put them together to create a story that is appealing to the largest audience possible,” a timid Ally announced excitedly.

Keeping the expected release date firmly under wraps, Salim noted that fans can expect at least one episode to be released in the foreseeable future, and to expect calls for auditions for interested actors and actresses soon. The team also intend to create a mobile application by which the audience can catch up with the latest or favourite episodes of the series.

Salim has previously worked on short creole movies including ‘Souvenir’ and ‘Lanmour Pir’ with Orizinal Kreol, earning him quite the fanbase, although many do not know the face behind the name, which is by now a brand. However, more and more, young people are showing greater interest in such art forms and are keen to learn from one of the best.

“There is a lot of interest among the youth to learn the tricks of the trade. In fact, a young lad approached me recently and told me to contact him whenever I am going filming as he wants to be there and learn how to do it. There is also a parent who wants to remove their child from some negative influences and requested that he do attachment with me. It is difficult to find persons to teach such skills to the younger ones and I always think back to when I started off myself so it is only fair that I give them a chance,” explained Ally.

“They might even have some good ideas from which I can learn as well. I’d like to see more youths not just behind the camera but just developing their talents. For instance, one can be good at devising stories. The youth of today are not as proactive as it should be. I personally think everyone in Seychelles should have a camera as we are surrounded by some extraordinary beauty,” he added.

Salim is confident that this year will be a creative one for him and his team with all the exciting projects they have planned.

With regards to his recent recognition at the Cable Tunes Awards, Ally says the award was somewhat unexpected especially considering the other nominees.

“Usually the artist wins the award for best video clip for something that was ultimately produced by you but honestly, the award is very encouraging and motivates me to work harder, do better and create more.”