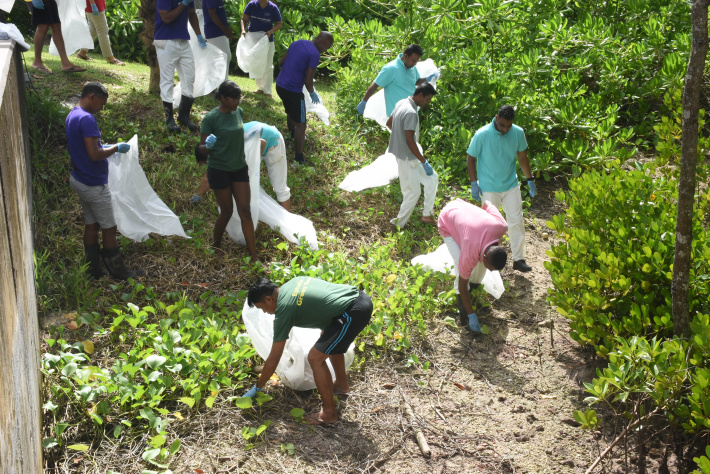 On the occasion of World Wetlands Day, observed annually on February 2, employees of Constance Ephelia Resort Seychelles made a special effort on Monday to clean up the surrounding Port Launay Wetlands area, the biggest mangrove site in the Indian Ocean and the first site in Seychelles to be designated as a Wetland of International importance, under the Ramsar Convention.

The Port Launay Wetlands cover an area of 120.6 hectares on the western coast of Mahé, and are one of the highest-diversity mangrove areas in the Seychelles, having all the seven species of mangroves, namely, Rhizophora mucronata, Bruiguiera gymnorhgiza, Sonneratia alba, Avicennia marina, Lumnitzera racemosa, Xylocarpus granutum, Ceriops tagal. The site is also ideal for foraging for the Seychelles Sheath Tailed Bats (Coleura seychellensis), a critically endangered bat that is endemic to the Seychelles.

Starting at 3pm, employees of various departments gathered at the entrance bridge to witness the reinstallation of the Ramsar sign, a replacement of the old one which was vandalised weeks ago, before taking to the mangroves to pick up rubbish and litter thrown by passers-by as well as debris carried by waves and washed down by the rivers.

Health and safety and environment manager Marcus Ultsch-Unrath, who has been leading the hotel’s environment and conservation efforts over the past six years, explained to the employees the importance of wetland areas and their contribution towards the eco-system.

“This site is really special. Firstly, because there are seven types of mangroves in Seychelles and all seven can be found here. It was the first RAMSAR site in Seychelles in 2004, before Mare Aux Cochons and Aldabra. You don’t find big areas of mangroves like this and it is usually in patches, except for maybe on Curieuse island,” he noted.

“Mangroves are really important as they act as a buffer zone between the land and the sea and play a vital role towards mitigating coastal erosion. We are already witnessing around us in places like Anse Boileau, Anse à la Mouche and North East Point, we are facing coastal erosion and measures are being taken but mangroves act as a protector which is why we don’t have much coastal erosion in this area,” Mr Ultsch-Unrath noted.

He went on to note that mangroves are a rich habitat and act as a fish nursery and urged members of the public to be more conscious of their surroundings and especially the beautiful environment that Seychelles has been blessed with.

“It is thought that over 60 percent of commercial reef fish spend their juvenile days in the mangroves. Other species including crabs, snakes, mudskippers and sea birds also inhabit the area,” he pointed out.

“Another aspect is the filtration aspect. Located between the river and the sea, if there is heavy rainfall or litter washing down, the roots of the mangroves purify the water and only clean water ends up into the sea. This applies even to the sediments, with heavy rain there tends to be more soil in the water flowing down from the river and if this flows directly into the sea, there is a possibility that the sediment covers the corals and causes them to die. The mangrove serves as a natural purification system,” he added.

Over the years, the hotel has organised many such activities in collaboration with other organisations and non-governmental organisations (NGOs) who contribute towards wetlands management and conservation. Clean-ups are also organised once a month in the mangrove area (which spans around 30 hectares of the total area designated under the RAMSAR convention) but according to Mr Ultsch-Unrath, he is still shocked by the amount of rubbish collected each month. A clean-up organised two-three months ago yielded a whopping one tonne of rubbish.

Hotel manager Hiru Daryanani said sustainability is an important consideration for the company and that it will continue with its efforts to educate the surrounding community and protect the environment.

“Every Friday we have a mangrove tour to educate our guests so they can experience one of the largest mangrove compounds in the Indian Ocean. We are proud of it and take pride in our team members’ involvement in keeping our home clean,” he said.

“Basically before, nobody was getting involved as nobody wanted to get dirty but after Marcus and I worked together, we want to encourage everyone so they understand it is really important. We do our part to educate our team members and our guests but we need the public and community members to also be aware. We are looking into the possibility of installing a net to tarp all the rubbish while also ensuring the fishes and species that make use of the mangrove can still do so, although we are seeking permission from the ministry. We are experts in hospitality and serving food and such things but we do this to the benefit of the environment, community and the future generations,” Mr Daryanani said.

There are three RAMSAR sites in the Seychelles – Morne Seychellois National Park, the Port Launay wetlands and the third is located on Aldabra. 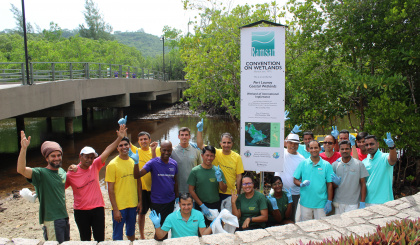