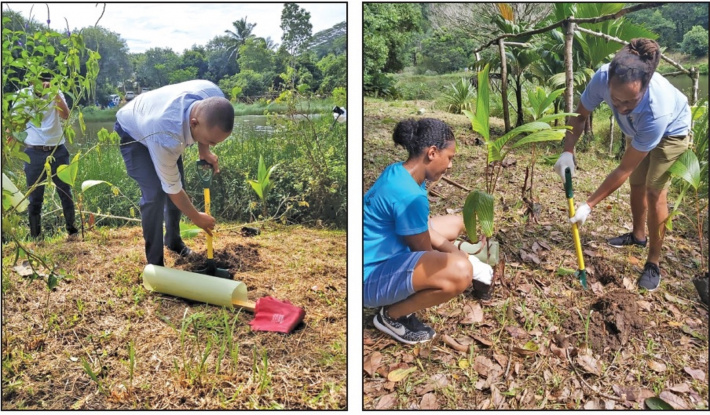 To commemorate the World Wetlands Day which is normally celebrated on February 2, the Ministry of Environment, Energy & Climate Change organised a tree-planting activity at ‘Dan Sours’, Bougainville.

“Now that apart from the 171 member countries to the Ramsar convention, more than 2,386 Ramsar sites of wetlands of international importance have been declared with a total land area of more than 254 million hectares of wetland areas!” Minister Cosgrow remarked in his opening statement.

“Each year, government allocates more than R12 million exclusively for the restoration, cleaning and management of our wetlands and rivers. This shows the government’s emphasis on the importance of our wetlands and the need to restore them and to keep them in a healthy state – which is essential to our future generations,” he added.

Following this, the minister along with staff from the ministry planted some palm trees so as to help in the restoration of this wetland.

Wetlands are areas which encompass moist habitats including lakes, rivers, marshes and ponds. These water bodies provide vast habitation for both aquatic plants and animals. Together with funding from the government of Seychelles various projects are being implemented by the UNDP through the Ecosystem Based Adaptation (EBA), which intensify towards the protection and enhancement of habitat so to improve various issues such as biodiversity increase, flood mitigation and our greatest concern erosion prevention.

The theme for this year’s World Wetland Day is ‘Wetland-Biodiversity matters’.

The accompanying photographs show some highlights of the tree-planting activity.

Text and photos contributed by the Ministry of Environment, Energy & Climate Change