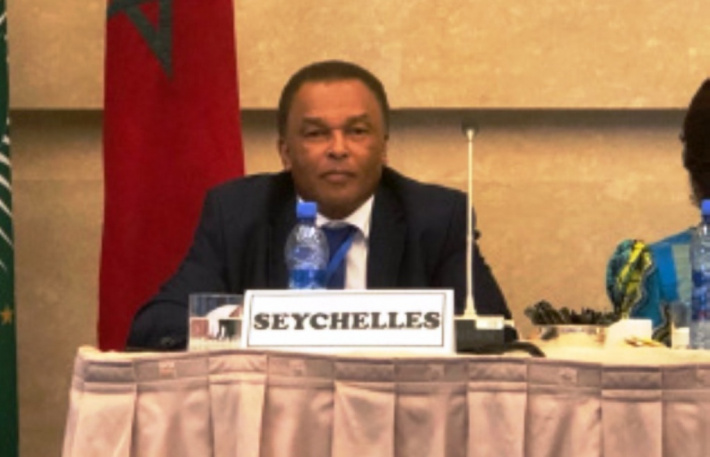 PS Agricole speaking at the side event

“In order to protect the country’s coastline from ongoing erosion, the government of Seychelles has embarked on an ambitious and hide-reaching coastal management plan costing USD15 million,” said the principal secretary for Energy and Climate Change, Wills Agricole.

“The plan sets out a holistic set of priorities for coastal management including monitoring and research, coastal protection infrastructure, risk-based spatial planning and capacity building,” underlined Mr Agricole, who was speaking during a high-level meeting on ‘Climate Change: Adaptation Strategies for improved resilience in Africa’.

During this event, jointly organised by the Kingdom of Morocco, the Republic of Gabon and the Seychelles at the headquarters of the African Union (AU) on the sidelines of the Pan-African organisation Summit, Mr Agricole noted that the Seychelles has also launched many initiatives, with the Blue Economy being an important mechanism for the country to support its sustainable development goals and address climate change adaptation and ocean management effectively.

The objectives of the side event included:

“African ministers of State pledged to accelerate initiatives aimed at strengthening Africa's resilience in the face of the climate emergency,” stressed the Minister Delegate, citing in this sense the African initiative for the adaptation of agriculture (#AAA) and the initiative for security, stability and sustainability (#SSS).

Other speakers and presenters at the event were: Alain-Claude Bilie-By-Nze, Minister for Foreign Affairs, the Republic of Gabon; Mohcine Jazouli, Minister Delegate to the Minister for Foreign Affairs, African Cooperation and Moroccan Expatriate, the Kingdom of Morocco; Josefa Leonel Correia Sacko, Commissioner for Rural Economy and Agriculture of the African Union; Dr Vera Songwe, executive secretary general United Nations Economic Commission for Africa;