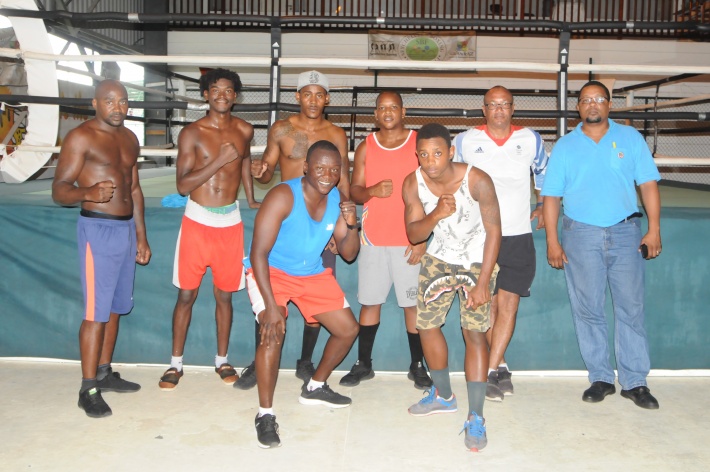 The local boxers before a training session yesterday. Absent are Keddy Agnes and Andrique Allisop

The only way for Team Seychelles to win gold medals at the upcoming 10th Indian Ocean Island Games (IOIG) scheduled for Mauritius from July 19-28 is to have good self-discipline and more commitment, boxing coach Gerry Legras has said.

Coach Legras said, other than their routine training the pugilists need to work more on their own to polish whatever skills and techniques they acquire during training.

Since coming back from the 50th International Tournament ‘GRAND PRIX’ in Usti nad Labem, Prague, in the Czech Republic, the Seychelles boxing team made up of eight boxers have entered a local training camp where they train twice daily at the boxing ground at the NSC Hall at Roche Caïman.

Other than coach Legras, the team also train under coach Rival Payet, while Jack Bonne is the team manager.

The morning sessions focus more on physical conditioning and endurance, together with weights and circuits training, while the after sessions are based on the technical aspects of the sports, including sparring.

Coach Legras noted the 10th IOIG will be a tough and the local boxers need to double their efforts if they want to shine.

He added that according to sources, hosts Mauritius are well prepared and will feature in all weight categories, while having the home crowd advantage.

As for Madagascar, he said they are also well advanced in term of preparations.

“I have not heard anything regarding Reunion, but underestimating any country is out of the question,” he added.

“As coach, I have hope in my athletes, but in the end, it will be up to them to push harder and prove themselves at the Games,” added coach Legras who also said they are expected to attend an international training camp prior to the IOIG.

Meanwhile, Mauritius has regained the service of Kennedy St Pierre who missed the last Games in 2015 after a short spell at professional level.

St Pierre, in 2011, at only 18 years old won two gold medals at continental level, precisely at the African Championships in Yaoundé, Cameroon, and at the All-Africa Games in Maputo, Mozambique.

He then won a silver medal at the XX Commonwealth Games in Glasgow, Scotland in 2014 which gave him a shot at professional boxing, preventing him to compete at the 9th IOIG in 2015 in Reunion.

Now back in action, St Pierre who will compete in the +91kg will surely be one of the obstacles in the way of local hard hitter Keddy Agnes.

Another weapon in the Mauritian arsenal will be Richarno Colin who just won the 64kg gold medal at the Indian Open International Tournament held at the Sarusajai Stadium.

Colin will feature in the same group as Andrique Allisop.