Lakstars are the winners of the Gran Kaz Cup Cricket Tournament 2019 after toppling Vijay Warriors by 11 runs in the final played on June 9 at Stad Popiler.

The final proved to be a closely fought affair as the two teams are equally good.

Lakstars won the toss and elected to bat first. They were bowled out for 117 runs in the last ball of their innings. Lakstars captain Thimeera Madhusanka who led from the front was their top scorer with 56 runs in 39 balls which was his second consecutive fifty in the tournament.

Best bowling performance for Vijay Warriors was by veteran spin bowler Kaushal Patel who took 3 wickets for 13 runs in his quota of 5 overs.

In reply, Vijay Warriors needed 118 runs to win. They were scoring at a good rate and on target but Lakstars’ bowlers kept bowling well and picking up wickets at regular intervals. Vijay Warriors managed to score only 106 runs for the loss of 9 wickets in 25 overs, which resulted in Lakstars team winning the match by 11 runs.

Best bowling figures for Lakstars was by Dilan Asanga who took 4 wickets for 33 runs and Sampath Chameera with 3 wickets for 27 runs in 5 overs. 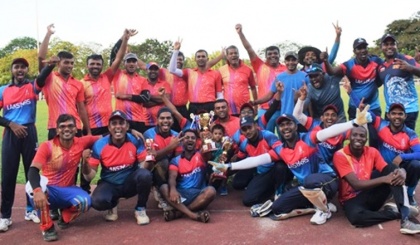