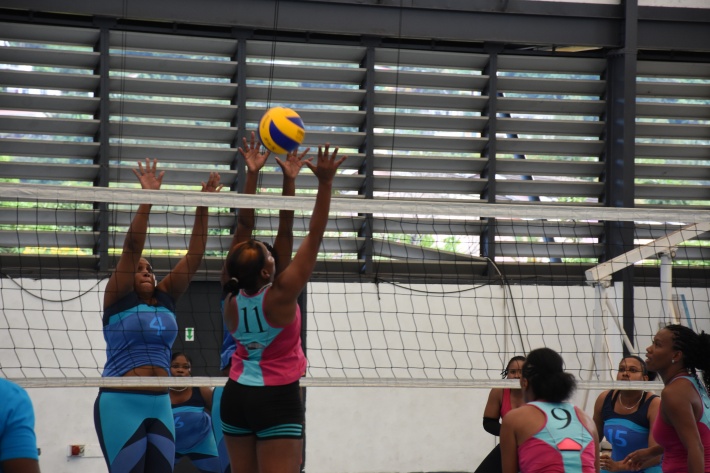 Premium Spikers and Cascade are presently leading the league tables in the men’s and women’s top divisions, while Racing Club and SeyPearl are leading the lower divisions after the first round of match in the national league.

In the men’s division one league, Premium Spikers are leading with 10 points, after three wins and one defeat out of four matches.

They have 11 sets in their favour and four against, while their only loss was against rivals Beau Vallon.

Neo Boyz are occupying the runners-up spot with nine points after also winning three times and losing once in three encounters. Their set record is nine for and three against.

Also with three wins and a loss out of four matches, Beau Vallon are third on seven points with nine sets for and eight against.

Inner island team La Digue are in fourth position with four points after a single victory and three defeats. They have six sets for and nine against.

Ton Neo are carrying the weight of the league table after four defeats in as many matches. They have not collected a single point while conceding 12 sets and winning only one.

In the women’s top league, unbeaten Cascade are leading with 14 points after five wins in as many matches. They have collected 15 sets while losing only four.

City Ladies are second on 11 points after four wins and a loss. They have 13 sets in their favour and six against.

With three wins and two defeats, defending champions Arsu a lying third on nine points with 10 sets in their favour and seven against.

Island Waves, who have registered two wins and three defeats, are presently fourth on eight points with 11 sets for and two against.

With a single victory and four defeats, Mont Fleuri are fifth on the league table with three points. They have won four sets and lost 12.

Newcomers St Michel Sisters are still winless, without any point or set in the division. They are last in the ranking with -15 sets.

In the men’s division two league, unbeaten Racing Club are top with maximum 18 points after six wins in as many matches. They have 18 sets for, compared to only one against them.

Defending champions Outsiders have collected 10 points so far, after winning three matches and losing three out of six outings.

Juniors are fifth on seven points from two wins and three defeats.

In the women’s division two group, SeyPearl are leading the way with maximum 24 points from eight victories in as many matches.

Valley Volleyball Club are second on 17 points after collecting six victories and a defeat in seven matches, while Breakaway, who were demoted from the top division at the end of last season, are currently third on 16 points. They have registered five wins and three losses in eight matches played.

St Francis Sisters are fourth on 14 points from four wins and three losses, ahead of Island Pearl who are fifth on 13 points. They have five wins and a loss after six matches.

The following are the different league tables after the first round of matches. 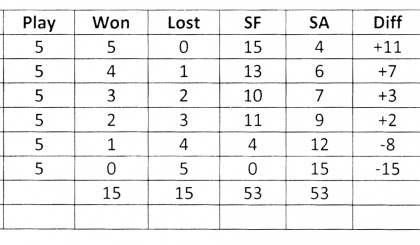 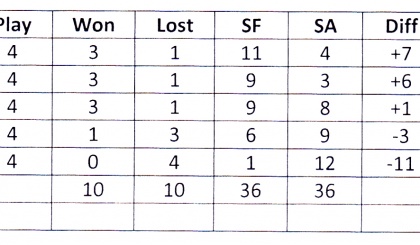 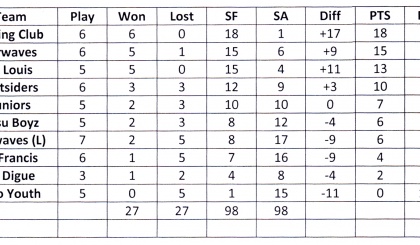 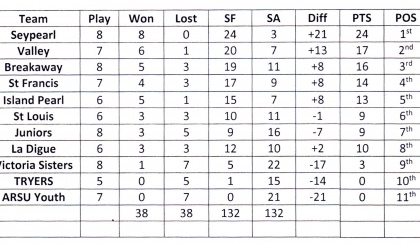