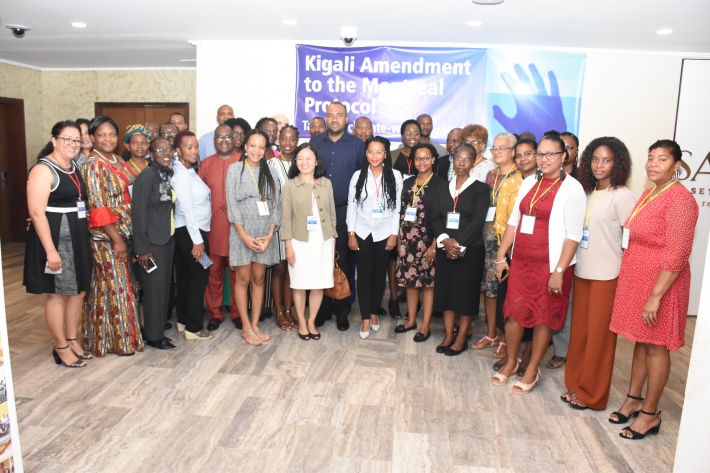 The cabinet of ministers has already endorsed the Kigali Amendment to the Montreal Protocol to phase-down Hydro Fluoro Carbon (HFC) gases, primarily used in air conditioning, refrigeration and foam insulation and it is now before the National Assembly for ratification which is expected to be completed by the end of this month.

The Minister for Environment, Energy and Climate Change Wallace Cosgrow made the declaration on Monday morning while launching a three-day training session for present and new national ozone officers as well as legal persons from SADC English speaking countries taking place here at the Savoy Resort & Spa, Beau Vallon.

So far some 80 countries have ratified the Kigali Amendment.

Under the Kigali Amendment, countries need to ratify the amendment to ensure legal preparedness by adjusting laws and regulations, and adopt energy-efficient and climate-friendly technology that is good for the environment and their industry’s bottom line.

Minister Cosgrow reminded all those taking part in the training that though ozone friendly, HFCs are powerful greenhouse gases that can be thousands of times more potent and more destructive to the climate than carbon dioxide in contributing to climate change and their growing use threatens to undermine the Paris Agreement, agreed by 195 countries in 2015.

Minister Cosgrow went on to highlight Seychelles achievements and initiatives to protect the Ozone Layer ever since it became party to the Montreal Protocol on substances that deplete the Ozone Layer in 1993.

He noted that Seychelles has had many good reasons to celebrate its Montreal Protocol achievements. “Not only did we meet our Montreal Protocol obligations and targets but we were also able to reap benefits in several areas,” Minister Cosgrow emphasised.

During the three days of training which is being led by the coordinator of the United Nations Environment Programme (Unep) Compliance Assistance Programme Regional Network, Patrick Salifu, the delegates including Seychelles will each detail their respective country’s status with regard to ratification of the Kigali Amendment and share information on HFC-related policies and legislation, share best practices and learn from each other’s experience, discuss support for establishing institutional arrangements to carry out activities including consultations with relevant national government authorities responsible for climate change, energy efficiency, environment...

Senior ozone officer Inese Chang-Waye said Seychelles is not going to ban the HFC gas completely but will phase it down by cutting down on its importation and consumption by targeting firstly the domestic sector – encouraging importers to refrain from bringing in appliances that use HFC but rather those that use natural refrigerants.

“To encourage this we will lobby for a tax exemption on all appliances and equipment which use natural refrigerant as this gas is still very expensive on the international market,” Ms Chang-Waye stated.

Ms Chang-Waye further noted that the training session for new as well as those national ozone officers who have been in the job for a long time need more training to do their job in detecting and identifying prohibited gasses and equipment containing them from entering the country and to remain up to date with developments in this area. As for the legal officers it is important for them to know the different legal aspects relating to ratification because once it takes place, legislation need to be put in place to guide the ensuing process.