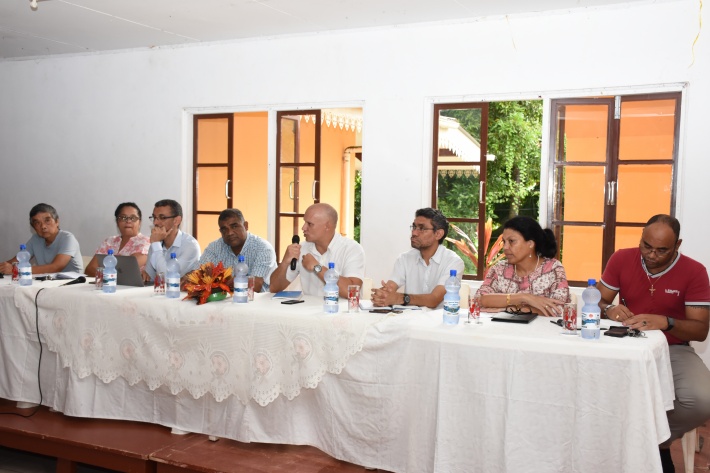 The consultative meeting in progress

The regional council for East Mahé hosted a consultative meeting on Saturday in relation to the development of the regional health centre.

Present to answer the public’s queries on Saturday was the Minister for Health, Jean-Paul Adam, along with a delegation including the chief executive of the Health Care Agency, Dr Danny Louange, and the principal secretary for infrastructure Yves Choppy.

The main issue discussed was whether it would be more feasible and appropriate to construct the new regional centre at Ile Soleil, as had been planned, or at the current Anse Aux Pins clinic, located near the bus station.

Many of the interveners contended that they would much prefer that the centre be constructed at Anse Aux Pins rather than on Ile Soleil, with the main reasons being accessibility and habit.

The MNA (member of National Assembly) for Anse Aux Pins, Clifford Andre, related that he had been approached by his constituents who have expressed concern over the displacement of their health facility to Ile Soleil.

Pamela Dubignon, nurse manager at Anse Aux Pins clinic, added that the majority of her staff have also stated that they would rather see the health centre be built on the exact location.

Minister Adam remarked that it would be extremely difficult to construct a modern health centre, equipped with all the necessary facilities and services, at the current location.

The fact that the Anse Aux Pins plateau is often inundated during bad weather is another reason why the ministry is strongly considering the Ile Soleil development, since the reclaimed land is higher from sea level than the plateau.

Even if the ministry was to undertake the proposal of extending the building onto the old crèche grounds, it would still be inconvenient since the terrain would be difficult to work with.

He however noted that the ministry is looking into the possibility of leaving the Anse Aux Pins clinic as a health outpost where residents could come in to have regular check-ups for ailments such as diabetes and high blood pressure.

This proposal was well received by the MNAs for Cascade and Pointe Larue – Charles De Commarmond and Jude Valmont – who expressed the needs for similar outposts in their districts.

“We want to conduct another consultation before we make our final decision. There is great value in consultations and listen to all views. Our decision will be based on various factors such as money, accessibility to the health centre, busses and other facilities which was thoroughly discussed today,” Minister Adam said.

He noted that the pros and cons of having the health centre at Anse Aux Pins or Ile Soleil should be effectively weighed and considered.

The regional health centre will offer services such as physio, x-rays, ultrasound and other specialist services currently not available at the clinic.

The Ministry of Health wants to finalise the plan for the health centre in the next two months so as to present it into the 2020 budget.

It is expected that SPTC busses will start making trips to Ile Soleil when road constructions are complete and a sewage system is also expected to be constructed for the island. 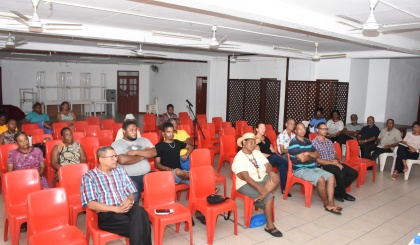