This was presented by the principal secretary for poverty alleviation, Alvin Laurence, chief executive of the National Bureau of Statistics Laura Ah-time, senior policy analyst (PovAD) Ziggy Adam and Maria Payet from NBS on the launch of the document yesterday at the International Conference Centre of Seychelles (ICCS).

The MPI is a multidimensional poverty measure developed by the Oxford Poverty and Human Development Initiative (OPHI) at the University of Oxford. The global MPI, an application of the MPI, was later developed with the United Nations Development Program’s Human Development Report Office. This multidimensional poverty measure provides a more comprehensive picture of poverty. It complements the traditional economic monetary approach, by identifying the different dimensions of poverty in a particular setting. It identifies those who are deprived in several dimensions at the same time, meaning the Joint Distribution of Poverty.

It reveals who is poor and how they are poor, and the average number of deprivations that each poor person experiences, meaning the range of different disadvantages they experience. As well as providing a headline measure of poverty, an MPI can be broken down to reveal the poverty level in different areas of a country and among different sub-groups of people.

“Poverty in Seychelles is traditionally measured by a monetary indicator, using data from household budget surveys. Seychelles has undergone a swift transition from merely looking at poverty from a monetary perspective, to taking up a multidimensional poverty measurement approach. Through this approach, the connection between statistics and measured outcomes are undeniable, evidenced through infinite volumes of readily available documentation. The only consistent challenges to effectively measure and bring about good change from any domain are time and willpower. Time in our context, although universal, is subjective to the demands and expectations of our society but it remains infinite regardless. The efforts of the MPI technical committee comprising members from different sectors of the Seychelles government administration are timeless, but still the need to get business done within a timeframe is a blunt reality supported by the actualities of everyday life in Seychelles. That is, the common belief and conviction that life is getting more difficult, the rich is getting richer and the poor are getting poorer, that the cost of living is constantly rising and that inequality is evident points to the fact that these are an even stronger issue than was the case decades ago,” explained PS Laurence.

He also said that “we will have new orientations on the various policies we will be addressing in terms of review and introduction of new policies. This is a work done by other ministries and it is done through concerted effort.”

National Bureau of Statistics chief executive Laura Ahtime explained that “we undertook this survey to compile an MPI to complement the other measures that were compiled in the past that were based on other monetary measures. This one addresses non-monetary dimensions which include different dimensions of poverty that include the living standards, the education level, employment and health. Basically, we focused on these four dimensions and measuring the different indicators to see how poor the people are and how deep is the level of poverty based on the non-monetary measures. It also helps to prepare the indicators for the sustainable development goals which talk about leaving no one behind. The report provides government with a data set that will help them formulate better policies that would go deeper than just giving out money. We are actually looking at other dimensions that probably need improving in order to improve the lives of the people involved.”

Detailing results of the survey, NBS principal statistician Maria Payet said they did the survey by using a sample of 1,200 households out of 28,000 in Seychelles including Mahé and the inner islands.

“Examining the poverty indices by different sub groups reveal interesting results. It has been found that those living in the largest households, may be more likely to experience multidimensional poverty (with a headcount ratio of 31.15%), than those living in the smallest households. In fact, the relationship between household size and multidimensional poverty is quite clear: poverty rate increases as the household size increases. A breakdown of the poverty indices by age group also shows interesting results. The poverty rate (16.46%) and MPI (0.057) is highest for those in the youth age group. The youth are particularly affected by ‘overcrowding’, ‘substance use/abuse’, ‘school attendance’ and ‘Youth NEET’. With regards to labour force status, the results show that as expected, multidimensional poverty is more prevalent among the unemployed (with a head count ratio of 57.35%), than among those who are employed and those who are outside the labour force.

“The report also examines performance across characteristics of household head. With regards to sex of the head of household, results show that the incidence of multidimensional poverty is higher among female-headed households (with a rate of 12.88%), than male-headed households (with a rate of 10.40%). An obvious gradient can be observed in the head count ratio by education level of head of household: the lower the education level (no schooling) the higher the head count ratio (34.58%). The same pattern can be observed in the MPI, whereby those with no schooling, has the highest MPI (0.115), and the MPI decreases as the education level increases. Poverty indices were also examined at island level. Results show that the main island (Mahé), experiences a higher rate of multidimensional poverty (12.2%), than the inner islands (7.41%). The MPI follows the same pattern, whereby an MPI of 0.041 is observed for Mahé and a lower MPI of 0.022 is observed for the inner islands,” explained Ms Payet.

As the portfolio for poverty reduction rests with the poverty alleviation department, it has the mandate to ensure the continuity of the poverty awareness campaign so that other ministries, departments and agencies (MDAs) are not only well versed with the concept, but that they also learn to integrate the MPI in decision-making. 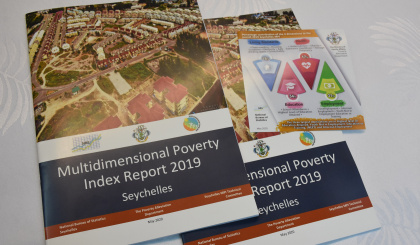 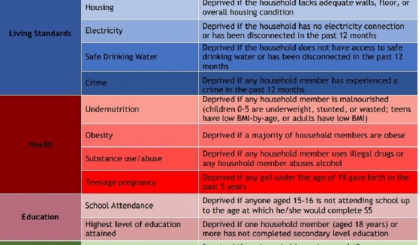 The document is available for viewing on the website of NBS.