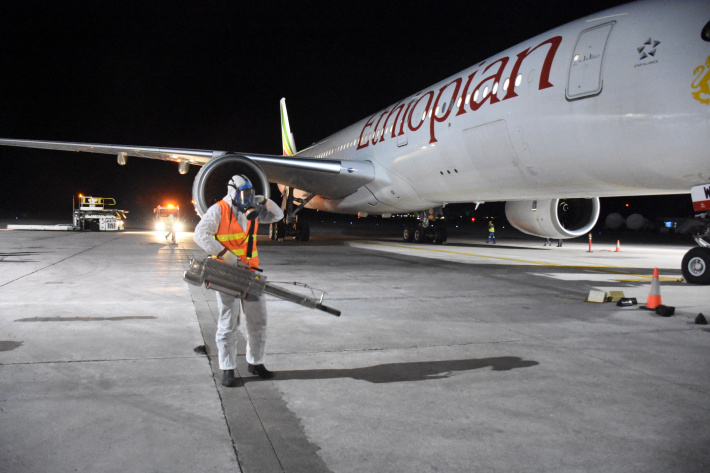 Fogging in progress yesterday evening at the airport after the arrival of the Ethiopian Airways flight (Photo: Jude Morel)

Following an incident at the Seychelles International Airport on Thursday in which an Ethiopian Airlines cargo flight was found to be carrying moths in its cargo haul upon arrival, the National Bio-security Agency (NBA) and the Public Health Authority yesterday fogged the entire airport facility as a precautionary measure against a possible pest infestation.

According to chief plant bio-security officer of NBA, Keven Nancy, the moths were found as soon as the cargo haul of the plane was opened by border control agencies and appropriate action taken to close the haul and fumigate inside, before it was later opened and the cargo unloaded.

Yesterday morning, officers of NBA were able to retrieve eight samples of the moth with the intention of identifying the species. As per preliminary test results, the moth is thought to be the hibiscus leaf caterpillar moth commonly found on the African continent as well as the British Indian Ocean Territories, which means it is probable that it is also found in Seychelles.

“As per the established procedure and our manual, we closed the haul and treated inside and it was opened later. To be more cautious, we made sure to fog the entire airport both inside and out with the help of the department of health,” Mr Nancy said.

“We have contacted Ethiopian Airlines about the incident and they have intensified their treatments before take-off, as we know planes are fumigated before travel, today we have come again to ensure that we take extra precautionary measures,” Mr Nancy stated yesterday at the arrival of yet another Ethiopian Airways cargo flight, which landed at around 6.30pm.

If the insect is found not to be common to Seychelles, certain measures and actions will be taken against the airline, Mr Nancy assured, although analysis and further tests need to be carried out on the samples.

Speaking more generally of the role of NBA and the PHA in relation to aviation-related activities, Mr Nancy noted that such incidents are likely to happen again, as Seychelles is reliant on imports and is a popular travel and tourism destination but that border control agencies are stationed at the airport regularly to inspect cargo and ensure that no pests and diseases make its way into the country.

“Even during this period when there are no commercial flights but only cargo flights, our officers are still present at the airport as cargo includes perishables, such as agricultural cargo being disembarked and making its way to our shelves. During the COVID-19 pandemic, we have increased the number of border control officers at the airport. Usually we have two officers stationed at the arrivals lounge and two for cargo but now as we have more perishables coming in, we have stationed four for cargo to carry out inspections to ensure that there are no pests and diseases entering the country. During this period, we are also placing emphasis on ensuring that documentation is in order but these are routine measures when there are perishables in the cargo.” 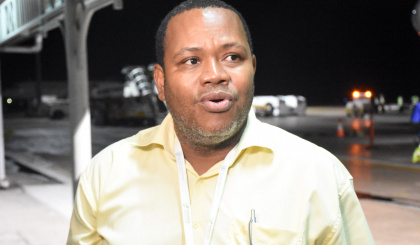 Mr Nancy speaking to the press at the airport (Photo: Jude Morel)