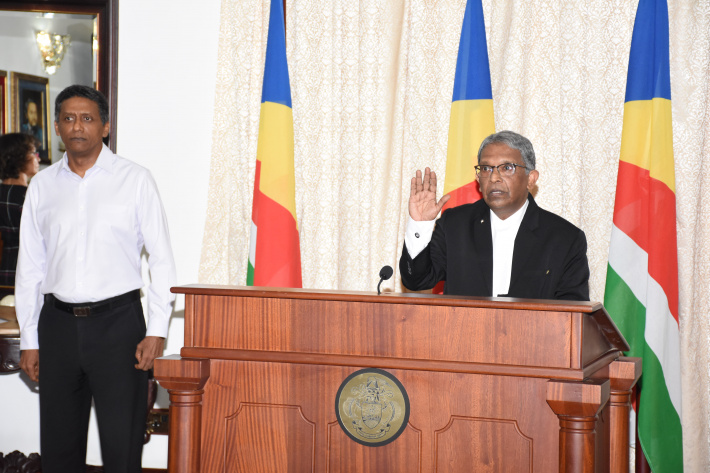 Newly appointed President of the Court of Appeal, Justice Anthony Fernando, yesterday officially took up his post in the highest court of the country during a swearing in ceremony at State House.

Justice Fernando, who has Sri Lankan and Seychellois citizenship, now fills in the post of President of Court of Appeal which remained vacant since end of January 2020 when his predecessor Justice Francis MacGregor retired.

In yesterday’s brief ceremony, Justice Fernando took the oath of allegiance to the Constitution and the judicial oath. This was in the presence of President Danny Faure, Vice-President Vincent Meriton, Speaker of the National Assembly Nicholas Prea, Chief Justice of the Supreme Court Mathilda Twomey, Attorney General Frank Ally, members of the CAA and Justice Fernando’s spouse.

In an interview following his swearing in, Justice Fernando noted that he has been able to balance and serve both the court of appeals for Seychelles and Fiji but this might change due to his present position.

“I have been in the Court of Appeal for the last 10 years and prior to that I was the attorney general for 10 years so I feel that I will be able to do a good job and do my best for all the courts and the country,” he stated.

COVID-19 has delayed the Court of Appeal’s first session of the year, which was set to be held in April, and Justice Fernando expressed his hope for the resumption of the appeal session as soon as possible.

Around 25 appeal cases were expected to be heard in April but were put on hold due to the prohibition of movement order.

The Court of Appeal generally deals with about 50 to 60 cases per year during its three sessions, usually held in April, August and November.

The Court of Appeal is also presently short of two Justices since non-resident Justice of Appeal Lillian Tibatemwa-Ekirikubinza has been unable to travel from Uganda and another Justice of Appeal has yet to be appointed to replace Justice Fernando.

“We only have two Justices of Appeal at the moment,” Justice Fernando clarified.

“I hope that we will be able to have three sessions as soon as things turn to normalcy and I feel that we will first have to complete the April cases[…],” Justice Fernando stated.

Justice Fernando is the second Seychellois after Justice MacGregor to be appointed as the President of the Court of Appeal.