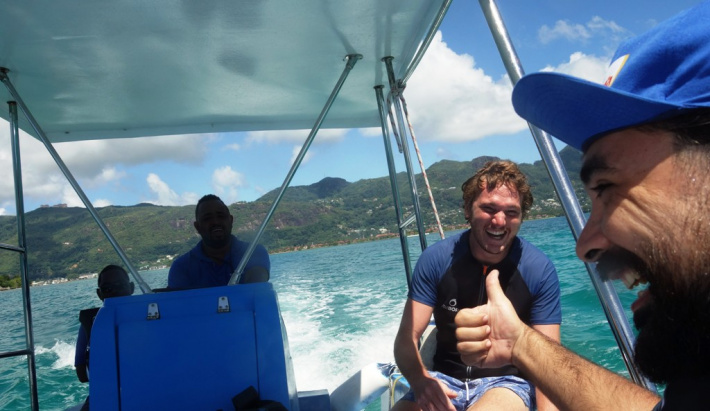 The team ready to work

The concept of ecological solidarity is a major feature of the 2006 law reforming national park policy in France and has its roots in the notions of 1) ecology based on interactions between the habitat and the living organism using it including human, and 2) the solidarity among people with a shared goal and a sense of community who are committed to the common good and well-being of the community. Ecological solidarity can be defined as the interdependence of living beings in the context of spatial and temporal variation in their environment. This theoretical concept is reflected in what has been implemented in the Cerf Island Conservation Programme (CICP), a stewardship programme which has been further enhanced during the COVID-19 crisis in the Sainte Anne Marine Park between two partner organisations: The Marine Conservation Society Seychelles (MCSS) and the Seychelles National Parks Authority (SNPA). The strengthened collaboration and solidarity has permitted employees from both organisations to work together better and share their technical know-how and cultural knowledge of the park, to learn from one another, and to efficiently make use of their different abilities and resources to achieve a shared goal: protect and restore the marine environment and biodiversity in the Ste Anne Marine National Park.

During the COVID-19 situation, SNPA park rangers have remained active and implemented enforcement activities such as search and removal of illegal fish traps and also undertook beach clean-ups with the assistance of MCSS staff.

APO Quatre stated, “We feel privileged to be involved in conducting conservation monitoring with MCSS staff in the Ste Anne Marine Park. We have developed enormous skills in corals monitoring, especially estimating the percentage of coral bleaching on our reefs.”

In addition, SNPA is taking advantage of the reduction of visitors to the park to provide more training to their staff in the field, such as coral reefs monitoring, setting-up and maintenance of coral nurseries, etc. With MCSS having deployed three meso-scale coral nurseries near Cerf Island, rangers got hands-on experience while assisting in the cleaning and maintenance of these nurseries. Moreover, SNPA has helped with the attachment of demarcation buoys indicating the position of the coral nurseries.

“Before COVID-19, diving staff were in the precarious position of having many boats passing close to the nurseries and it has happened that they’ve seen the propellers passing overhead. Thanks to SNPA, we have now deployed demarcation buoys and best practice will need to be implemented, for example all boats must not moor in the area and stand at least 25 metres from the buoys. Moreover, snorkellers must be careful not to touch, grab or kick the coral found on the nurseries,” said Leo Barret, MCSS project leader.

The months of March to May have been extremely hot and the United States’ National Oceanic and Atmospheric Administration (NOAA) have recorded seawater temperatures of up to 33oC in our region, which has ultimately led to a bleaching event. The collaboration between SNPA and MCSS has allowed us to monitor and gather data on reef parameters following the protocol and methodology of CORDIO in the Ste Anne Marine Park.

“Analysis is still ongoing; however, we have observed bleaching in up to 75% of coral. One has to understand that the coral cover of some sites is already really poor, it is thus 75% of the little live coral still there,” said Mr Barret, adding that “the intensity and frequency of coral bleaching is increasing year after year and it would be an error to consider these as separate events without a link between each other. As for the coral in our nurseries, they were chosen wisely and we have observed only 15% bleaching. The team will continue to gather data in 2020 to verify the impact of the bleaching in terms of survival and total mortality on natural sites and coral nurseries.”

The interdependence of local communities, the tourism sector and healthy ecological systems need to be highlighted in the Ste Anne Marine National Park. Such interdependency needs to be a base of thinking on which to build a territory in solidarity with nature.

Contributed by Leo Barret and MCSS team in collaboration with SNPA 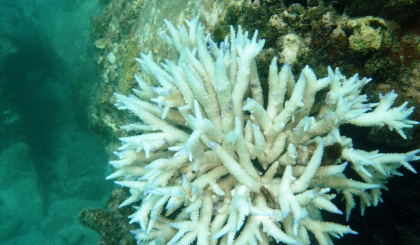 Bleached Acropora in the Ste Anne Marine Park in May 2020 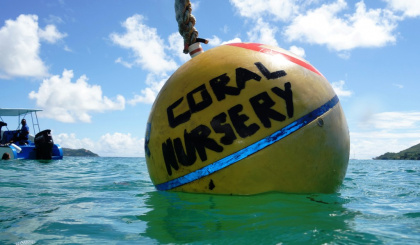