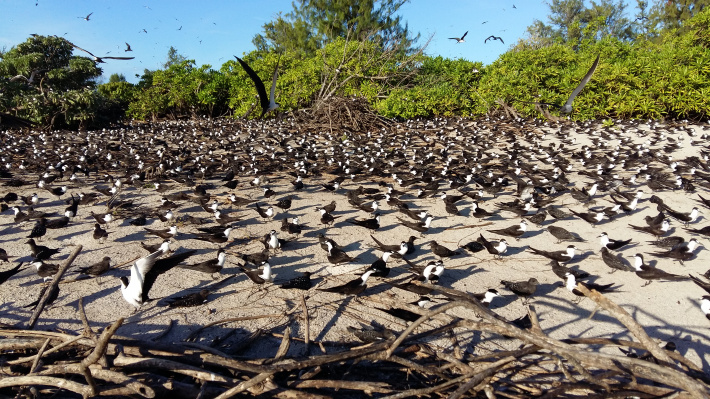 Using satellite tracking tags, 14 fledgling birds have been monitored since they fledged from the Bird Island colony last September for the past 11 months in the hopes of understanding more about these amazing birds.

Sooty Terns are a migratory, ocean going seabird of tropical oceans the world over with a range stretching from the Indian Ocean, throughout the south Pacific, and the Gulf of Mexico.

Spending most of their time scouring the open ocean for food, these birds sleep on the wing only returning to land to breed on tropical islands, in this case Bird Island.

Data collected from the Satellite tracking devices that were attached to the fledgling Sooty Terns showed for the first time the incredible distances that juvenile Sooty Terns will fly in search of food. Stretching from the Eastern coast of Africa to the seas off the coasts of Myanmar and Thailand, the feeding grounds for Sooty Terns helps illustrate the interconnectedness of the marine environment.

An output of the project is maps created by Rachel Bristol to showcase the movements of these juvenile Sooty Terns:

to better determine the connection between Sooty Tern populations and the health of open ocean ecosystems. If Sooty Terns are abundant, then their prey species of small fish and squid are likely equally numerous pointing to a healthy open ocean ecosystem. Scientists hope to utilise these findings to better inform sustainability efforts such as the marine spatial plan and strengthen international collaboration for ocean conservation.

Are you interested in contributing to marine science? SeyCCAT offers grants to help you do so. Subscribe to our updates on www.seyccat.org

Contributed by Rachel Bristol and SeyCCAT 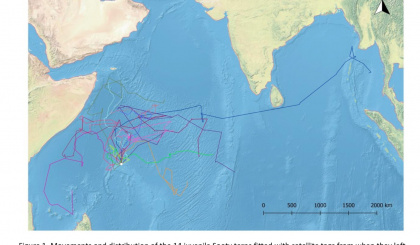 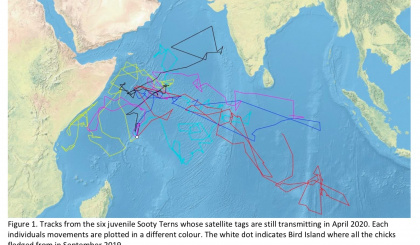