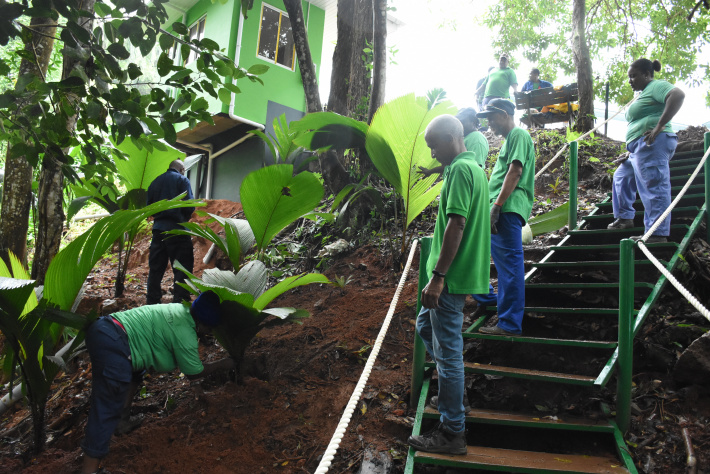 SNPA staff putting the final touches to beautify the trail

As of July 30 members of the public and visitors will explore the Copolia Nature Trail while enjoying some newly added features, including a boardwalk, following the completion of restoration works aimed at ensuring public safety.

The new features of the revamped nature trail also include a ticket office, toilet facilities, benches and detailed information boards.

Talking about the restoration work, senior park officer Erick Sophola said it was important to upgrade the features and standard of the nature trail since it will become a paying attraction upon re-opening.

Mr Sophola explained that since becoming a parastatal organisation, the Seychelles National Parks Authority (SNPA) which is responsible for the nature trail must find its own way and means to generate revenue for its daily upkeep.

Mr Sophola said they have decided that tourists should pay an admission fee of R100 to access the trail, while it will remain free of charge for locals.

He further explained that it was important to upgrade the facility since it is now a paying activity, thus providing a greater visitor experience.

Mr Sophola also noted that the Copolia trail is the first in a series of restoration works planned for the other trails administered by the SNPA.

The SNPA is a parastatal organisation primarily responsible for all of the marine and terrestrial national parks of Seychelles and a number of these parks have been designated since 1979.

The terrestrial parks include Morne Seychellois National Park, the Praslin National Park and the Veuve Reserve on La Digue.