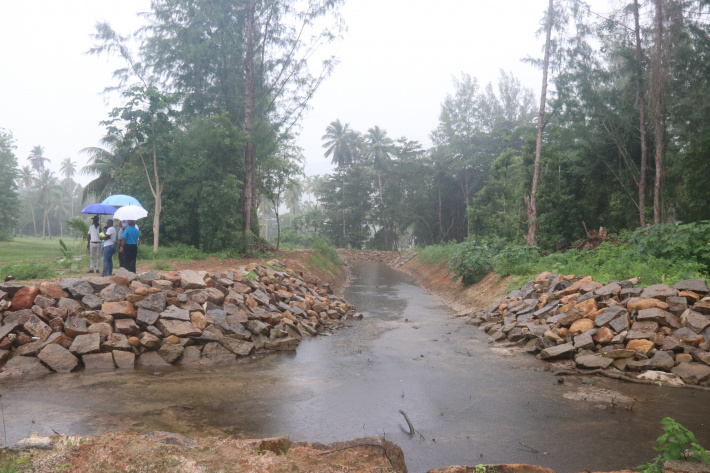 Environment, Energy and Climate Change Minister Wallace Cosgrow has expressed his satisfaction with completed and ongoing projects being carried out to mitigate flooding and coastal erosions in the eastern and southern regions of Mahe.

Minister Cosgrow was speaking yesterday morning following a visit to those projects in the Au Cap, Anse Royale, Takamaka and Anse Boileau districts. During the visit, Minister Cosgrow and officials from his ministry inspected the different projects already completed and those at various stages of completion being undertaken by the ministry in collaboration with the Seychelles Land Transport Agency (SLTA).

“On the whole I am very satisfied with the quality of the work done and also the timeframe in which they were and are being undertaken, given the fact that we had to stop work for a while during the lockdown,” Minister Cosgrow said.

Most of the projects visited were in the Anse Royale district. Accompanied by the principal secretary for energy and climate change, Wills Agricole and other senior officers of the department, Minister Cosgrow visited a completed rock armouring project to protect the coast at one the most popular beach sites – Fairyland. The armouring has cost over R1.8 million.

The second project Minister Cosgrow and his delegation visited was the ongoing reconstruction of a bridge at Bamboo Estate which is costing R2 million. The wider bridge under the main road will address flooding during heavy rain as water gushing down from as far as Anse Louis makes its way to the sea.

Work on the bridge is expected to be completed by the end of September 2020. The delegation also visited part of the beach park which is to be restored with rock armouring to prevent further erosion. Armouring work on that part of the beach is expected to start soon and it is to be carried out by the United Concrete Products Seychelles (UCPS) at a cost of a little over R1.13 million.

“We wish that we won’t have to put rock armouring on all of our beaches as we most of the time try our best to stick to soft engineering measures in terms of nature-based solutions like planting trees, to try to rehabilitate areas affected. But sometimes in worst scenarios we have no options but to use hard engineering, in terms of rock armouring as the alternative solution,” Minister Cosgrow explained, noting that the ministry is working on a setback policy that will impact on future constructions along the coast.

Another bridge under reconstruction under the main road at Sweet Escott was also visited. It is expected to be wider and will cost R800,000. Once completed it will allow for better water circulation and therefore minimising the risks of flooding on farms and housing estates in the area as well as the Anse Royale plateau.

But Minister Cosgrow’s visit yesterday started with the inspection of a drain channel at the ex- hydroponics site, behind the Holiday Apartment at Au Cap. The drain channel is part of a project initiated in the aftermath of tropical cyclone Felleng in January 2013. The project is to remove flood water from Green Estate, especially at the Home for the elderly which was severely flooded during the tropical depression. The long and wider drain, connected from the marsh at the estate, to that at the Reef Golf Club, was completed in June 2020, costing a little over R900,000.

Minister Cosgrow is expected to visit environment protection and climate change mitigation projects in north Mahe in the near future.

The accompanying photos were taken by Patrick Joubert. 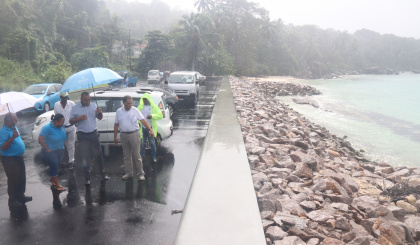 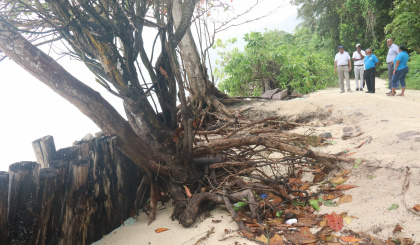 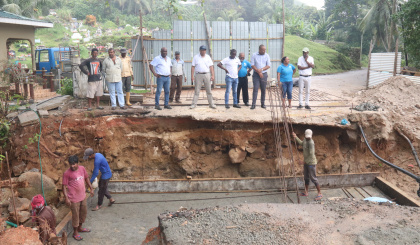