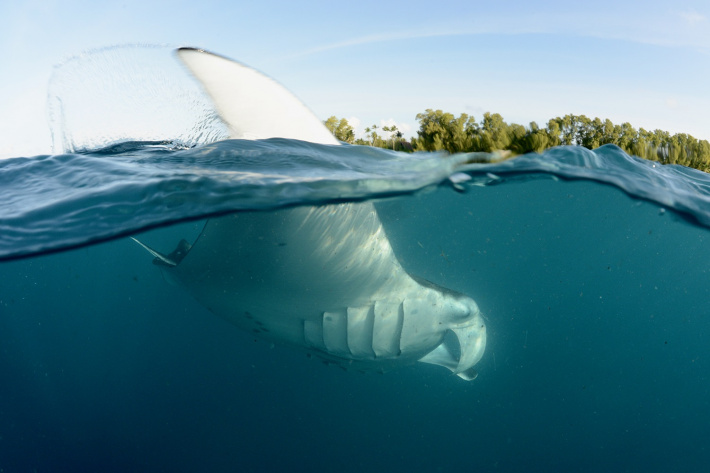 A manta breaks the water's surface, the trees of D'Arros island can be seen in the background © Dan Beecham

A new study from the Save Our Seas Foundation D’Arros Research Centre (SOSF RDC), based on D’Arros Island, highlights the importance of Seychelles to

the conservation of the reef manta ray Mobula alfredi.

Bycombining the data from these techniques, theyshowed that reef manta rays from D’Arros Island and St Joseph Atoll were mostly resident to the Amirantes Island Group.

Their findings emphasise the significance of D’Arros Island and St Joseph Atoll as key habitats from which reef manta raysseldom ventured far.

particular, the importance of D’Arros Island and St Joseph Atoll to reef manta rays highlights the valuable role that the marine protected area (MPA) there can play in protecting this species.

Dr Peel, a Save Our Seas Foundation funded project leader and scientist from the University of Western Australia, worked on reef manta ray data from 2006 to 2019. She aimed to show the horizontal (where do they travel and spend most of

their time?) and vertical (where in the water column do they spend their time?) movement patterns of reef manta rays in Seychelles.

There was a real conservation imperative that underpinned Dr Peel’s interest in manta ray movement ecology. “They are intelligent creatures that play an important role inthe ecosystem,” she explains.

Her previous work has shown that reef manta rays bring important nutrients to the shallow coral reefs around D’Arros Island from their night-time feeding grounds in deeper water further offshore.

“But we don’t know much about their broader movement patterns in Seychelles, and that’s an important knowledge gap to address because the species faces unsustainable levels of fishing pressure globally.”

Reef manta rays are targeted in fisheries around the world for their gill rakers, so

knowing where they spend most of their time helps scientists better manage their populations, even where they are not currently targeted. This includes being able to properly designate MPAs where they can protect a species that is declining in other parts of the world.

“The level of threat that reef manta rays face worldwide is particularly worrying given that as a species they are slow-growing and long-lived, and each female may only produce one pup every one, two or more years,” concludes Dr Peel.

By combining the data from the different methods, Dr Peel and her colleagues pieced together a holistic picture of the extent to which reef manta rays are resident within Seychelles. They found that reef manta rays from D’Arros Island and St Joseph Atoll are highly resident. The findings, therefore, bode well for the placement of the recently designated Zone 1 MPA around D’Arros Island; it may well protect reef manta rays that spend most of their time in this area.

“We had suspected that D’Arros was an important site to reef manta rays because we routinely recognised individuals that returned to the island. We could identify them from photographs, and people were notifying us of repeat visits by individuals they had come to recognise. However, we had no idea of the sheer

Reef manta rays tracked with satellite tags from D’Arros Island and St Joseph Atoll spent up to 87% of their time in the upper water column close to the Amirantes Bank. This is crucial information, as in the future the rays may face increasing threats from fisheries in unprotected waters.

three individuals swam 200 kilometres (125 miles) south to visit the latter atoll. The result gives Dr Peel and her colleagues a logical next step in the

prioritisation of future research efforts: the extension of surveys to include St François Atoll, where photo ID data show repeat visits to the atoll (a possible indicator of site fidelity). More broadly, the study’s results highlight the fact that suitably regulated tourism and fishing activities on the Amirantes Bank could benefit conservation efforts for the whole Seychelles region. They indicate too

that if protected areas in the Amirantes Bank were to be extended, they could be beneficial to reef manta ray populations. None of the satellite tagged individuals left Seychelles’s territorial waters. Seychelles is therefore uniquely placed to protect reef manta rays that may occasionally visit other aggregation sites in the broader Western Indian Ocean, where they face fishing threats.

“These results are really exciting for Seychelles. We are honoured that our research from D'Arros is helping to emphasise Seychelles as a place of rich

marine biodiversity and an important stronghold for sharks and rays in this region,” says the founder of the Save Our Seas Foundation, Abdulmohsen Abdulmalik Al-Sheikh.

The full paper was published in the academic journal Frontiers in Marine Science on July 10, 2020.

Dr Lauren Peel led the study and her host of co-authors included Dr Guy Stevens of the Manta Trust and Dr Ryan Daly, a former director of the SOSF DRC.

A key branch of the Save Our Seas Foundation’s global reach, the SOSF DRC aims to preserve the ecological diversity of this marine area. Since 2004 it has initiated more than 20 targeted research projects and six long-term monitoring programmes that focus mostly on threatened species such as sharks, turtles,

Press release from the Save Our Seas Foundation 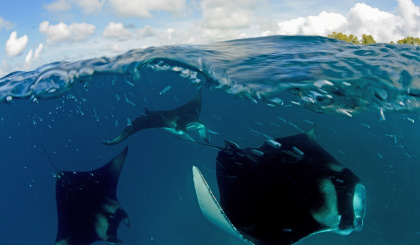 A manta breaks the water's surface, the trees of D'Arros island can be seen in the background © Dan Beecham 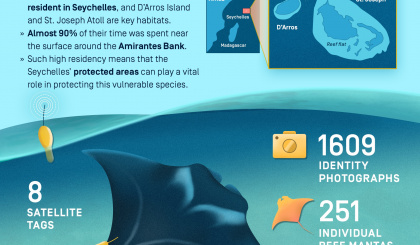