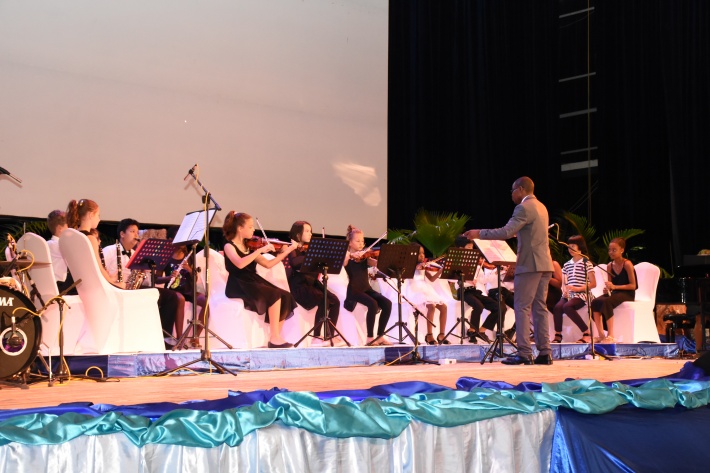 One of the performances during yesterday’s opening ceremony

In attendance were the designated minister Macsuzy Mondon, the principal secretary for culture Cecile Kalebi, the president of PASMAE Elijah Tochukwu Eze, the chief executive of CINEA Galen Bresson as well as invited guests and performers.

The opening ceremony began with an orchestrated performance of Camilla Cabello’s ‘Havana’ by the International School Seychelles before the chairperson of PASMAE, John Chitambo, took the stage for his opening remarks.

“This conference will not have been possible without the Seychelles government and I would like to thank everyone responsible,” said Mr Chitambo.

Mr Chitambo also recognised all the organisations who sponsored the conference including Skychef and the International School Seychelles.

“I made the bid for Seychelles to host the conference as I was motivated by talents that the country has and the need for music education,” he said.

He finished by adding that there are a few things that the participants should expect during this week, one of which is to ensure that music education is promoted through the sharing of knowledge.

“Everything that we do is art and so it defines who we are, if we neglect it we are neglecting our society and the morals by which it is coming from, we are going to share our cultural heritage from different countries and so above all the preservation and promotion of the African heritage through art and music.”

Following Mr Chitambo’s remarks the international school graced the stage one more time with their rendition of ‘A million dreams’ from the movie ‘Greatest showman’.

Following the children’s performance the president of PASMAE, Tochukwu Eze, took the podium and thanked the key note speakers who will take part in the conference as well as all the delegates.

“We are here to talk about sustainable musical art for Africa, and many of us will understand that it is not a hard thing to start something in Africa but the problem is to sustain it and that is why we are here today.”

He added that each and every one of us will learn and relearn to take us to where we belong and sustain musical arts.

“There are governments that do not incorporate music as part of their curriculum so we are as individuals to learn from each other and be able to sustain musical arts in Africa.”

He ended by saying that “if you are hungry get ready to be fed, if you are looking for knowledge get ready to learn as we will have sound lectures delivered throughout the week and by the time the conference is over if you put everything you gain and think over it there is no way you won’t put your mark in Africa.”

“I have a dream that someday from the sea shore of the Seychelles an international sound will resonate around the world and we would have made our footprint into the music industry on an international level,” said Mr Bresson in his address.

He noted that today the music that revolves around us is influenced by the media where a huge part of it is dominated by the European and American culture.

“As one we should guide youngsters to believe and gain knowledge about their culture,” added Mr Bresson.

Mr Bresson ended his address by urging the ministries present to invest in local artists and bring them to schools as they can pass on their knowledge to the next generation.

The ceremony ended with a performance by the national choir.

The conference will end on July 5, following a week of activities, lectures and performances by our visiting guests.