The Electoral Commission Seychelles (ECS) has confirmed the nomination of 75 candidates who will be vying for seats in the legislative election to be held along with the presidential election from October 22-24, 2020.

A total of four political parties – Linyon Demokratik Seselwa (LDS), One Seychelles, Lalyans Seselwa and United Seychelles (US) – presented their candidates for approval during yesterday’s nomination process, as well as two independent candidates.

However three candidates out of the 78 National Assembly hopefuls who had presented their documents to the ECS earlier yesterday morning fell short of the legal requirements and were rejected.

The disqualified candidates are Pascal Uzice (Beau Vallon) and Allen Camille (Bel Ombre) from One Seychelles and Christopher Quatre of Lalyans Seselwa who was bidding for the Mont Fleuri district.

The two leading political parties – US and LDS – saw all of their 26 candidates approved which means that the parties will stand in each electoral constituency.

Independent candidates Keith Andre going for the Beau Vallon seat and Holbert Jean of St Louis also received the green light from ECS to stand in the election.

It took a while for the ECS to make these declarations and present the certificates and nomination packs to qualified candidates, due in parts to the “many objections” which it had received and had to follow up on.

In much the same manner as during the presidential nomination, daycrowds of US and LDS supporters gathered in front of the Sacos Tower and the celebrations were in full swing by the time the ECS delivered the news at around 9.15pm.

The ballot paper order for the legislative election was also selected yesterday and will appear as follows: LDS, One Seychelles, Lalyans Seselwa, independent candidate and US.

In respect to the applications that were rejected, ECS’ chief electoral officer, Manuella Amesbury, said that they were all three rejected on “more or less the same grounds”.

“Either these applications did not have the number of signatories required or there were issues with the ID cards, so it was more or less the same problem,” she highlighted.

“Our chief registration officer processed a lot of applications and we had provided the political parties opportunity to verify these applications. And part of this democratic process allows candidates who are not satisfied with the ECS decision to take up any action they feel necessary,” added Mrs Amesbury.

A point which party leader of One Seychelles, Alain St. Ange, was quick to avail of yesterday evening as he challenged the rejection of his Beau Vallon candidate, Pascal Uzice.

“There is no logic behind why this candidate was rejected[…]we had presented candidates who should have been removed but ECS’ own regulation was not applied, and we cannot have a system of unequal measures,” said Mr St. Ange in his address after the ceremony.

He also stressed on the need to look beyond partisan politics and create a more “balanced” 7th National Assembly.

Meanwhile Roger Mancienne of LDS stated that this upcoming election is one which is historic.

“We are putting ourselves forward to solidify our democracy and the people’s choice. This is important because it is the people that should guide our politics, we are not here for ourselves but to serve others,” said Mr Mancienne.

Lalyans Seselwa’s representative, Neville Kilindo, said: “All I have to say is that let’s get on the field and start working. Because if we all criticise, we will never move forward.”

Independent candidate, Keith Andre, stated: “As a young Seychellois standing as an independent candidate, I hope that the inhabitants of Beau Vallon can rise above partisan politics and understand the seed that we are trying to sow in Seychelles[…]it is easy to stand in a large group but it takes courage to stand alone and this is where I stand today.”

Holbert Jean, fellow independent candidate, expressed the same sentiment and added: “It is important for Seychellois to understand that this is the legislative election, not the presidential election. A lot will be said during this campaign season and St Louis inhabitants especially should be able to see themselves in all the promises that are going to be given. As a voter you are going to vote for your children’s future and that of your country.”

Not one to mince words, US’ representative Simon Gill urged all supporters to respect the billboards and campaign posters that are going up since there have already been instances of vandalism.

“This election is one which is occurring in exceptional times and United Seychelles, more than ever, is extending out a hand to call on the people to join together to save Seychelles from this economic and financial crisis,” said Mr Gill.

Yesterday’s Nomination day was significantly different to the nominations for presidential candidates on Wednesday, in that candidates’ documents were verified by electoral officers assigned to each of the 26 districts for which they are standing.

Among the requirements candidates were required to satisfy are a R1500 fee, signatures of 50 constituents, pictures and logos.

First to bring his documents at the Electoral Commission’s office was Holbert Jean, who is running as an independent candidate for St Louis.

With a campaign focusing on unifying the district of St Louis, Mr Jean told the press that he is running as an independent candidate because he wants to unite the entire district no matter what political party they are affiliated with.

Concerning the backing of One Seychelles party leader, Alain St Ange, Mr Jean stated: “I am not affiliated with One Seychelles in any way; my sole purpose is to work for the people of St Louis.”

The candidate noted that he is positive he will win his seat in the National Assembly as the people are ready for change.

Mr Jean was followed by the 26 Linyon Demokratik Seselwa (LDS) candidates, at around 9.15am, accompanied by party leader Roger Mancienne, presidential candidate Wavel Ramkalawan and treasurer of the LDS executive committee Roy Fonseca.

Mr Mancienne said the procedures were going well, despite the complications brought on by the Covid-19 pandemic and health regulations in place forbidding mass gatherings.

He urged the voting public to realise the importance of the electoral process and respect health norms and regulations.

He further expressed LDS’ confidence for the general elections, based partly on the work of the LDS MNAs in the sixth assembly, when LDS secured majority seats.

“In the past four years, we have worked really hard and we have used the position in politics to really push forward the agenda and the programme of LDS. We have done a lot of work in the districts, hence we are really confident that we will win a majority in the assembly, as well as for the presidential election. I know that we have strong support coming from the public as well as enthusiasm on the part of our supporters and activists, which I truly feel will put us in the forefront of the election,” Mr Mancienne stated.

Speaking to the press, party president Vincent Meriton said he is presenting a group of MNAs that will support President Faure in delivering his mandate.

“Our number one goal is to help our country out of its financial struggle which is why our team is mixed with professionals, youths and politicians,” said Mr Meriton.

He added that in the past five years the government has delivered for the people of Seychelles and this can be seen in new infrastructure, quality of health and the education of the youths.

The party president also noted that he hopes there will be support from the assembly to the executive branch so that we can move forward towards a brighter future.

One Seychelles leader Alain St Ange and running mate Peter Sinon accompanied their party’s 20 potential candidates for the nomination process. Eventually, as mentioned above, only 18 qualified to contest the election. The Beau Vallon and Bel Ombre candidates were disqualified. The six other districts where One Seychelles will not be represented in the election are Baie Lazare, Port Glaud, St Louis, Les Mamelles, Mont Fleuri and Grand Anse Mahé.

“What I would like to announce to Seychelles today, is that we have not filled candidates in all districts, and we have done so with the idea of finding places where we can have a chance to be first past the post,” he said.

“We will await the nation’s decision. Because we have walked a lot of districts over the past two years so we have identified the districts where we can make it first by the post,” he stated.

Mr St Ange also expressed support for independent candidate for St Louis Holbert Jean, whose principles are in line with that of One Seychelles, he said.

His motivation he says is to sow a seed and pave the way for other independent candidates, and inspire independent thinking.

“Definitely, I came here to win. And I am confident that if the nation listen to what I have to say, they will see my campaign is completely different. My campaign will be me meeting with the residents of Beau Vallon, one-to-one so we can talk,” Mr Andre stated.

Patrick Pillay, party leader for ‘Lalyans Seselwa’ who was initially running for president before being disqualified, presented four candidates to the electoral commission. They were William Cadeau (Les Mamelles), Christopher Quatre (Mont Fleuri), Neville Quilindo (Au Cap) and Weston Wirtz (English River). However, Quilindo was eventually disqualified, which means that Lalyans Seselwa will be contesting the election in three districts only.

Speaking to the press Mr Pillay noted that the reason Lalyans Seselwa has presented only four candidates instead of ten like they initially said, was because some dropped out due to his (Mr Pillay’s) disqualification from the presidential race.

He said he did not want to put his name as a candidate for the National Assembly because he will continue his political career “behind the scenes”.

The full list of candidates who will be contesting the National Assembly election in all the districts as well as a selection of pictures of the Nomination ceremony are published in our inside pages. 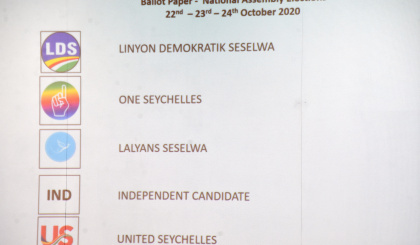 The order in which the candidates will appear on the ballot paper (Photo: Joena Meme)