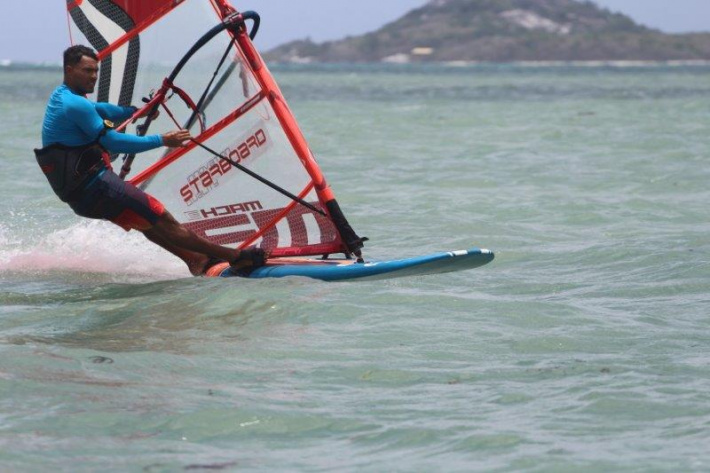 Bertrand Lablache came up short to improving the windsurfing record

Dominique D’Offay won the Mahé to Praslin kite surf race in a new record time, while Bertrand Lablache came up short to better the windsurfing best time which has been standing for 18 years now.

This year’s races took place on Saturday and started in the Victoria harbour.

Dominique D’Offay smashed the kite surfing record for the Mahé to Praslin race with a time of 1 hour 15 minutes 09.68 seconds (1h15:09.68) ‒ more than seven minutes faster than the previous mark established by South African Steven Taylor in 2008 which stood at 1h22:27.

Runner-up Neddy Radegonde also completed this race inside the previous record, clocking 1h21:57.59 in a competition which had attracted six kite surfers but one of them, namely Mervin Constance, had to abandon the race close to Cousin island after his kite burst in strong winds.

D’Offay, who took up kite surfing four years ago, told Sports NATION that he was ecstatic to have shattered this record in a very difficult and demanding competition.

“I’m surely very happy for two reasons, mainly because this year we were able to complete the race which was not the case last year and secondly I also managed to shatter the record belonging to a South African which makes me very proud. However, it was a tough race with light winds and choppy seas where I fell four times but I persevered to win which was very nice,” D’Offay related to Sports NATION.

Lablache misses out on new record

Bertrand Lablache won the windsurfing race but missed out on his target to break the longstanding record of 57 minutes 51.62 seconds set by Stephan Stravens in October 2002.

Lablache had the record in his sight though as he started very well, but the drop in wind midway through the race made him struggle as he also faced tough competition from his Praslin teammate Jean-Marc Gardette. But he held on to claim the top spot with a time of 57 minutes 59.79 seconds (57:59.79), whereas Gardette registered a time of 58:15.75 to be placed second, while Jacquelin Languilla was third overall in 1 hour 00 minute 52.83 seconds (1h00:52.83).

Lablache said after the race that he was satisfied though even he did not break the record but was happy that his junior windsurfers whom he trains managed to complete this race this year after they gave up last year due to lack of wind.

“Today we had light wind throughout which was not in my favour as I had prepared for strong winds and it had gone well when we left Mahé but when the wind dropped, it caused me some problems as Gardette closed in on me but I was strong enough to win which was pleasing but for me my satisfaction is that the four juniors completed the race and this is good and encouraging,” noted Lablache who has won this race on four occasions.

As for Gardette, he was quite pleased with his second position as he said he did not expect to do as well as he did.

“I was close to Bertrand all throughout the race and I am very happy with my performance as I did not expect to come out second and also to register a good time as it is the best time ever for me in this race,” Gardette revealed to Sports NATION.

Seychelles Yachting Association (SYA) chairman Alain Alcindor was very happy with the general organisation of this race where he said there was no safety issue and the wind was good enough for the surfers to complete this race. 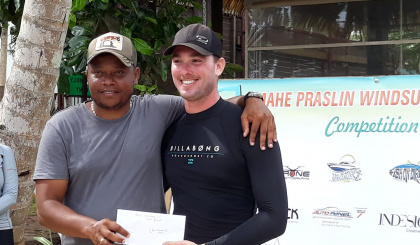 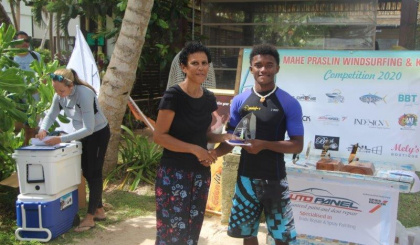