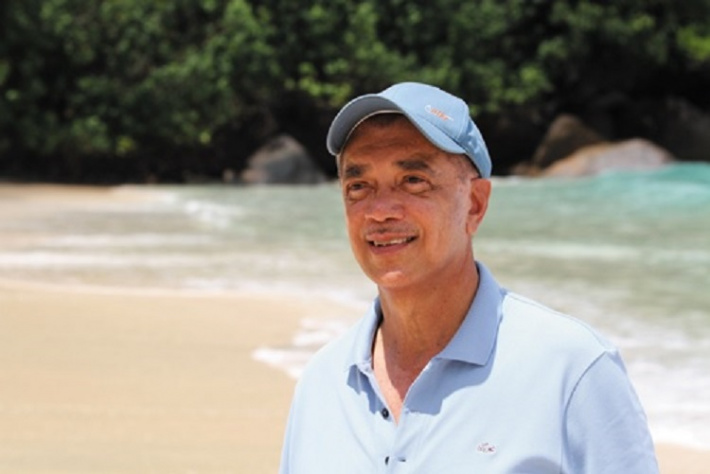 From Green to Blue Economy: A voyage that began in Africa

The concept of the Blue Economy, which has become a rapidly evolving development strategy, was born in Africa, in the Seychelles. It began as one leader’s vision and now encompasses the world, as Wanjohi Kabukuru explains.

First, it was the ‘Green Economy’, and now we have the Blue. The ‘Blue Economy’ has become a buzz phrase denoting far-reaching socio-economic and structural transformation ideals, aimed at uplifting livelihoods and bolstering economies.

Just how did it develop within a decade to become an in-vogue, adaptable concept, which has led many governments to reorganise and adopt it as a key administrative pillar?

Going back to its beginnings, the ‘Blue Economy’ narrative lifted anchor and set sail from Seychelles, the island nation deep within the Indian Ocean. Its originator and strongest advocate was the former President James Michel.

“Could there be a better name for what I was envisaging than the Blue Economy? It is clear in its meaning and easy to use, the allusion to colour draws one to the sea, while, and in contrast a complicated scientific term would not do,” says Michel, who retired in October 2016.

“I liked the fact that people were already familiar with the Green Economy, and in that respect, the Blue Economy would logically become its counterpart – one for the land and the other for the sea.”

As early as 2008, the Seychellois leader had re-engineered his finance strategy and retooled his diplomatic service to leverage on oceans under the banner of the ‘Blue Economy’, seeing it as an anchor for economic development and a flag for the Indian Ocean archipelago’s foreign policy.

“In just a few years, from as recently as 2012, the Blue Economy concept has emerged as the right idea at the right time. It offers a new frontier for human development,” says Michel. “Nor is it limited in its potential, with the prospects of benefits for island nations, for coastal nations and for land-locked nations as well.”

Twelve years after it lifted anchor, the Blue Economy has become a fashionable topic of Presidential speeches and a theme of many global summits.

“We were doing so many things right but something was missing. As I watched the waves break onto the beach, the answer gradually came to me. In fact, in its enormity it could not have been more obvious. The missing link was the sea itself. If only we could find a way to protect the oceans while at the same time, tapping into their hidden depths,” recalls Michel.

“Let us bring [the] environment and economy together, within a new framework – not one without the other, but the two in unity. So this, quite simply, is how the idea of the Blue Economy was born in my mind. It was born of necessity but also, [a] vision of realism and hope. It was an idea born within sight and sound of the sea itself. Where better for the concept to take shape than in the middle of one of the world’s great oceans?”

Michel used every available opportunity to advocate the idea through bilateral parleys with nations in the Middle East, Asia and Africa. His next line of approach covered multilateral counterparts in the regional blocs and across the world, reaching out to the Alliance of Small Island States (Aosis), the Indian Ocean Commission (IOC), the Indian Ocean Rim Association (IORA), the African Union and even at the UN.

It was tough at first and Seychelles had to keep adjusting the sails to steer through the welter of information that threatened to drown the Blue Economy message.

“The idea of the Blue Economy formed first in my mind as a strategy for Seychelles. We are an island nation with a very limited area of land but a vast extent of surrounding sea. And beyond the limits of our Exclusive Economic Zone is the rest of the Indian Ocean,” President Michel writes in his book ‘Rethinking the Oceans: Towards the Blue Economy’.

“It was only in 2012 that the Blue Economy really came on to the world agenda. Ideas are born of necessity and Seychelles brought this forward because the timing was right. We had by then introduced far-reaching economic reforms and were emerging from the Global Financial Crisis in better shape than many other nations, but to assure our recovery and to lay the foundations for long- term prosperity, we needed to do more.

“Thus we charted a course towards the Blue Economy and because the oceans know no boundaries, we shared our vision with the rest of the world,” he writes.

At the UN’s Conference on Sustainable Development in Rio de Janeiro in 2012, which marked 20 years since the first conference in the same Brazilian coastal resort city in 1992, the Blue Economy found its way on to the global agenda. Intense lobbying by coastal and island states culminated in a negotiated document, “Green Economy in a Blue World” as one of the outcomes of

With the vision in place, Seychelles had already structured its position in readiness for the third International Conference on Small Island Developing States (SIDS) in Apia, the capital of Samoa, in September of the same year.

In Samoa six major themes – namely, oceans and seas; sustainable economic development; climate change and disaster risk management; energy; food security and waste management; together with social development – were identified as core bulwarks to lift the SIDS out of the vulnerability/resilience conundrum.

In the final outcome document, SIDS Accelerated Modalities of Action (SAMOA-Pathway), Michel had made his indelible mark as in December 2014, four months after the SIDS conference, he landed an invitation to the Élysée Palace by the then French President, François Hollande.

The influential diplomatic gravitas that Michel held over most of the Aosis was crucial for the French as it lobbied the world in readiness for the climate change conference in the following year in Paris. In return, Aosis achieved most of what it wanted when the Paris Agreement was passed in December 2015. This was a major diplomatic coup for Seychelles.

Coincidentally, on World Oceans Day, June 8, 2016, Michel decided to launch his book ‘Rethinking the Oceans: Towards the Blue Economy’ at a high-profile reception on the Seychelles State House lawns in the capital, Mahé.

This was eight years after the idea had started to crystallise and Michel had conducted shuttle diplomacy in the littoral states, covering the Atlantic, Indian, Mediterranean and South China Seas (Aims) alongside the Pacific, Caribbean and Oceania, championing the Blue Economy cause.

At the book launch, President Michel called on Seychellois to be proud of what their diplomatic offensive had achieved.

“Today we have managed to internationalise it and put it on the agenda of many international organisations. We have achieved something powerful in just a few years.”

Four months after he launched his Blue Economy book, President Michel retired, only to find that his retirement plans of beachcombing the Praslin, La Digue and Mahé beaches would have to wait as his diary was already full.

When he left office in October 2016, Michel transitioned into a global circuit speaker at lecture halls in Asia, university podiums in Europe, and gracing expert panels at think tanks in the Americas, unpacking the Blue Economy. Moreover, two years after retirement, Michel’s successor, President Danny Faure was appointed by the AU as ‘Champion for the Development of the Blue Economy in Africa’. The voyage continues.

The Blue Economy, which encapsulates all sea-related commercial activities, generates annual benefits of around $2.5trn. It has become a major development pillar around the world but it was Africa that first mooted the concept. Despite this and despite the fact that Africa possesses some of the potentially richest oceans around its extensive coastline, the continent has hardly scratched the surface of this extraordinary boon.

In the four articles making up this Special Report, our environmental expert, Wanjohi Kabukuru, looks at the global Blue Economy and Africa’s place in it – and what action the continent should take to carve out a bigger piece of the pie for itself.