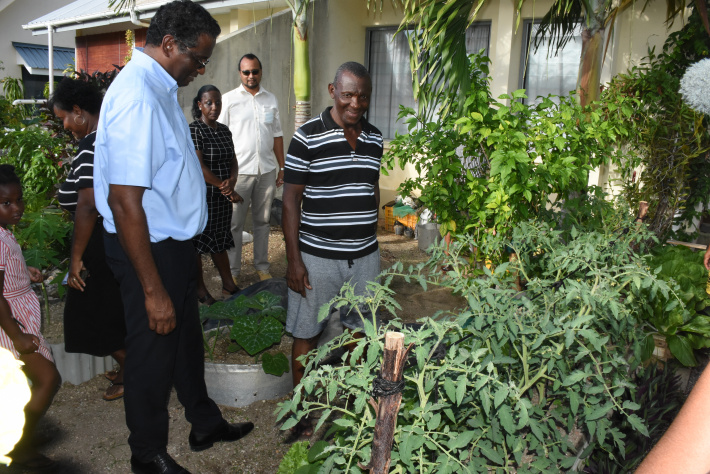 Tomatoes, lettuce, herbs, Chinese cabbage,cucumbers, chillies and pumpkins were aplenty in a number of homes in Perseverance where fisheries and agriculture minister Charles Bastienne visited on Thursday.

The visit was one of the main events organised last week to commemorate World Food Day, observed on Friday, October 16. This year’s food day theme was ‘Grow, nourish, sustain, together. Our actions are our future’.

Minister Bastienne, accompanied by principal secretary for agriculture Antoine-Marie Moustache and other officers from the ministry, visited over a dozen houses in Perseverance 1 and 2 that had participated in the renaissance programme, ‘Each Home, A Garden’ (Sak Lakaz, En Zarden).

The Ministry of Fisheries and Agriculture kicked off this programme along with the ‘Perseverance an Mouvman’ group in Seychelles newest’ district which will be emulated in other districts across the country.

The majority of the 88 Perseverance homes that agreed to take part in the initiative a few months ago were ready to harvest their crops by the time Minister Bastienne undertook his visit.

The home gardeners were assisted by agricultural officers who conducted home visits to pass on advice and techniques on backyard gardening.

James Florine, a 69-year-old retiree, said that he decided to join the ‘Each Home, A Garden’ initiative with the aim of having his own little patch of vegetables.

As someone who has been farming since the age of 13, Mr Florine said that he cannot do much given his back problems but noted that he likes to water the crops.

“It is going well so far,” said Mr Florine.

At the home of Garry Rachel, the family had gone above and beyond to plant lime trees and root vegetables, although the latter were not doing well due to the desalinated water available in Perseverance.

To that effect, Mr Rachel said that he is looking to acquire a rain water collection system that would help his plants thrive.

“I decided to embark on this initiative because vegetables are a bit expensive by the time it reaches the market and I do not really know what they put in them. So I started to grow some on my own and I hope to continue because it is great feeling to eat a salad sourced from my own backyard,” said another Perseverance homeowner, Elma Cassime.

Meanwhile over at Gonzague Adelaide, lettuce were perfect for the picking and Mr Adelaide noted that he loves growing vegetables for his own consumption as well as to give away to friends and family.

“I have been planting since I came to Perseverance; I have pumpkins, tomatoes, bred (Chinese cabbage),lettuce. I will continue because farming is in my blood,” said Mr Adelaide.

Impressed by the results of the initiative in mere months, principal secretary for agriculture Antoine-Marie Moustache noted that ‘Every Home, A Garden’ is one of the many steps being undertaken to ensure food security in the country.

“The high level committee for food security recently re-launched an old national campaign called ‘Every Home, A Garden’. At the same instant it also launched ‘Every School, A Garden programme,” explained Mr Moustache.

The two campaigns work in tandem to support each other since schools act as the source from which homeowners can acquire vegetable and fruit saplings.

“If the schools are fortified to supply these plants, each home can buy these young plants and by doing this the community can help raise a fund for the students,” said Mr Moustache.

“As proven by our visit today, there is great joy in growing and harvesting your own food. The homeowners know that there are no pesticides in their produce, so each time they need some bred or lettuce they can just pop over in their garden and get some.”

PS Moustache also highlighted the various benefits of having a backyard garden including using gardening as a therapy, a time for family bonding, reducing household expenses, gifting vegetables and fruits to others, and even selling the end produce for additional income.

“As we have seen, if everyone starts their own backyard garden, it would have an extraordinary effect when it comes to the country’s food security,” he added.

“We are going through a difficult period; we do not know what tomorrow will bring so a garden at home can provide some respite to any eventuality.”

Mr Moustache stated that families living in flats with balconies can also grow a few crops, such as lettuce and herbs, that do not require a lot of space.

On his part, Minister Bastienne said that his visit showcased a good and encouraging start to the backyard farming initiative.

“A lot of people we spoke to have never grown vegetables or fruits, and yet they are now harvesting their crops – it is very encouraging. Some homes have lettuce and bred that could last them up to two weeks and shows that this is a programme that should be extended to other communities.”

The accompanying photographs show some of the homes taking part in the programme that Minister Bastienne visited. 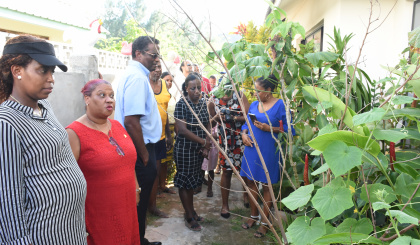 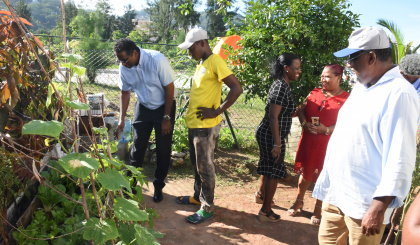