The MNAs, Clerk and Deputy Clerk in a souvenir photograph with President Ramkalawan and Vice-President Afif (Photo: Jude Morel)

The seventh National Assembly was sworn in yesterday morning with former opposition, Linyon Demokratik Seselwa, securing its absolute majority seats in the parliament.

This followed the National Assembly elections held on October 22, 23 and 24, where the tables turned and Linyon Demokratik Seselwa (LDS) secured 25 seats (20 elected and five proportional), while United Seychelles (US) secured 10 (six elected and four proportional).

The 35 members of the National Assembly (MNAs) took the oath of allegiance, kicking off the first day of work for the members of parliament.

The MNAs were sworn in before the outgoing Speaker Nicholas Prea and witnessed by President Wavel Ramkalawan, Vice-President Ahmed Afif and other guests.

As the new MNAs took their oaths in the National Assembly’s chamber, the secretariat were removing the framed photographs of the former speaker and deputy speaker ‒ Mr Prea and Ahmed Afif ‒ of the sixth National Assembly in preparation for the incoming elected speakers.

In the morning inauguration ceremony, the speakership passed from Mr Prea to LDS party leader Roger Mancienne who was the only person nominated for the seat.

Honourable Gervais Henrie is the new deputy Speaker of the seventh cohort, while Honourable Sebastien Pillay and Honourable Bernard Georges have been elected as leader of the opposition and leader of government business respectively.

Mr Mancienne is not unfamiliar with the work of parliament since he was an MNA for opposition party Seychelles National Party (SNP) from 2001 to 2006.

However, Mr Mancienne stressed that with time that has gone by and revised standing orders and procedures that have been amended, he will need the help of the secretariat to help him navigate his new role as speaker.

“There is a very good staff here. I have met them and they have pledged that they will give me every help I need. I am confident that they have the experience that I am lacking at the moment…,” said Mr Mancienne.

“I hope to contribute my sense of direction, guidance, leadership and also a sense of good management and organisation to make the Assembly work smoothly and effectively.”

In regards to being chosen as speaker, Mr Mancienne said: “I consider it to be an honour and very great sign of appreciation from my party, its leadership and from our elected members that they accepted my nomination and voted unanimously.”

Meanwhile, in his first address as speaker before the National Assembly in the afternoon, Speaker Mancienne highlighted that new parliamentarians should be mindful of their roles and work to the highest standard for their electorates.

As per the Constitution, the house must also elect the leader of the opposition, with the exception that only opposition members are allowed to make proposals. Honourable Sylvanne Lemiel, the US representative for Anse Royale, forwarded the proposal to appoint Honourable Sebastien Pillay, which was seconded by Honourable Audrey Vidot, member for Roche Caïman.

In accordance with Article 84 (a) of the Constitution, LDS member for Anse Aux Pins Honourable Clifford Andre proposed that Honourable Bernard Georges be appointed as leader of government business. The motion was seconded by Honourable Regina Esparon, representative for Glacis.

Prior to commencing its official duties, which as of yesterday is appointing ministers proposed by President Wavel Ramkalawan, deputy clerk Alexandria Faure was also sworn into Office. Ms Faure took the oath of allegiance, in which she too promised to uphold and protect the Constitution and the laws of Seychelles.

A historic first for the National Assembly was the swearing in of its first MNA living with disability, LDS proportional member Naddy Zialor.

The 32-year-old with cerebral palsy, a group of disorders that affect movement and muscle tone, was working in the department of employment before his move to parliament.

“It was a very emotional moment for me and for Seychelles by the fact that it is the first time in our history that a person living with disability is in the National Assembly,” said Honourable Zialor.

“My specific objective is to advocate for the rights of persons living with disabilities but at the same time to see how best we can move the country forward ‒ improving laws and regulations on disability issues and national issues,” he added.

As a former staunch United Seychelles/Parti Lepep supporter, Hon. Zialor noted that his change in party affiliation “does not change my principles but the way of seeing things need to change, and this was one of the main characters that drove me to swing from United Seychelles to LDS”.

“I am still Naddy Zialor and I still carry the same principles but the way of doing things I feel that it is the right to be with the current government and LDS party.”

A notable figure on the side of the now opposition, United Seychelles, is ex-minister Wallace Cosgrow who served in the recently departed government.

From minister to a legislator in a minority party, Hon. Cosgrow noted that his experience in the executive branch will allow him to better challenge the present government, particularly in regards to policies and promises made to the populace.

“It was a wonderful experience. I have spent about five years and 10 months in the executive working with the president, in fact two presidents. And when the party called on me to work with the Assembly, I answered the call positively so I am very happy to start working in the other branch of government.” 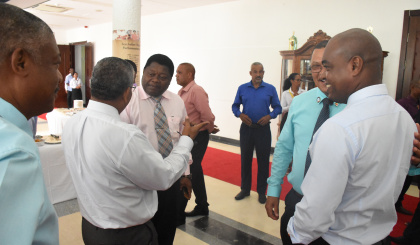 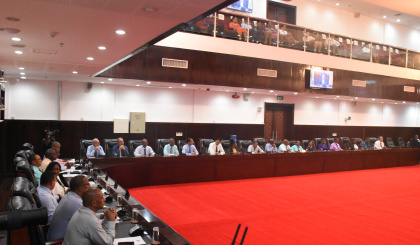 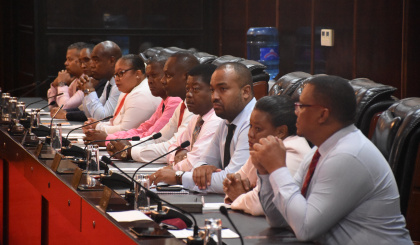 The United Seychelles team in the Assembly (Photo: Jude Morel)