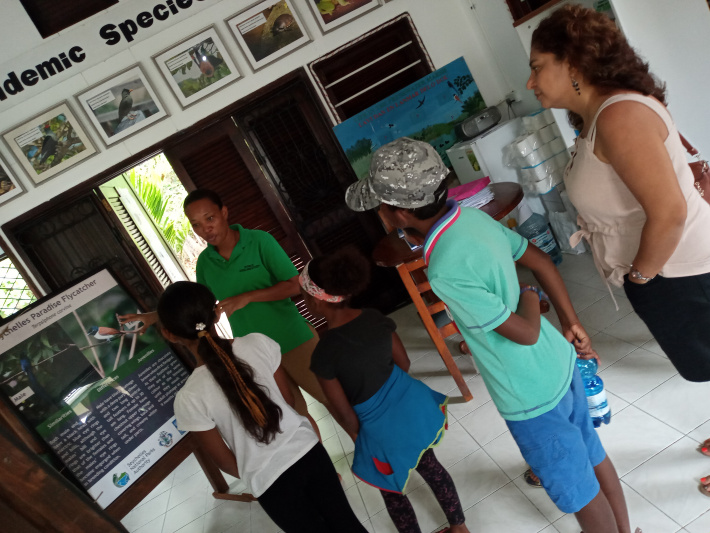 ‘A small piece of heaven’

La Veuve Special Reserve located on La Digue is a special place where one can spend an hour breathing and admiring our nature.

La Digue is the fourth largest and third most populated island in the Republic of Seychelles and covers a total land area of 16 square kilometres.

The Special Reserve is composed mostly of mature badamier and takamaka woodland, similar to original indigenous low lying forests of Seychelles which was in large part destroyed early in the history of human colonisation.

The reserve also contains areas of the adjoining freshwater marshland along the southern boundary, and many natural ponds as well as two man-made ponds Most of these standing water areas exist only during the rainy season.

To know more about this reserve, we had a chat with the assistant forestry officer, Josianna Rose.

In 1990, approximately one third of the Reserve had the tall trees selectively cut to allow understory trees to grow and in turn encourage a more staggered vegetation height. Many takamaka seedlings, papaya, and low scrubby vegetation occur in these areas. The purpose of this tree felling was to test the effects of a low understory of trees on the increased ability or preference of flycatchers to feed in these areas. The results are inconclusive and there was a public outcry on La Digue which was televised. Since then, woodland management of the reserve has remained non-interventionist. Large areas of the reserve, excluding the eastern portion, are traversed by narrow walkways. These walkways comprise a nature trail as well as access to the residences outside of the southern boundary of the reserve. An information centre is located outside of the main entrance to the reserve. The centre has wall displays depicting general information about the flycatchers as well as books providing information on various aspects of the Seychelles natural environment. A park ranger is available there to answer any questions and provide guidance in locating the birds.

It now known that the reserve is too small to maintain a viable population of flycatchers. Studies have shown that the highest density of breeding territories is on the western plateau of La Digue in areas of woodland close to standing water or wetland areas. Various proposals have been submitted regarding the purchase and/or preservation of land to include significant portions of the freshwater marsh (such as from the southern boundary of the reserve to L'Union Road), as well as the largest remaining woodland blocks at Allee Kersley, La Passe Woodland, and remaining woodland blocks in L'Union Estate.

In the 1960s, the rarity of the Seychelles Black Paradise Flycatcher began to cause concern and in 1970 a local man, Abraham Niole, was employed to protect and monitor the birds and their nests by the Royal Society for Nature Conservation (RSNC). In 1980/81, Christopher Cadbury and Tony Beamish initiated a reserve for the Veuve. The area of land which currently makes up the reserve was leased by the RSNC from Mrs Rene Payet. The fenced reserve was managed by RSNC and the Seychelles National Parks and Nature Conservancy Commission. The Reserve was officially opened in 1982, to be managed by RSNC jointly with the Seychelles National Environment Commission through one ranger Gd11. In 1989, the Seychelles government purchased the reserve land. In 1991, La Veuve Special Reserve was for the first time legally designated and Regulations (Annex 1) enacted under the management of the Conservation and National Parks Division of the department of environment. By 1992 staff had increased to two park rangers and one field worker. A Peace Corps volunteer was recruited as assistant parks officer. A modern office was leased for the staff and new signs and demarcation bollards installed. In 1993, an information centre for the reserve was officially opened.

The National Parks and Nature Conservancy Ordinance of 1969 defines a Special Reserve as “an area set aside in which characteristic wild life requires protection and in which all other interests and activities are subordinated to this end”.

The primary purpose of the designation of La Veuve Special Reserve is to provide a protected breeding and feeding habitat for the rare endemic bird species, the Seychelles Black Paradise Flycatcher (Terpsiphonecorvina) population on La Digue.

The reserve also provides protection of wildlife habitat and plant species from harmful disturbances. Its designation as a Special Reserve signifies importance maintenance of biological diversity and ecological processes being allowed to occur without human intervention.

The La Veuve Special Reserve is used for conservation, tourism, education, and monitoring and research, and is an important breeding and nesting habitat for the Paradise Flycatcher. It is home for numerous plant and animal species, many of which are endemic to Seychelles.

The primary use for La Veuve Special Reserve is to provide a protected breeding and feeding habitat for the Seychelles Black Paradise Flycatcher. Badamier and Takamaka trees are the preferred tree species for nesting sites by the flycatchers. There are currently six breeding territories held by male flycatchers within the boundary of the reserve. While the reserve does not provide enough habitat to maintain a viable population of flycatchers, the value of the reserve as remaining habitat for the birds is increasing due to the rapid removal of hardwood trees on the plateau of La Digue.

In addition to suitable breeding habitat, the flycatchers benefit from the abundance of insects in and around the reserve. This is in part due to the nearby freshwater marsh, natural ponds, and man-made ponds which provide breeding grounds for many insects. It is also the policy of CNP to allow leaf litter to remain on the ground, which provides an important source of insects for the birds. The reserve provides protection of wildlife habitat and plant species from harmful disturbances. Its designation as a Special Reserve signifies importance maintenance of biological diversity and ecological processes being allowed to occur without human intervention.

Approximately 500 foreign tourists come to La Digue Veuve Reserve each year to follow the nature trail and see the birds, and to sit quietly in an area which exemplifies what the low-lying forests of Seychelles used to be like. Many foreign visitors come to Seychelles specifically to see the Seychelles unique wildlife, such as the Black Paradise Flycatcher. The reserve also provides recreation opportunities for the local community.

Another important use of the Reserve is its value in promoting awareness in the local population of the importance of protecting the Seychelles natural environment and the Seychelles Flycatcher. The Reserve provides a place for teachers and reserve staff to conduct educational activities aimed at the local school children and to teach them about the processes of nature. The

The reserve is located beside the only school and conservation education programmes are presented by rangers and teachers to students.

The Special Reserve provides an important potential area for research, which could be compared to other woodland areas on the plateau where flycatchers breed to determine habitat quality factors.

Seychelles NATION: What specific plants/birds are there in the reserve?

Josianna Rose: The Veuve Reserve is mostly covered with a variety of different plant species including many endemics and introduced plants. The most common ones are badamier and takamaka trees. The most understory plants are mostly Bwa kafoul and also the invasive species Pig yam (Vya). Others are: Bwa blan, Bwa torti, Bwa sousouri, Bonnen kare,Bwa dir.

For birds, in the park we have non-endemic and endemic bird species. The endemic birds are firstly the Seychelles Paradise Flycatcher which is listed as a critically endangered on the IUCN Red List. Others are: Seychelles Bulbul, Seychelles Sunbird, Seychelles Fruit bat, Seychelles Blue Pigeon. Non-endemics are: Madagascar Fody, Madagascar Tourtrel Dove, Ground Dove, Moorhen and Common Myna.

Seychelles NATION: Why is this reserve important and how many people take care of the reserve?

Josianna Rose: This reserve is important for its conservation values. The conservation values of the Veuve Reserve are first and foremost the population of flycatchers it supports (the 7.8ha official reserve supports c.8 territories). Secondary conservation values are a rare example of mature badamier (Terminaliacatappa) and takamaka (Calophyllum inophyllum) dominated woodland, similar to the original indigenous low lying forests of the granitic Seychelles which was mostly destroyed early in the history of human colonisation that supports populations of endemic flora and fauna. Thirdly the reserve also contains areas of the adjoining freshwater wetland along the southern boundary, and numerous seasonal pools, some of which are natural, and some are man-made with the aim of increasing the abundance of flying invertebrates (flycatcher food).

Seychelles NATION: Does it get many visitors? 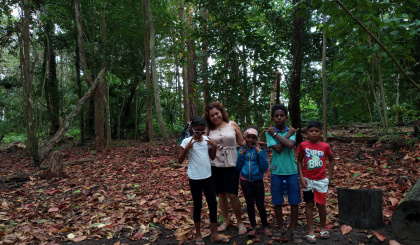 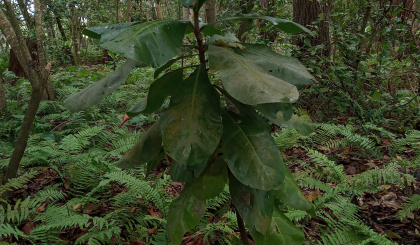 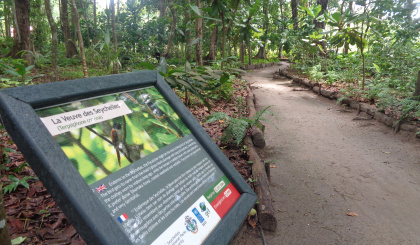