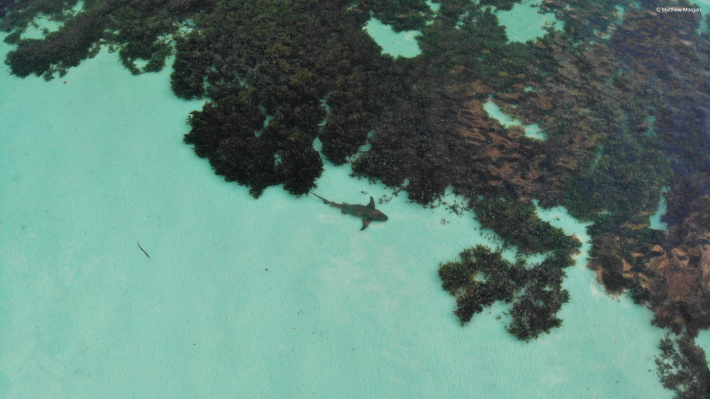 In this article, Izzy Sasada talks to the ‘guardians’ of the carbon sinks – those who have dedicated their lives to the protection of seagrass meadows in the Seychelles.

Seagrass is one of three blue carbon ecosystems, alongside mangroves and saltmarshes. With the ability to capture carbon dioxide up to 50% faster than our ‘green’ carbon ecosystems – trees – it is one of earth’s most efficient carbon sinks as is a much-needed based weapon against climate change.

Another equally important benefit of seagrass is that it acts as nursery habitat for many commercially important species such as rabbit fish.

The benefits derived from the protection of seagrass will also have an international impact. Annike Faure, from SeyCCAT’s Coastal Wetlands and Climate Change Project, explains, “Under the Paris Climate Agreement, the Seychelles has to report a ‘Nationally Determined Contribution’ regarding carbon emissions every 5 years. It was only in 2013 that a way of measuring it was developed. Before that we could not claim it as nature-based solution and include it in our report”.

This is where SeyCCAT’s Coastal Wetlands and Climate Change project comes in. As Annike explains, “the project’s aim is to collect data of the carbon sequestration capacity for seagrass in the Seychelles. This data will help the country to inform its nationally determined contribution”.

Ameer also explains that blue carbon credit is “a hotly debated topic” around the world, elaborating that “if the Seychelles can quantify the amount of carbon stored in the country, this will have international repercussions”. It is hoped by scientists that by quantifying blue carbon, this will give the country a new opportunity for environmental funding at a global level, while upholding the Seychelle’s position as an ocean pioneer, and drawing attention to the potential of seagrass worldwide.

Overall, seagrass meadows have shrunk at a rate of 1 per cent every year since the start of the 20th century, and threatened by human development, further destruction of our blue carbon ecosystems will lead to a double blow, whereby we lose both carbon sequestration habitats while adding to our CO2 emissions at the same time. The benefits of these ecosystems are abundantly clear; seagrass defends against climate change, protects biodiversity, and is home to numerous keystone species. Going forward, blue carbon ecosystems must be afforded a level of protection at an international level and considered in top-level decision making; if we lose them, we really have lost one of our greatest weapons against climate change.