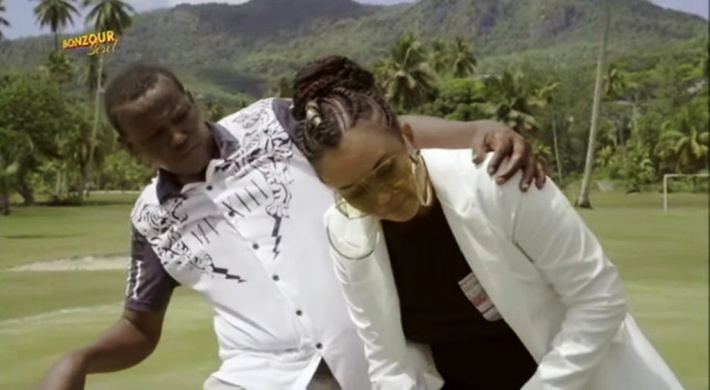 Sly and Joel Servina in video shots of Ou Lanmour

“Ou Lanmour is a true love song which has been made with a lot of love,” Sly said in an interview with the SBC 1. She explained that the song is a collaboration between Xtra Big, Joel Servina and herself who also wrote the lyrics together.

“We wanted a happy song and something different showing how a happy couple spend their time other than walking around hand in hand,” said Sly.

“The song is full of emotion and it depicts real life scenes. Sometimes in life we don’t always get what we want and also at times we do not realise the importance of what we have until we lose it like love for instance,” Sly said, expressing heartfelt thanks to Elijah.

Other than that but what is the local diva up to? Sly said she is now focusing on her own compositions to produce another album. She says she also wants to do some collaborations/featuring with different artists namely Joel Servina and Xtra Big once again as well as other artists.

Sly said so far fans have reacted positively to the two songs which is very encouraging.

Doing music for more than 20 years, Sly’s first hit was Moutya kas Anba which is still very pleasant to hear and brings back lots of old memories.

The singer also talked about the progress she has made over the years, how she has for more than two years taken voice training to upgrade and develop her voice to improve her singing and take it to another level.

“This is a great achievement for me and I feel I have matured,” she said.

Sly joined the Zenith Band some two years ago and she said she is doing great and feeling very happy as it has been an opportunity to develop her voice.

In her music career Sly has five albums up her sleeves but releasing the two singles she said it is something a lot of artists are doing these days..

“Musicians are really discouraged to produce albums these days and this is because of the piracy problem which is severely affecting the music industry. For many years, we local artists, have been calling out for help and support. But is anybody listening to us? Even our own fans are not giving us the financial support by buying our album but often, through a pendrive, which they share among each other and the practice is not helpful at all but discouraging,” Sly said.

Sly went on to note that most artists are at present doing singles because it is more profitable and much easier to promote them.

Eight years ago Sly wrote Mersi Manmi a song to honour her mother on her 50th birthday.

“The song has been a hit and it is still very much appreciated and everything in its lyrics are true as my mother has been through a lot and she suffered so much,” Sly pointed out, thanking all her fans for their support and encouragement..

To make it more interesting she said many people identify themselves with the song and mostly every weekend she is invited to sing the song at birthdays.

Sly has promised her fans that soon she will be back with some surprises for them.