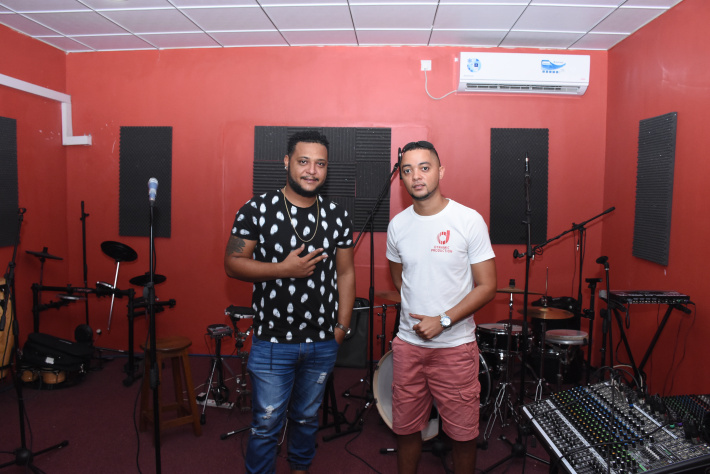 Ion Kid and Mr Payet gearing up for the show (Photo: Anel Robert)

Accompanied live by local professional band Metis, the musical show, dubbed ‘Babadou’, after one of the artist’s recent hits, will also feature popular artists Auspicious and Sandra. Auspicious featured with Ion Kid in ‘Babadou’, which has been for many times this year the number one song on the SBC Paradise FM chart show.

The sit-in show with Richie B as the MC, is being proudly sponsored by Dynamic Production and according to its manager, Sam Payet, the ticket for dinner and show is R550 and the show only will cost R200. Dinner will start at 7.30pm while the musical show will commence at 9pm and will run for one and a half hours to two hours, followed by a short cool off period with a DJ.

All ticket holders will get a welcome drink.

Mr Payet said that tickets are limited as the production company has the approval from the Health Authority to accommodate only 200 people.

He noted that already over 100 people, coming especially for dinner and the show, have already purchased their tickets.

According to Mr Payet, although people coming to the dinner and show will not have to wear mask, they will have to undergo other Covid-19 health procedures such as hand sanitizing, recording of temperature and recording of their names on the log book. As regards to social distancing, he said that sittings will be per known families or known couples and as there will be no dance floor, people will have to move to the groove of the music in their seat.

He noted that there will be enough ushers to serve the guests and that will include for dinner also where the ticket holders will not be allowed to serve themselves.

He claimed that ‘Babadou’ is the company’s first musical show since its launch some eight months ago and it has taken some three months’ preparation.

He said the show at the open restaurant will be comparable to an outdoor show held at the mini stadium and people will not be disappointed.

Mr Payet stated that through his company, based at AMANI Building, Ile Perseverance, he wanted to get people to enjoy themselves a bit during these trying times and also to help artists, whose lives depend on music, to earn some much needed cash.

He said that when the pandemic eases, his company is expected to conduct live shows every three to four months in future.

Ion Kid, who some years ago was part of the group Dezil which made great success in Seychelles as well as in France with their hit song ‘San ou’, said that fans won’t be disappointed as he has prepared a collection of love and morality songs from his old and new repertoire of love songs that will really get them in the mood for the night.

He called on fans not to miss out on the good food and music, and he will also have a surprise in store for them.

People wishing to buy tickets can contact Mr Payet on 2593032 or on WhatsAPP.