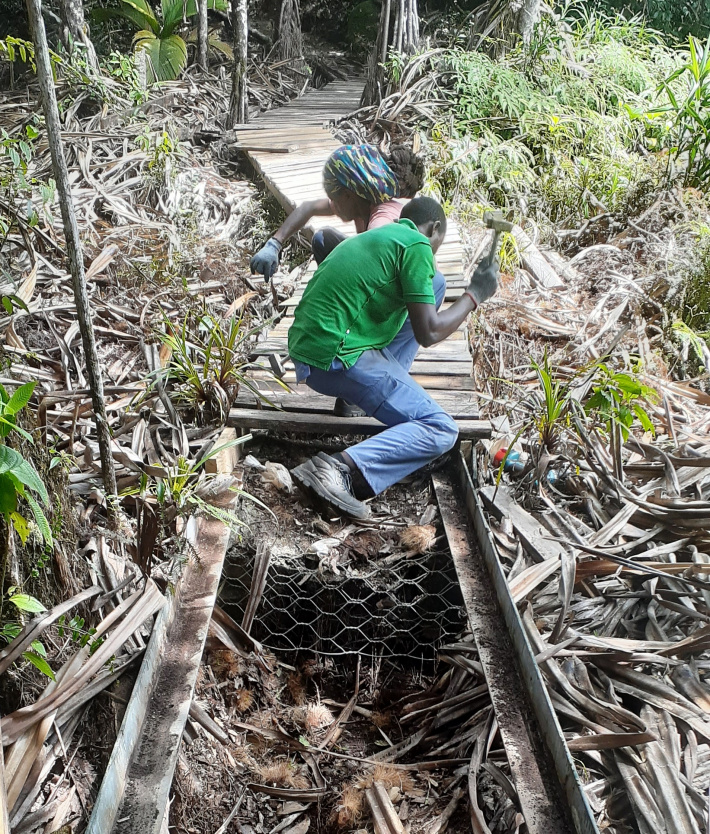 Work in progress on the Mare Aux Cochons trail

The Seychelles National Parks Authority (SNPA) is very happy with compliments received from the public about its recently maintained nature trails.

Seychellois are very pleased with the state of Morne Blanc trail, which the authority took three weeks to complete.

So far, the national parks unit within SNPA, which is responsible for the management of official nature trails in the country, have completed maintenance on the Copolia, Morne Blanc and the Anse Major trails.

It is currently working on the most challenging one, which is the Mare aux Cochons trail.

The nature trail network in the Morne Seychellois National Park covers nearly 30 km. Over the past couple of years, the trails have been in a poor state of maintenance mainly due to a limited workforce and budgetary constraints.

In view of the fact that tourism was and possibly will remain the main pillar of the Seychelles’ economy, the national park unit of the SNPA aims to use this period of low tourist visitation to maintain the trails.

Through an enhanced motivation of the present workforce and the assistance of a couple of Unemployment Relief Scheme (URS) candidates and soldiers, the SNPA has lately been able to do some major maintenance work of some of its trails.

“Our work started in August, where we conducted a trail assessment on the different trails that we received complaints on. The objective was to determine the highest priority trail, which required immediate attention. After our assessment we found out that we have lots of fallen trees and erosion on most of the trails. People were finding it difficult to access the path and they were making lots of diversions and that is not encouraged in our national parks,” explained Ronny Gabriel, heading the national park unit team that is undertaking this major trail maintenance project.

After their initial assessment, the team started working on the Anse Major trail, as they wanted it to be ready for the return of tourists to the island. The trail is normally highly frequented by tourists. On that trail, they noticed encroachment by Chrysobalanusicaco (prin de frans). They had some difficulty due to the construction work by PUC. Vandalism was also noticed on that trail.

Morne Blanc trail was identified as top priority during the assessment. There were many fallen trees and erosion along the path. During their three weeks spent there, the team made changes to the path, to make it safer and easier to access. They did this by making diversion where there were large amount of erosion and fallen trees that were too difficult to remove. The diversions were marked with yellow markers to indicate direction of the path. The team planted trees such as palms and pandanus (vakwa) on open ground to prevent invasive plants from taking over.

Currently the team is working on the Mare Aux Cochons trail network, which is their biggest challenge since it is longer and contain not just one but three paths. Since people were getting lost along those paths, the team has temporarily closed Cap Vert so that they can concentrate on the main path, which is Mont D’Or. During their assessment the team noticed that the two bridges needed urgent repairs, as nearly all the planks were rotten and not safe for users. The path from the marsh to Mont D’Or junction also requires major attention since the trail has been encroached by the invasive Clidemia and Syzyguim (zanboza). Since there were a lot of fallen trees all along the trail and the path is blocked, people have made many diversions in order to access the path. Erosion has also affected the steps built in the past and these need replacing.

“At SNPA we are very happy with progress we have made so far on the trails. I take this opportunity to invite interested individuals who want to volunteer their time and energy towards the work that we are doing to kindly contact Eric Sophola on 4224115. We might not be able to maintain all the trails now but we will do our best to make sure that the ones we are working on are up to standard,” explained Mr Sophola. 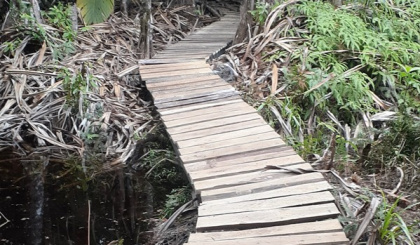