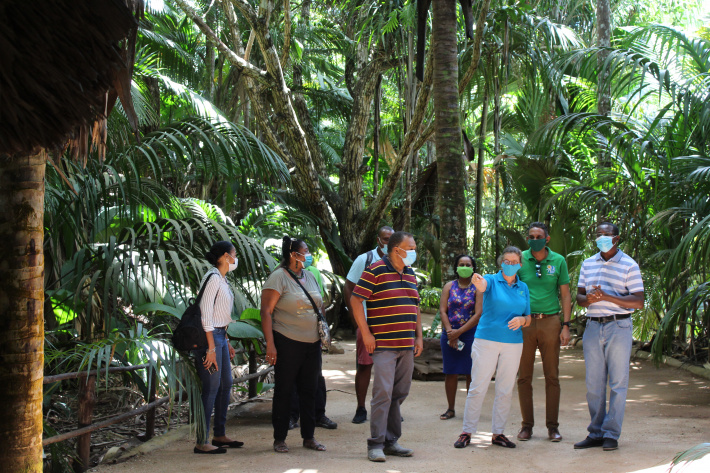 The new Minister for Agriculture, Climate Change and Environment, Flavien Joubert, visited Praslin last Friday whereby he was introduced to various projects, staff and agencies under his portfolio.

He was accompanied by a team from his secretariat as well as the principal secretaries for climate change and environment, Wills Agricole and Alain Decomarmond, respectively.

The first site visited was the rock armouring project undertaken by the department of climate change to protect part of the coastline affected by coastal erosion. The large scope of work is completed and there were suggestions to rehabilitate and enhance the area. There were also proposals to extend the work further to the east towards Grand Anse Praslin, subject to the availability of funding given that part of this coastline is being greatly exposed.

The minister’s next stop was at the agriculture office, Amitie. He was welcomed by the principal secretary for Agriculture, Antoine Marie Moustache, and the chief executive of the Seychelles Agricultural Agency (SAA), Linetta Joubert, who provided information on the services their respective department and agency offer.

The chairman of the Praslin Farmers’ Association, Andre Sopha, and member Anel Marie voiced certain issues and challenges affecting the farmers on Praslin.

This was followed by a short tour of the SAA office where Minister Joubert was apprised of the roles of the various departments.

He subsequently visited the staff of the Biosecurity Agency who provide vet services to the farmers. Stray dogs is a big issue on the island and many farm animals are attacked and killed. The issue was put to the m inister’s attention and he gave his commitment to work with the Agency to help solve this problem.

Minister Joubert thanked all the staff for their support during these past two and a half years, and pledged to continue giving them the necessary support in making Seychelles a cleaner country.

Leaving Grand Anse Praslin, Minister Joubert’s next stop was at the Vallé de Mai which is managed by the Seychelles Islands Foundation (SIF). The minister was welcomed by the chief executive, Dr Frauke Dogley and staff of SIF. The work of SIF is not new to Mr Joubert given that he served on the board for three years. Minister Joubert discussed briefly about establishing the required plan and measures in case there is a fire. He was pleased that SIF has taken over the management of Fond Ferdinand.

Minister Joubert was warmly welcomed by staff of the Fond B’Offay, Environment and SNPA offices. He urged the staff to work hard and diligently to provide support to the public and to meet the targets set by government.

Last but not least, the minister visited Curieuse Island, where he was made aware of the various developments on the island financed by the Protected Finance Area Project. He was pleased with the work and was made apprised of the issues of coastal erosion which continues to batter the island. The damaged wall affected by the tsunami in 2004 can no longer offer the protection to the coast and as a result, it has become more exposed. The Authority had to shift the position of the boardwalk through the mangrove.

Speaking to the press in an interview after the visit, Minister Joubert said he was satisfied with the visit and that though the two portfolios have merged under one ministry they will both receive due attention.

“We are focusing on their roles and responsibilities, and I will provide them the support. I will ensure all staff have the necessary resources and advice so they can deliver the proper and adequate service to the public,” the minister said.

The accompanying photos show some highlights of Minister Joubert’s visits on Praslin. 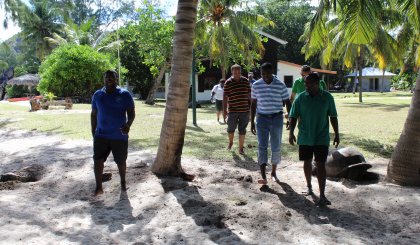 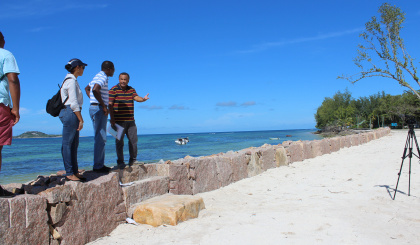