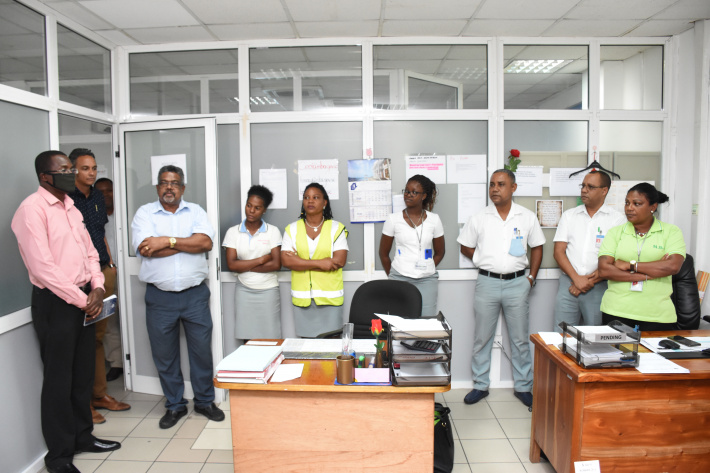 The minister, who has over recent weeks conducted a series of similar visits, commenced at the Seychelles Agricultural Agency (SAA) followed by the National Biosecurity Agency (NBA), two entities responsible for the agricultural sector that have a crucial role in ensuring Seychelles meets food security needs, and who are mandated to oversee local production, and importation respectively.

Chief executive of SAA, Linetta Estico, guided Minister Joubert around the premises, where he interacted with staff of various departments, enquiring of their programmes and policies, and the obstacles the entity is faced with.

As the entity mandated to manage agricultural land, Minister Joubert expressed his own concerns to the livestock department as to the shortage of land for livestock rearing, and further asserting the need to improve in certain aspects of operation including the procurement of stock for famers, such as fertilisers and pesticides.

The second stop, the NBA, was an opportunity for Minister Joubert to be updated about the progress made on the Dog Control and Protection Act, and the programmes geared towards animal and crop health.

It was revealed by chief executive Marc Naiken that human resource is the toughest hurdle for the entity, as well as lack of equipment in some departments. Minister Joubert also addressed the matter of livestock rearing with the agency, revealing that he is pushing for the abattoir to be relocated and for the facility to meet and implement international standards for greater business opportunities, as currently local farmers lose out to imported meat products.

Employees of the agency and who are involved with border control whether at the airport or port, also conveyed their concerns about their safety.

The second part of Minister Joubert’s visits were to agencies under the environment portfolio, namely the Seychelles National Parks Authority (SNPA), the Climate Change Division and the Landscape and Waste Management Agency (LWMA), where he again toured the premises and interacted with employees.

“I think the atmosphere in these organisations is good, there are lots of people who are motivated to work. And at some of these agencies, at NBA and the Climate Change Division, there are many qualified youths who are ready to launch into the large tasks, and I think with this type of people and minds in the organisation, we can work together to deliver on the target set by government,” the minister said.

“I see my role as a directing role, whereby I will bring forth to these organisations the national objectives government want to realise for the country, and work with them so their departments deliver, without me as minister interfering in their work to create confusion or offset anyone in their work,” Minister Joubert said upon concluding the visits.

Based on yesterday’s interactions, Minister Joubert asserted the functions of boards for entities directed by boards, stating that boards should fulfil their functions and work closely with employees so as to direct the organisation to perform and achieve results.

Furthermore, Minister Joubert, following in the footsteps of President Ramkalawan, committed to initiating changes within the organisations to foster an open-door approach with employees, not only for employee welfare, but most importantly, for effective, efficient and prompt service delivery.

Minister Joubert’s familiarisation visit programme is scheduled to resume on Monday where he will visit the Seychelles Meteorological Agency (SMA), among other facilities. 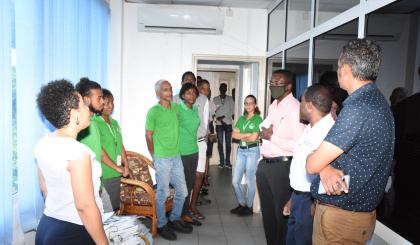