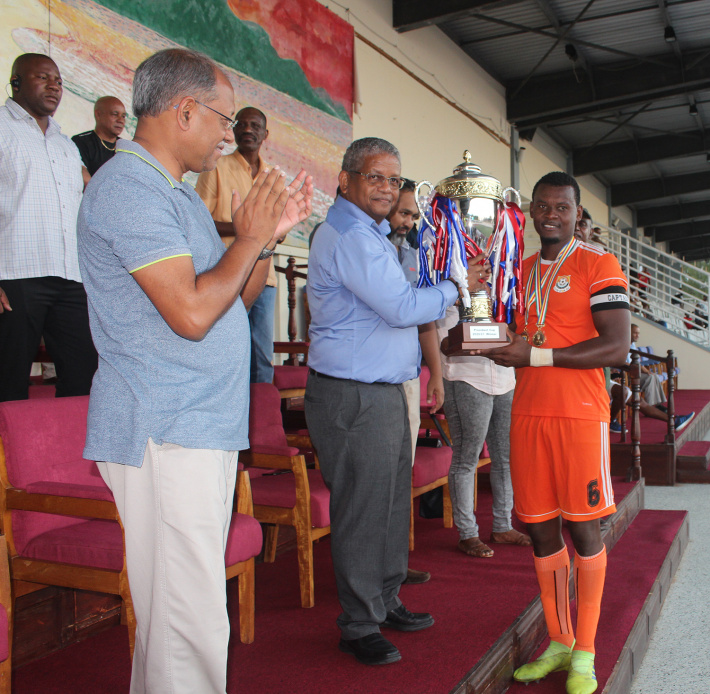 Praslin side Côte d’Or have retained the President’s Cup thanks to a 1-0 win against Foresters in the curtain-raiser match of the 2020-2021 season and played on Saturday afternoon at Stad Linite.

Foresters should have broken the deadlock as early as the 5th minute from a mistake by Côte d’Or defender Gervais Saminadin across his goalmouth which was pounced upon by Nigerian striker Kazeem Adeyeri but he shot agonisingly wide much to the relief of the dreadlocked defender.

Côte d’Or had a decent chance in the 20th minute after Foresters defender Warren Mellie was penalised for a handball on the edge of the penalty area but Nigerian midfielder Peter Adeshina curled his free kick into the gloves of goalkeeper Kitson Cecile as the first half ended goalless.

Foresters were gifted another goal scoring opportunity in the 50th minute as Saminadin lost the ball to Leroy Corallie who intercepted the pass to round goalkeeper Lesperance but he hurried his shot and amazingly shot wide and was then substituted seven minutes later.

Côte d’Or also brought on Malagasy Charles Rakoto in place of countrymen Kassah and they should have taken the lead in the 66th minute when Malagasy Jonas found space on the right to pull his cross to Collin Esther who surged into the Foresters penalty area but shot straight at goalkeeper Kitson Cecile to fluff a gilt-edge opportunity.

In the 70th minute, Collin Esther threaded a superbly weighted pass to Leroy Monnaie who held off the challenge of defender Warren Mellie but shot over the crossbar with the goal at his mercy.

Monnaie missed another good chance in the 75th minute after substitute Rakoto floated the ball onto this head but his header crashed against the crossbar from close range when he should have done better.

Two minutes later, there was some controversy as Monnaie latched onto Jonas’ through ball but went down as Mellie got close to him and surprisingly referee Elderick Adelaide pointed to the spot for a penalty and it was rather a soft penalty decision.

Foresters protested but it was to no avail as Rakoto stepped up to send goalkeeper Kitson Cecile the wrong way for a 1-0 lead.

Foresters had to throw caution to the wind as the minutes ticked away and they had a glorious chance in the 89th minute from new recruit Jean-Yves Ernesta who lofted a corner to Adeyeri but he could not direct a free header on target.

The league and cup winners had a final opportunity to level matters in the 94th minutes as they laid siege to the Côte d’Or penalty area and Ernesta’s cross fell to Adeyeri who teed Mellie in the penalty area but he rifled way off target as Côte d’Or held on to give their new head coach Basil Hoareau his first piece of silverware and he was really pleased with his team for battling to retain this title.

President Ramkalawan and his delegation even joined the players of Côte d’Or on the pitch to take souvenir photos with the cup winners and Sports NATION would like to congratulate them on retaining the curtain-raiser cup.

What they said after the match

President Wavel Ramkalawan: “Foresters started well in this match but I feel Côte d’Or came more prominent in the second half where both teams had good chances to score and it is a pity that this match had to be decided by a penalty.

“Nonetheless I would like to congratulate Côte d’Or as well as Foresters for their performance I would like to take this opportunity to state that I have accepted to be the patron of Seychelles football after I was asked by Seychelles Football Federation president Elvis Chetty. It is to note that having been a former footballer in the first division, I feel honoured to be offered this role which I hope to serve with much pride.”

SFF chairman Elvis Chetty: “Firstly I would like to seize this occasion to congratulate Côte d’Or on their victory today and also thank Foresters for being very combative and sportive during this match. On behalf of the SFF, I would like to thank President Ramkalawan, Vice-President Afif and Sports Minister Zialor for being present to support our national sport and a big thank you to President Ramkalawan for accepting to be the Patron of Seychelles football which is very encouraging for our sport.”

Basil Hoareau Côte d’Or coach: “We started slowly as we were rather cautious and wanted to study our opponents but we changed our tactics in the second half as we deployed our captain Benoit Marie in midfield and we were more in control and got a goal from the penalty spot and for me, this is a good start to my job with this new club and it will be a good morale-booster for the team for this season.”

Foresters coach Harold Hoareau: “I’m disappointed with the penalty decision as it was rather a soft decision and we had our moments in this match but we did not take them. However, I feel we could have done much better and I’m not happy with our overall showing in a match that we could have won.” 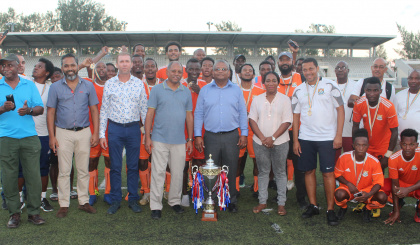 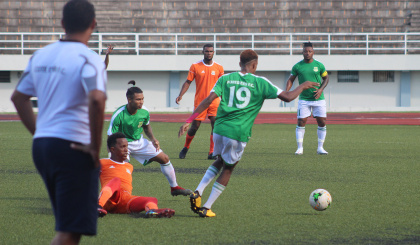 Both teams made a slow start to the season