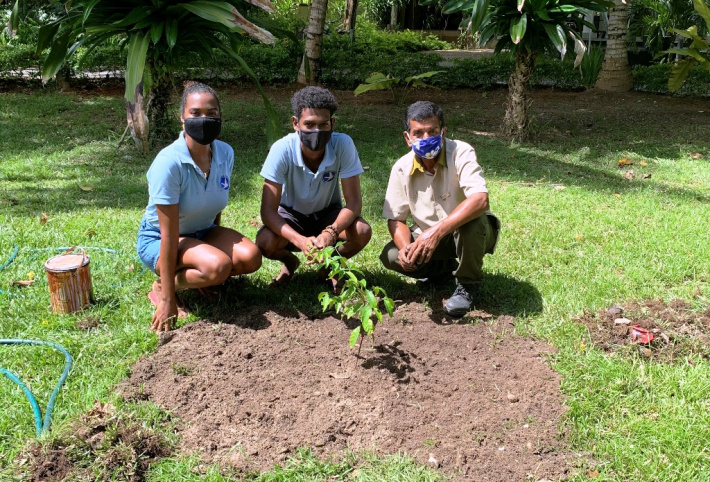 The Island Conservation Society (ICS) team on Silhouette has successfully grown and propagated a plant species endemic to the Seychelles, commonly found on most granitic islands during the early 20th Century such as on the woody hills of Felicité, Mahé and Praslin. It was thought to have disappeared due to land development and other factors, but this is not entirely true, since the same plant species can be found on Aride Special Reserve – an island which is ecologically managed by ICS.

Wright’s Gardenia (Rothmannia annae) commonly known as Bwa sitron in Creole, was derived from the French word ‘bois citron’ meaning ‘lemon tree’ due to its similarity of the fruits to those of the commonly known Lemon. Bwa sitron, which is considered as one of the most beautiful endemic trees in the Seychelles with its heavily scented flower, is currently on the IUCN red list because it is a very rare and critically endangered species.

This small shrub was originally found on Aride Island, in the late 1990s and early 2000. Bwa sitron was introduced to other granitic islands including Silhouette so as to further increase the diversity of this species as part of a national forestry restoration programme.

Earlier during the year 2020, ICS conservation team on Silhouette took the initiative to grow more Bwa sitron before they are propagated across the plateau and woodland areas. Around 25 mature seeds were collected from Aride Special Reserve and was brought to Silhouette. The team followed the necessary procedures for seed propagation and 15 out of the 25 seeds were successfully grown in ICS plant nursery.

On November 9 in collaboration with Hilton Labriz Resort and Spa, the team planted 5 Bwa sitron seedlings in the hotel area. The rest of the seedlings will be planted along the inhabited Silhouette plateau and other suitable areas. The plants will be closely monitored by the ICS team to ensure a healthy and successful growth.

This initiative is part of a greater effort to eradicate the introduced and highly invasive tree, the Spanish Cherry (Mimusops elengi), which is largely confined to areas across the La Passe plateau presently, but is showing signs of naturally spreading in the forest at Grande Rivière behind La Passe. Replacing Spanish Cherry with native species such as Bwa sitron will not only help increase its population size and diversify the plant community structure, but also with beautiful scented flowers showcase how endemic and native species should be used in landscaping. 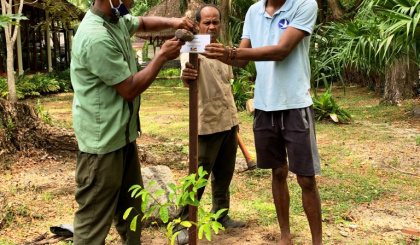 Putting up the name tag 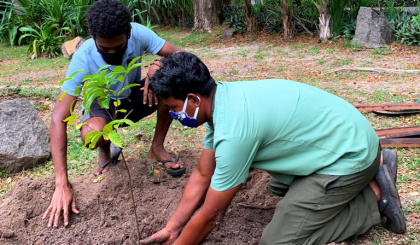 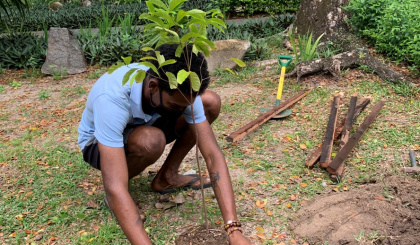 Out the bag, straight in the ground