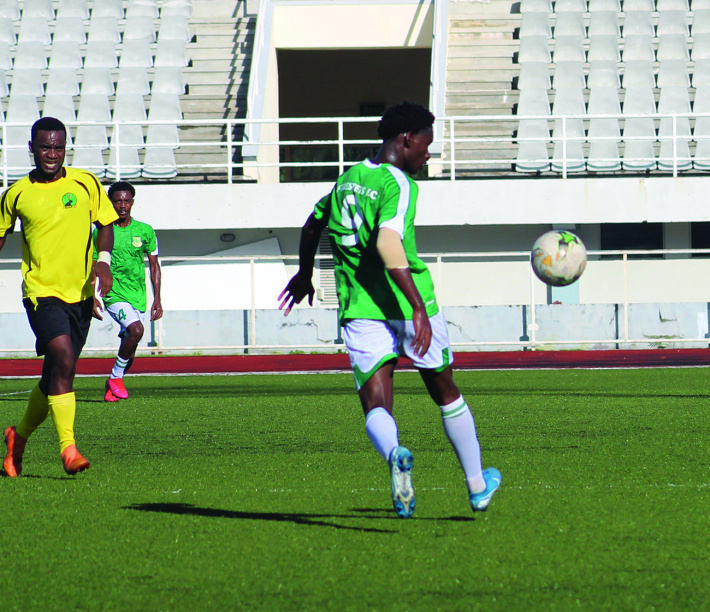 Foresters bounce back against Real Maldives

This was a meeting between the league winners of the top two divisions and Foresters were keen to bounce back after losing to Côte d’Or in the President’s Cup the weekend before.

Foresters rattled Real Maldives’ crossbar as early as the 2nd minute from Lawrence Leon’s throw-in to Elvin Estico whose cross-cum-shot came off the bar.

Foresters though were denied a clear penalty after Jean-Yves Ernesta sneaked in behind the Real Maldives defence to collect Malagasy Leonard Besabotsy’s well-weighted pass but he was hit in the face in the box and went down on the impact which should have resulted in a spot kick but referee Kerens Yocette was not convinced.

In the 35th minute, Besabotsy thumped a fierce 25-metre free kick at goalkeeper Madrid Adrienne who pushed the ball over the crossbar for a 0-0 score at half-time.

Foresters pulled off the injured Besabotsy and in came Leroy Corallie at the start of the second half but it was Real Maldives who almost opened the scoring in the 47th minute as Aubrey Francourt threaded a pass to Jean Delor Tsaralaza who was clean through but Foresters goalkeeper Larue was quick off his line to clear the danger whereas his defender Warren Mellie mopped up at the back.

Foresters then went ahead in the 53rd minute after some intense pressure when Ryan Henriette shot against the foot of the post Ernesta’s lay-off and the same Ernesta picked up the loose ball to square to Corallie whose shot went in off a Real Maldives defender for a 1-0 lead.

In the 64th minute, Ernesta was fouled by Real Maldives substitute Terence Crea and the former St John Bosco winger floated the ball into the penalty area where Corallie glanced his header into the roof of the net to make it 2-0.

The reigning league champions sealed the victory 10 minutes later as Henriette collected a cross field pass from his captain, Malagasy Jean Tigana which he controlled before rifling it into the roof of the net for a 3-0 scoreline which was well received by coach Harold Hoareau at the final whistle.

Coach Hoareau was nonetheless disappointed that he was not made aware that they were allowed five substitutions instead of three especially as substitute Francis Nourrice was injured but had to soldier on for the last 15 minutes as they had already made three substitutions.

“It was a good result as we returned to winning ways though our opponents resisted in the first half but we knew once we would score, we would break their resistance though I’m unhappy about the number of substitutions issue,” the Foresters coach told Sports NATION.

As for Real Maldives assistant coach Brian Ravinia, he felt his team’s lack of experience at this level cost them the points.

“It was not a bad showing but we just lacked concentration at crucial moments in this match and I feel we could have avoided conceding all three goals. In turn, we could have done better with more concentration throughout the match,” the Real Maldives assistant coach said.

LightStars fight back to beat Revengers

LightStars had to come from behind to beat Revengers 3-1 in the Inner Islands SeyPearl Premier League on Saturday afternoon at Stad Amitié.

Revengers though took the lead in the first half through Heddy Esther to make it 1-0 but LightStars fought back to level matters at 1-1 courtesy of a strike by Malagasy striker Paul Bruyelle.

Lightstars scored a second goal on the stroke of half-time through a penalty awarded by referee Emile Fred and it was converted by defender Fabio Lemiel for a 2-1 score at the break.

The players of coach Neddy Rose had a great chance to level the score as they were awarded a penalty but former Côte d’Or defender, Malagasy Zenith saw his spot kick saved by goalkeeper Romeo Barra and substitute Jeron Joubert added a third goal for a 3-1 final scoreline as the players of coach Ted Esther held on for all three points.

Anse Reunion had a point to prove to their former coach Basil Hoareau who joined Côte d’Or this season and led them to the President’s Cup win last week.

The La Digue team broke the deadlock as early as the 2nd minute when they won a penalty awarded by referee Elderick Adelaide and it was coolly tucked home by Malagasy striker Iavo.

Iavo doubled the score a couple of minutes later to make it 2-0 at half-time and though Côte d’Or enjoyed more of the ball, they could only manage to reduce the score late in injury time in the second half with a goal from former Anse Reunion defender Cliff Cesar for a final 2-1 score.

However, there are reports that Anse Reunion may lose all the points as their opponents plan to protest that the La Digue club fielded a player who was ineligible due to a red card picked up in their last match last season.

Sports NATION will follow this incident and keep its readers informed on the outcome of this case.

This was a closely fought battle between these two great rivals and chances were few and far between with Norris Bibi going close with a spectacular kick which sailed narrowly wide in the 23rd minute from Ramely Pascal’s free kick.

St Michel though were the more dangerous side and in the 63rd minute, Malagasy Evariste released his captain and compatriot Hassan Aly whose thunderous shot crashed against the Red Star Defence Forces crossbar with goalkeeper Raphael Moustache well beaten.

The players of coach Nigel Moustache finally broke the deadlock in the 86th minute from captain Aly’s free kick which goalkeeper Moustache came out to punch as far as Evariste who punished him by drilling the ball into an empty net for a 1-0 score.

Red Star Defence Forces had a gilt-edge opportunity to equalise in the 91st minute from Malagasy Jocelyn’s inswinging free kick which flashed across the St Michel goalmouth with no one anticipating as the match ended on a 1-0 final result which was a welcome result by the St Michel manager Andrew Jean-Louis.

“It was important to kick off the new season with a victory, to underline our intent to aim for the title and today we had the edge in this tightly contested match and deserved to win,” the St Michel manager related to Sports NATION.