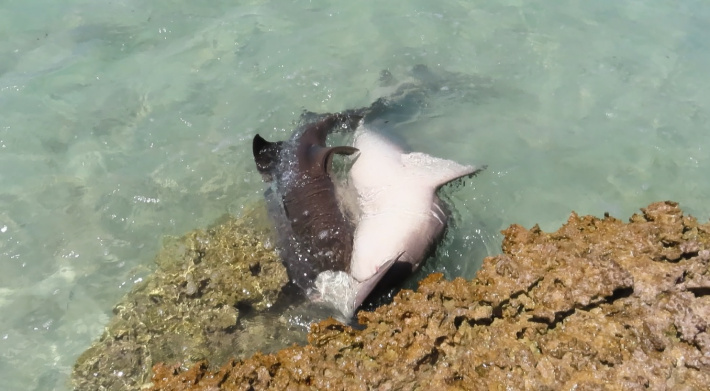 Nurse sharks, known as Landormi in creole, are a large bottom dwelling shark which do not pose any threat to humans. They primarily feed at night, targeting a broad range of species including small fish, crustaceans and cephalopods (octopus and squid). They typically receive less fishing pressure than other species of shark due to their poor quality meat, as a result they are frequently seen by water users.

Farquhar atoll, the most southerly location in Seychelles and the largest true atoll, provides a perfect environment for this species, which like to inhabit sandy lagoons and reef slopes from depths of 1-70 metres.

The Island Conservation Society (ICS), which set up a Conservation Centre on Farquhar in 2014, has observed Nurse sharks displaying courtship and breeding behaviour consecutively for the last three years between October to December. At this time of the year, adult sharks around 2-2.5 metres enter the shallow flats where they swim lazily, neither hunting nor showing obvious signs of interaction. This behaviour has been observed for up to two hours, before the dropping tide forces them to retreat to deeper water.

After spending both days of the weekend (November 7 – 8, 2020) observing the sharks, conservation officer Matthew Morgan was finally rewarded the following Monday (November 9) while carrying out a turtle patrol, witnessing the full courtship event first hand.

The event began with a shark swimming unusually fast behind another, triggering it to flee. This turned out to be a big male chasing a female. The male herded her into a shallow pool fringed by beach rock, around 4 metres from the shore. The female retreated under a small overhang, followed by the male. He then nudged her body repeatedly before clamping her pectoral fin in his mouth and flipping her over. The female was held in a belly-up position for several seconds before righting herself and dragging the male into the same position, who was still holding onto her fin. After several frantic rolls the male gained the upper hand (or upper fin in this case). While held on her back, the female would have slipped into tonic immobility, a biological quirk of sharks that puts them into a kind of paralysis when held in this orientation. This gave the chance for the male to insert one of his two claspers (external reproductive organs) into the females vent, bringing both sharks the right way up and into a resting position on the sand. After several minutes of sitting side by side, the sharks parted but the male continued to display the same behaviours, suggesting mating may not have been successful. Soon after the sharks parted to resume lazily swimming in the breaking waves of the shallow water.

Nurse sharks are ovoviviparous, meaning the pregnant female will retain her eggs until they hatch, giving birth to around 25-32 free swimming pups after a six-month gestation period. After this event she will not reproduce again for 18 months.

Events such as this are what makes the outer islands so important for Seychelles, the pristine environments provide sanctuaries for nature to flourish, protected by their remoteness and minimal disturbance. It is likely that these sharks have been coming to this particular location for many years and will continue to do so.

The accompanying photos show some highlights of the sharks’ courtship event. 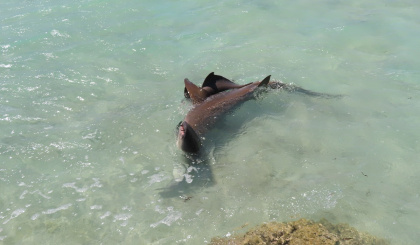 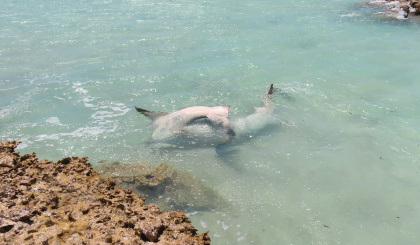