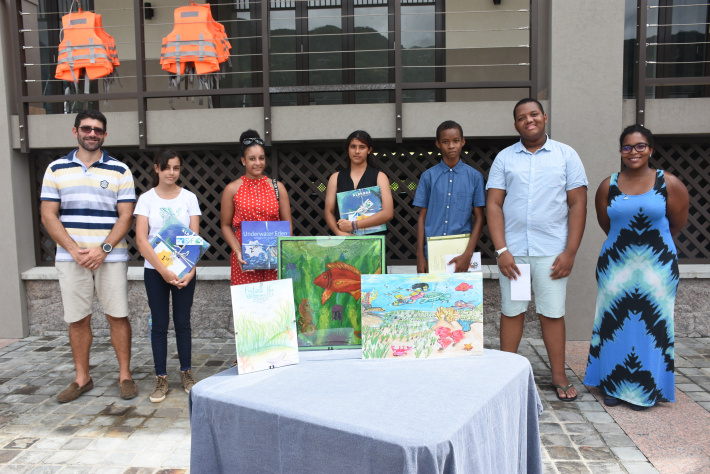 The winners in a souvenir photograph with members of the organisers (Photo: Thomas Meriton)

Prize winners of the art and poem competition entitled ‘The Voice of the Seagrass Meadows’ launched in November by the Conservation and Climate Change Adaptation Trust (SeyCCAT) have been rewarded.

They received their prizes during a small presentation ceremony at the Semi-Sub embarkation point, Eden island Marina, on Saturday morning.

The competition, launched in November in commemoration of SeyCCAT’s fifth anniversary, aimed to engage the secondary school students in using art to illustrate their understanding of seagrasses and their feelings and thoughts on its importance in combatting climate change.

A total of 43 submissions from six secondary schools on Mahé were collected at the end of the competition.

For the poem competition, first prize went to Tara Michel of International School Seychelles, second to Chiara Florentine of Anse Boileau, and third to Alvio Elizabeth of Mont Fleuri.

Tara, who usually goes on dives with her father, entered the competition as a way to educate others about the importance of protecting the environment, and especially Seychelles’ marine life.

“Me and my dad go diving quite a bit, and when we first started going, I saw that the corals were bleached and he started to get me interested in the environment and environment protection. I’m proud of the outcome and happy to have won, as it took quite a while for me to write the poem,” she said.

As for the art competition, Leanne Barallon of Anse Boileau clinched first prize, followed by Mielle Abel also of Anse Boileau and Eric Oreddy of Mont Fleuri who secured third prize. Eric says he has learned a lot through his research for his poster about seagrasses.

“I heard about the competition and researched about it on the internet, where I learned how important it is in providing a habitat for many fish and food for sea turtles. It also removes carbon and provides oxygen for the ocean,” he said.

During the ceremony, chief executive of SeyCCAT, Angelique Pouponneau, thanked the competition winners for having creatively iterated the importance of seagrass through creative poems and posters, which are to be featured and showcased in sensitisation campaigns to educate the general public about the important habitat which seagrass provide for other marine life.

She also revealed that the competition is part of a larger project which seeks to establish how much carbon is stored by seagrass in Seychelles’ Exclusive Economic Zone (EEZ).

Seagrasses are marine plants that absorb carbon and gives off oxygen. Through the project, scientists can establish a baseline as to the quantity of seagrass and from there calculate how much carbon is stored. The mapping exercise is scheduled to begin in February 2021 and will last for eight weeks. Divers, cameras placed under boats and remotely-operated vehicles will be employed to facilitate the mapping around Darros, Desroches and five further outer islands. 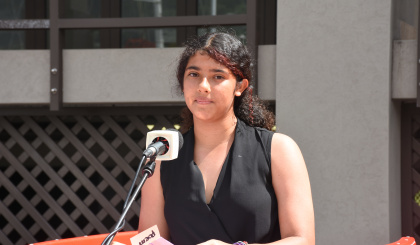 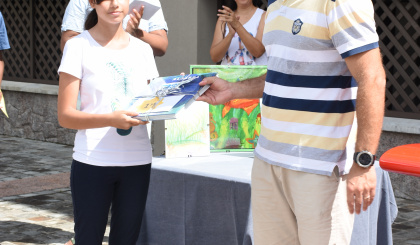 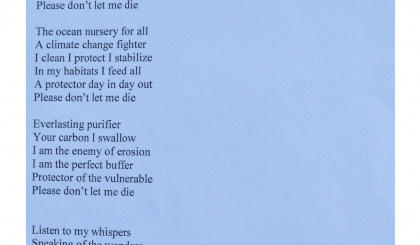 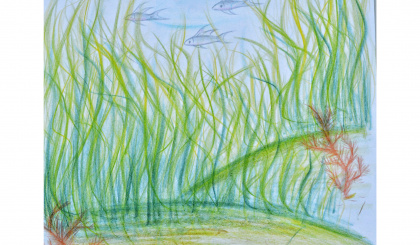